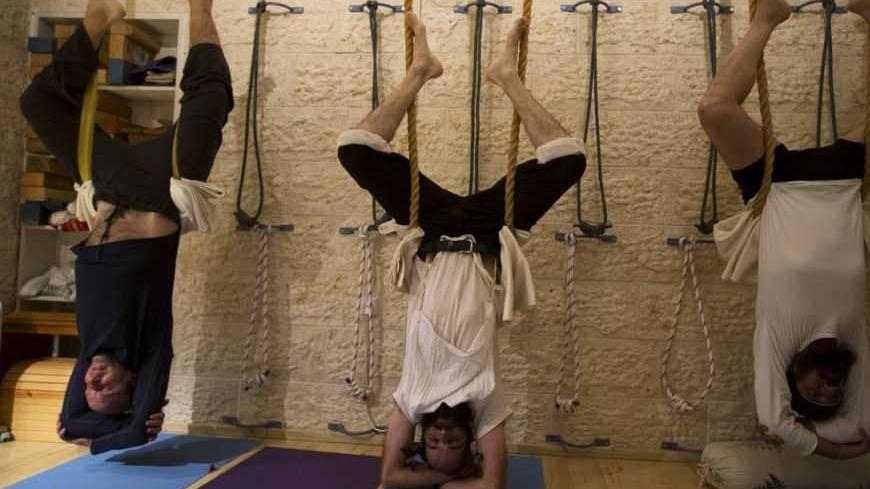 Ultra-Orthodox Jewish men take part in a yoga class at a studio some 12 miles from Jerusalem, Jan. 1, 2013. The studio offers gender separated classes in accordance with the religious beliefs against mixing of the sexes in public. - REUTERS/Ronen Zvulun

The Likud lost power twice since its mythological leader, [Prime Minister] Menachem Begin, took over power from the absolute rule of the Maarah (today’s Labor Party) in the historic 1977 upset. Both times voters sent the Likud back to the opposition benches of the Knesset because it had placed Israel on the opposition benches of the world stage. In 1992 voters punished the Likud, headed by [Prime Minister] Yitzhak Shamir, for its role in the clash with President George Bush (Sr.) over the settlements. Seven years later, the electorate ousted Benjamin Netanyahu from the prime minister’s office (in his first term), after President Clinton slammed the door to the White House in his face.

No more. According to the polls, as of 2013 the tables have been turned; a heavily invested four-year campaign of fear — of the Iranian nukes, of Palestinian terrorism, of the Islamization of the Arab Spring and of the “hypocrisy of the world,” has borne fruit. The Israeli public is expected to strengthen the hold of the right wing on power and to vote against the world, and what is even worse — against the United States.

The phenomenon is no secret and has been reported by the media on more than one occasion, on this site, as well. But the question is why the public is not punishing its leaders for their contempt of Israel’s strategic asset, its relationship with the United States. Why, the more Netanyahu pummels Obama, the stronger he gets?

The main reason for the growing strength of the right wing, and I assume its supporters would agree, is not some extraordinary success on the defense, economic or social fronts, and certainly not on the diplomatic one. Nor can the weakness of the left and the split in its ranks explain Netanyahu’s expected victory in the elections. I contend that the secret of the growing power of the so-called “national camp” lies in the deep currents flowing into the core of Israel’s being, in two spheres: demographics and cognition.

Israeli politicians, mainly from the right, often mention Palestinian textbooks which, they claim, are riddled with hatred for Israel, searing the consciousness of the children in Nablus, Hebron and Gaza. There may be some truth to what they say, but they ignore the fact that there’s another side. Our textbooks and official Israeli maps make no mention of the Green Line [the 1949 demarcation lines drawn between Israel and its Arab neighbors]. Since the Six Day War [1967], the Israeli establishment and the school system have been drumming right-wing messages into the brains of Israeli children. For example, they are told that the areas of East Jerusalem annexed following the Six Day War are an inseparable part of the “unified Israeli capital”. For dozens of years children have been told that Hebron is the “City of our Fathers” and Ariel is not a settlement but “the capital of Samaria”. Both the public and commercial media have long ago substituted “Judea and Samaria” for the term “West Bank” and turned the settlements across the Green Line in East Jerusalem into “Jewish neighborhoods”.

These are the results: the “Peace Index” of Tel Aviv University’s Steinmetz Center, published in 2004, showed that 51% of Israeli referred to the West Bank and Gaza Strip as “conquered areas”, and only 39% disagreed. In 2008, a majority of the Jewish public (55%) defined the West Bank as “a liberated area” and only a minority (32%) said it was conquered.

A study by Professor Daniel Bar-Tal of Tel Aviv University and Eran Halperin of the Interdisciplinary Center in Herzliya, published in 2010, showed that the average Israeli holds entrenched views and ideologies. He seals himself off from facts and views that threaten to undermine his belief in his country’s just ways and internalizes a one-dimensional ethos based on the delegitimization and dehumanization of the Palestinian side.

Even when presented with favorable information, which on the face of it could advance a solution to the conflict, such as the 2002 Arab peace initiative, Israelis tend to ignore it dismissively. In tandem with the changing state of consciousness, Israel is undergoing a significant demographic change, stemming mainly from the growing Haredi [ultra-Orthodox] and religious sectors and the influx of immigrants from the former Soviet Union.

The significance of the first is reflected in a 2005 poll conducted on the 10th anniversary of the Rabin assassination: 62% of secular Israelis said at the time that entering into the Oslo was the right decision. On the other hand, more than 70% of the Haredi and religious Jews said it was a mistake. The relatively high birthrate among these groups (with children from non-religious families, becoming a minority among first graders), their high voter turnout and their homogenous ideology are steadily increasing the strength of the right.

The influx of immigrants, which was at its height two decades ago, created an additional substantive demographic change in the political profile of Israeli society. In the 1992 elections, the Labor Party and Meretz (which is today the only remaining left-wing Zionist party; polls show it is expected to win four Knesset seats, at best) got 56 Knesset seats [out of 120] and formed the government that signed the Oslo Agreement; 17 years later, when the immigrants translated their numbers into votes, both parties, together, garnered only 16 seats. In polls conducted ahead of the 2009 elections, 72% of the Jewish respondents defined themselves as “right wingers”. The 1.5 million immigrants of the past few decades, some 20% of the electorate, gave Labor and Meretz no more than 5% of their votes.

The “Democracy Index” conducted that year indicated that the immigrants tend to hold less than average liberal and tolerant views in almost every area. Thus, for example, 77% of the immigrants from the former Soviet Union who were surveyed said that [Israeli] Arabs should be encouraged to emigrate from Israel.

As a result of the altered consciousness and demographics, the factors that twice brought about the removal of the right from power are no longer effective. After the elections, the powerful settlers’ lobby in the next [government] coalition can be expected to use its influence and force Netanyahu to prefer a right wing-Haredi coalition to a center-right coalition. The rise of a hard-line, right-wing ideological core to the leadership of the Likud in the recent primaries and the union with the Ysrael Beiteinu Party, will make it hard for Netanyahu to adopt a pragmatic policy that takes into account the effects of the occupation and the settlements on Israel’s international standing. In other words, [President] Obama can keep on waiting.

Stronger, contradictory currents are needed in order to bring about a significant political change, such as a political crisis over the deep, looming budget cuts, but it appears that this will not suffice, either. After all, in defense-oriented Israel, the economy always takes a back seat.

The simple and painful truth is that given the current demographics and state of consciousness, only massive international pressure, of the kind that we have never known, might convince the country’s residents that the price of continuing to be an occupying power is more painful than the price of a peace accord.