Akiva Eldar reports that the Israeli Ministry of Strategic Affairs has tried to prevent publication of the results of a study on Israeli textbooks. 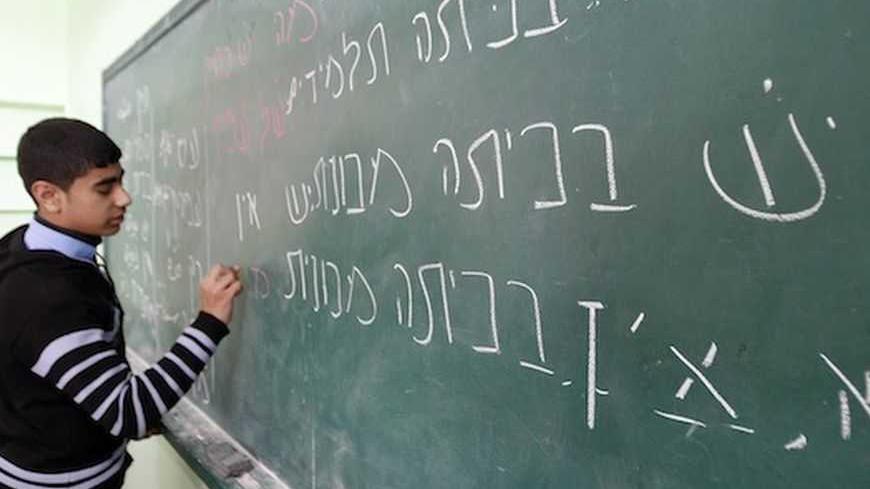 A Palestinian ninth grade student writes on the blackboard during a Hebrew class at a Gaza school in Gaza City, Jan. 28, 2013. - REUTERS/Ahmed Zakot

Israeli public diplomacy is about to lose one of its trump cards — the argument that "Palestinian" textbooks are fraught with incitement and delegitimize the other side. This card is always played after the "there-is-no-Palestinian-partner" joker. A new US-government-funded study undermines this argument, to great uproar in Israel. The study reveals that though Israeli textbooks don't contain explicit incitement, they are guilty of marginalizing the other side. It may be that the Palestinian side has more incitement towards hatred, but when it comes to the Israeli side, incitement sometimes comes in the form of erasing "the other." In other words, "We're the only ones here, and the other side has no history, geography or political existence."

Al-Monitor has learned that upon receiving a copy of the study, the Ministry of Strategic Affairs, headed by Moshe Ya'alon, went to great lengths to prevent its publication, scheduled for this coming Monday, Feb. 4.

The Ministry of Education has also marshaled its forces against the study, with whose authors it refused to cooperate. Publishing a strongly worded statement, the ministry said that the "study was biased, unprofessional and seriously lacking in objectivity." The statement continues, "Clearly, this was a 'study' whose results were known even before it was professionally conducted, and it certainly does not reflect reality in a credible manner."

The Ministry of Education further questions the "attempt to make a comparison between the Israeli educational system and the Palestinian one — a comparison which is baseless and groundless. The Ministry of Education had chosen not to cooperate with people seeking to slander the Israeli educational system and the State of Israel. The outcome of the 'study' suggests that the decision not to cooperate with these people was correct and justified."

Its reaction reveals the strong resentment the study has elicited among Israeli officials, who refused to cooperate with the researchers in keeping with Jerusalem's official line.

But why were these government ministries so angry?

This was a comprehensive study as part of a project launched three years ago by the Council of Religious Institutions of the Holy Land in Jerusalem (CIHRL). This organization includes senior religious figures from the three monotheist faiths. Its findings were due to be published by May 2012, but following Israeli pressure, publication was put off to February 2013.

Headed by Professors Bruce Wexler of Yale University, Daniel Bar Tal from the Tel Aviv University and Sami Adwan from the University of Bethlehem, the team of researchers reviewed the depiction of the "other" in Israeli and Palestinian textbooks. The data was gathered by ten researchers, five Israelis and five Palestinians. They reviewed and studied hundreds of textbooks from both sides over a three-year period. They conclude that the Israeli educational system has no reason to put a feather in its cap. As far as Al-Monitor could learn, the study did not find dramatic differences in how Israeli and Palestinian textbooks portray the other.

In advance of the official publication of the study's findings early next week, Ya'alon's associates quickly called into question the researchers' credibility. As noted, in recent days there has been an attempt to delay publication of the study. The prime minister's office understands that the study's findings are not in keeping with their boss's picture regarding the issue of incitement. In a question and answer session by the Ha'aretz website earlier this month, Ya'alon said, "Quite a few studies were carried out to compare Israeli and Palestinian textbooks. Unequivocally, Israeli students are brought up in the spirit of peace while Palestinian children are brought up to hate Israel and embrace jihad. These are the facts. You don't need a committee for that. Let them take those textbooks and deal with them."

The US Department of State, which funded this study with a $500,000 grant, capitulated to senior government officials' demand to delay publishing the findings until after Israel's Jan. 22 general elections. It's hard to understand why, after so many years of the prime minister's office lodging complaints and warnings against incitement in the Palestinian educational system, the Israeli side is the one to seek to postpone the publication of this comprehensive study.

A report presented by the Ministry for Strategic Affairs last December contended that "most maps in Palestinian Authority textbooks do not designate Israel or include the Green Line. Even on maps that do show the Green Line, Israel's name is deleted."

Yet the ministry has now learned that a comprehensive study, funded by the US government, indicates that Israeli textbooks also ignore the Green Line, the line that separates the sovereign Israel from the West Bank and East Jerusalem. Deputy Prime Minister Yigal Alon ordered the Green Line expunged from all the official maps as early as the 1970s. The omission of the Green Line is obviously not just a technicality: this was a salient way to brand into the minds of Israel's youth the message that all the areas of the land of Israel — from the Jordan River to the Mediterranean — belong only to the people of Israel and that the Palestinian people have no political or historical claims for any part of that land.

This isn't the first time that the ministry has countered attempts to put Israeli and Palestinian textbooks on the same level.

During his first term in office, 15 years ago, Prime Minister Benjamin Netanyahu "discovered" the potential of Palestinian textbooks. The fact that during those years the Palestinians used Israeli and Jordanian textbooks didn't stop him from translating them into a public diplomacy effort, citing them as the ultimate proof that the Palestinian Authority teaches its children to hate Israel. (The Palestinians started producing their own textbooks, under European funding and supervision, in 2000.) At the 1998 Wye Plantation triad summit meeting with then-US President Bill Clinton and Yasser Arafat, it was decided, following Netanyahu's demand, to set up a tripartite Israeli-Palestinian-American committee to examine the issue of incitement on both sides.

When the second intifada broke out, at the end of 2000, the committee's work was discontinued and has not been resumed. In the past several years, Palestinian President Mahmoud Abbas has conveyed both implicit and overt messages urging the resumption of the committee's work, regardless of the conditions for renewing talks on the permanent status agreement. He appointed Nabil Shaath, a senior PLO member, to head the Palestinian team. Former Canadian Minister of Justice and Member of Parliament Irwin Cotler told me over a year ago that he himself had relayed a message to Netanyahu from Abbas to the effect that the chairman of the Palestinian Authority was willing to resume the work of the committee summarily. According to him, the prime minister replied that he welcomed the initiative, but he had not been heard from since.

In response to a question by the executive director of OneVoice, Tal Harris, who has tried to promote the resumption of the tripartite committee, Ya'alon recently gave a new explanation to Ha'aretz for why the committee remains inactive. Unlike the version he delivered to Knesset Member Ilan Gilon from the Meretz Party two years ago, to the effect that negotiations to resume the committee's work were under way, this time Ya'alon said, "It's the Americans who are opposed to resuming the committee's work, saying it's a waste of time. They're right." In a reaction to that, a high-ranking American official told Al-Monitor: "Israel has never submitted a request to resume the work of the committee for the prevention of violence, so the United State could never have therefore rejected it. Naturally we are prepared to work with both sides in a constructive effort to combat incitement."

Likud Party campaign ads proudly declared, "When Netanyahu talks — the world listens". Indeed, Netanyahu has for years brandished the Palestinian incitement card, and the world — or at least the US Congress — has listened, as was evidenced by the ovations in response to Netanyahu's May 2011 address to Congress. The new study might make Netanyahu listen to the voice of the "other Palestinian," and to how they are portrayed to the public which he shepherds and in the textbooks his children use.

Al-Monitor approached the US Embassy for a comment about the criticism leveled at the study by the Israeli Ministry of Education, but no comment was received by the time of publication.

Akiva Eldar is a contributing writer for Al-Monitor’s Israel Pulse. He was formerly a senior columnist and editorial writer for Ha'aretz and also served as the Hebrew daily’s US bureau chief and diplomatic correspondent.