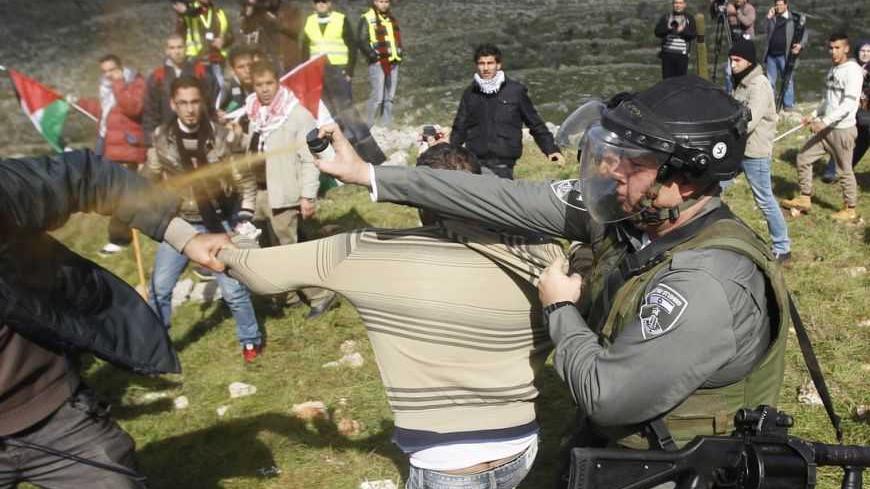 An Israeli border police officer uses pepper spray to disperse Palestinian activists after the group set up tents and makeshift structures in protest against a nearby Jewish settlement in the West Bank, Feb. 2, 2013. - REUTERS/Mohamad Torokman

Last summer I was invited to testify before an independent fact-finding mission commissioned by the United Nations’ Human Rights Council. According to the invitation that landed in my mail box, the committee was supposed to investigate “the implications of Israeli construction in the settlements on the rights of the Palestinians in the occupied territories.” After a brief hesitation, I decided to reject the invitation. Everything I know about the settlements and their implication for both peoples has been published in dozens of articles I have written on the subject for more than 30 years and in the book Lords of the Land which I wrote with historian Idith Zertal.

The job of journalists and writers is to share their knowledge with the broad public. They have a right not to cooperate with investigative committees. Governments, on the other hand, and especially governments which proudly bear the adjectives “democratic”, “enlightened”, “moral” and more, are best served by cooperating with every internationally recognized organization. This is true, too, of the U.N. Human Rights Council, whose degree of objectivity on all that concerns Israel is doubtful (until a few years ago it was headed by a Libyan representative). Nonetheless, Israel cannot afford to boycott a central, international organization of the U.N. But often, against their own interests, recent Israeli governments have adopted the habit of boycotting bodies they do not like. It seems Israel is trying to delegitimize the whole world. Israel is isolated? No way. The world is isolated!

The Israeli government’s reaction to the committee report, published at the end of last week [Jan. 29], along with its reaction to the appointment of the committee last March, reminds me of an ostrich kicking in all directions. In a similar fashion, the foreign ministry buried its head in the sand and exempted itself from dealing with the issue, contenting itself by saying that “the Human Rights Council has sadly distinguished itself by its systematically one-sided and biased approach towards Israel.”

This expected reaction was in keeping with the decision by the foreign ministry’s directorate to punish the Council for commissioning the report. It adopted the proposal by [former Foreign Minister] Avigdor Liberman to cut off all ties with the Council and its leader, Human Rights Commissioner Navi Pillay. The ministry prevented panel members from visiting Israel and even instructed Israel’s embassy to the U.N. organizations in Geneva “not to answer phone calls” from council officials.

Thus, instead of dealing with the content of the report and pointing out its weaknesses (and there are such, see below), Israel’s government preferred imposing a boycott on the U.N. committee.

It seems the government has not learned a thing, nor forgotten a thing, from the affair surrounding the investigation by Judge Richard Goldstone of the events of Operation Cast Lead [mounted by Israel in Gaza in the winter of 2008-09]. Today is it abundantly clear that if the government had cooperated with the fact-finding committee, it would have saved itself much of the widespread damage it incurred from the report. In the famous article he published at the time in The Washington Post [April 2011], Goldstone wrote: “We made our recommendations based on the record before us, which unfortunately did not include any evidence provided by the Israeli government.”

It appears that Israel’s recurring refusal to cooperate is not only directed against U.N. organizations. Over the weekend it was reported here that the ministry of education boycotted a study of Palestinian and Israeli textbooks funded by the U.S. State Department. The ministry tarred the three senior researchers who conducted the study with the brush of “bias” and “unprofessionalism,” noting in its response to Al-Monitor that “the ministry is ignoring the conclusions of the report”.

It would appear that internal criticism is not legitimate, either, as proven by the “diplomatic incident” between Israel and its ambassadors against the backdrop of the timing of the announcement regarding Israel’s settlement policy.

The problematic reputation of the Human Rights Council seems to make it easier for politicians and pundits to malign it. Its agenda and the extent of protection of human rights in a considerable number of the countries represented on the council are undoubtedly worthy of criticism (although, contrary to Prime Minister Benjamin Netanyahu’s claim that more than a third of the Council’s decisions relate to Israel, an Israeli blogger found that the real figure is less than 7%). From this to a boycott of the council, is a stretch. And what is more serious: Israel is disregarding a specific request by the U.S. administration, not to boycott the council. The U.S. ambassador to the council, Eileen Donahoe, said: “We don’t wish to see any harm to this mechanism.” An Amnesty representative in Geneva, Peter Splinter, warned that the precedent of the Israeli boycott “will ruin an important global human rights process for everybody.”

It would be advisable for Bibi to read the article by my colleague Daoud Kuttab on Al-Monitor’s Palestine Pulse. Kuttab contends that the committee report could serve as an important tool in negotiations in the hands of those wishing to end the Israeli-Palestinian conflict and 46 years of Israeli occupation of the territories.

But has the diplomatic level in Jerusalem ever conducted a fundamental debate on the policy of boycotting international bodies? Is it worthy of a government fighting against the boycott of settlements to boycott an international committee wishing to investigate these settlements? Has anyone asked themselves what would have happened had Israel decided to appear before the committee? True, one can assume that had Israel recognized the committee it would have had, inter alia, to explain the contradiction between the commitment of the Israeli government in April 2003 to completely freeze all construction in the settlements (in accordance with the recommendations of the Mitchell Commission and the “Road Map”) and the words of Treasury Minister Yuval Steinitz who boasted of having doubled settlement budgets “while keeping a low profile.”

On the other hand, if the foreign ministry’s legal counsel had invited the panel members to his office, he could have presented them with Israel’s interpretation of U.N. Resolution 242, according to which Israel is not required to return to the 1967 borders, but rather to secure and recognizable borders. If Defense Minister Ehud Barak (or former Prime Minister Ehud Olmert or former Foreign Minister Tzipi Livni) had decided to meet with the committee, they would have undoubtedly told its representatives about the understandings in principle that they had reached with the Palestinian leadership regarding land exchanges. One can assume that after hearing the evidence of these officials, the committee would not have demanded categorically that Israel vacate “all” 520,000 Jewish residents living across the Green Line, without exception, including the 40,000 residents of Modi’in Elit [a town] adjacent to the 1967 borders and the 200,000 residents of the Jewish neighborhoods of East Jerusalem.

And most importantly, if Prime Minister Benjamin Netanyahu had persuaded committee members of his willingness to renew negotiations based on the 1967 borders, the panel would not have recommended that governments and private companies impose sanctions on Israel. It’s still not too late.

Akiva Eldar is a contributing writer for Al-Monitor’s Israel Pulse. He was formerly a senior columnist and editorial writer for Ha'aretz and also served as the Hebrew daily’s U.S. bureau chief and diplomatic correspondent.