Boycotting the UN Human Rights Council over its call to probe into incidents in the Gaza Strip harms Israel’s interests and closes the door on dialogue. 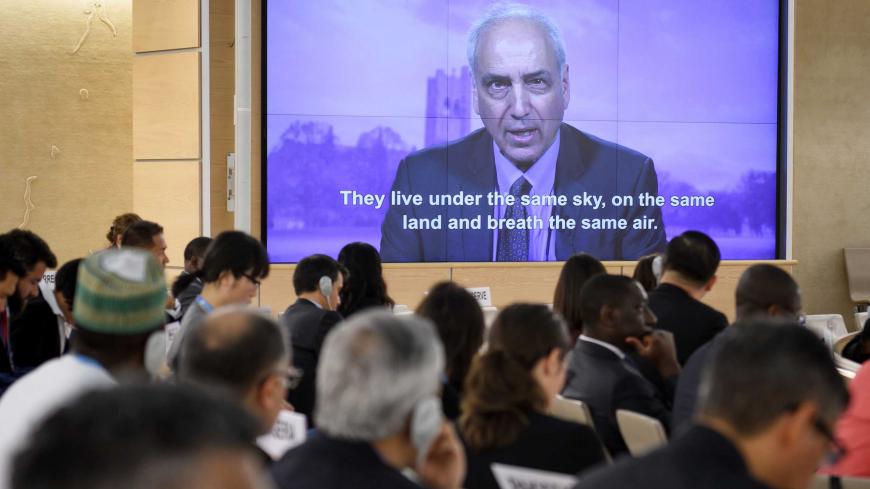 A special session of the UN Human Rights Council to discuss the deteriorating human rights situation in the Palestinian territories hears a video message from UN Special Rapporteur on Palestine, Michael Lynk, in Geneva, Switzerland, May 18, 2018. - FABRICE COFFRINI/AFP/Getty Images

The May 18 decision of the UN Human Rights Council in Geneva to establish a commission of inquiry into the killing of Palestinian protesters in the latest clashes at the Gaza border, especially those on May 14, was met with a Pavlovian response from Jerusalem: Israel will boycott the commission, will not allow its members to visit Israel and will refrain from testifying to it. As in the past, it might make do with submitting an official paper that explains the need to defend its borders, and protect its citizens.

The UN council is a very problematic body as far as Israel is concerned. Its critique over the years has been far from professionally objective, and much closer to hostile. Most of its debates and decisions touch on the Israeli-Palestinian conflict, and its leaning against Israel is evident, as is the fact that it overlooks other cases around the world, involving much greater numbers of casualties and cruelty that can’t be denied and can’t be ignored.

But over the years Israel’s use of the right to remain silent has not helped at all, has not strengthened its case and has not raised second thoughts among critics of the Jewish state. When the Jewish South African Judge Richard Goldstone headed a commission of inquiry on behalf of the council in 2009, to investigate the events of Operation Cast Lead in the Gaza Strip, Israel boycotted him and his commission. The report was indeed very critical, but two years later Goldstone published a surprising essay in The Washington Post, where he wrote that if Israel would have cooperated with him, if it had revealed the relevant material to him, which had reached him in the meantime, he would not have accused it of the crimes it was accused of.

Despite all this, Israel sticks to its stance. In 2012, it decided to break any ties to the commission. Shortly afterward Jerusalem changed policy and made every effort to reconnect with the commission, since someone in the government understood that anger can’t guide Israel’s foreign policy and that self-isolation does not punish the state’s rivals or its enemies — only Israel itself.

The United Nations is an organization intended to protect small nations, so that they are not trampled on by the world powers, as occurred in the two world wars that preceded its establishment. But to meet this challenge, every state, small or large, holds the same weight in its vote in the UN General Assembly and its various bodies (except on the Security Council). Most of these states were only established in recent decades. These are among the “nonaligned nations,” and they support anything they see as movements fighting for the freedom of their people, while they see Israel as part of the West, and as a colonial state — not as a state that has gathered persecuted Jews and defends them. The work of persuasion is much more difficult than fleeing, and so the Israeli tendency is not to make an effort, but to boycott and cut itself off.

This week, I returned from one of the least comfortable forums for Israel: the UN Committee on the Exercise of the Inalienable Rights of the Palestinian People. This has been a problematic forum for official Israel over the years, and the Israelis who participate in its discussions are not — usually — official representatives. The meeting May 18 dealt with possible ways to find a path out of the dead end the peace process has reached in recent years. Most speakers were Palestinians, a few were Israelis, along with researchers sympathetic to the Palestinian cause. The setting was the UN building in New York, and in the audience were many ambassadors and statesmen, such as the Indonesian foreign minister, but also a wider audience of students and experts.

What was said on stage was generally careful and diplomatic. It was much more difficult to hear the “questions” from the audience, most of which — as usual — were short speeches. These were, in general, provocative, touching not only on Israel’s refusal to accept Palestinian demands for an agreement, but also the traditional Arab criticism of the very creation of Israel, the right of the Zionist movement to exist and other such arguments that have been repeated for decades, and which give Israelis goosebumps every time they hear them.

This was an opportunity to explain to the young people in the hall the Israeli position, the logic of Zionism and the goal of those who strive for peace in Israel to reach an agreement with the Palestinian people — first of all for selfish reasons, from the understanding that without a border we can’t ensure a democratic state with a Jewish majority, and without peaceful relations we and our neighbors would live by the sword.

This was not Prime Minister Benjamin Netanyahu’s version of public diplomacy, which concentrates on historical proofs for grave Palestinian conduct and Palestinian refusal, but rather an attempt to explain Israel from its subjective viewpoint, as a home for the Jewish people that would not come at the expense of Palestinians who live in Israel or the occupied territories. After the discussion, a young woman from Gaza approached me and said that if that’s the Israeli position, she is prepared to accept it. She also admitted that she didn’t have the courage to say that before the wider audience.

I don’t wish to deceive myself. Such conversations do not change reality. But boycotting them is an outrageous waste of forums that are interested in hearing our voice, where our voice is not heard now. Seeding doubt among people who are used to a certain kind of propaganda could turn them into our partners in the future, while boycotting does not gain us anything but a release from the unpleasant necessity of challenging people. As for official Israel, it not only has to explain but also to listen. Some of the insights voiced at such forums, like some of the questions of the commission of inquiry, are worth hearing, dealing with and drawing conclusions from.

This policy of burying one’s head in the sand has large implications, beyond the question whether an Israeli presence at UN debates could change international resolutions or the outcome of different inquiry committees. This introverted approach and resorting again and again to a group of supporting countries, which are hardly Israel’s first choice of allies or role models, affects Israel’s new generation of diplomats. These young diplomats become persuaded that the whole world is against Israel, and therefore dialogue will lead nowhere. And so they are led to prefer not coping with the situation, dropping all attempts at convincing others and any attempts of understanding the positions of others. The isolation price that Israel might pay for such mindset could become very costly.

Boycotting the commission of inquiry of the Human Rights Council is very convenient for officials in Israel, and staves off, for the short term, a big headache. But in the long run it damages the national interest. Inviting the commission to Israel, meeting with its members and presenting Israel’s detailed positions could prevent an extreme report. A boycott invites such a report, which would add to continuing damage to the image of the state, even when it doesn’t deserve it.