Pnina Sharvit-Baruch, the former head of the IDF’s Department of International Law, tells Al-Monitor in an interview that though the UN report on the Gaza war was fairly impartial, it cannot be used as the basis for a criminal indictment. 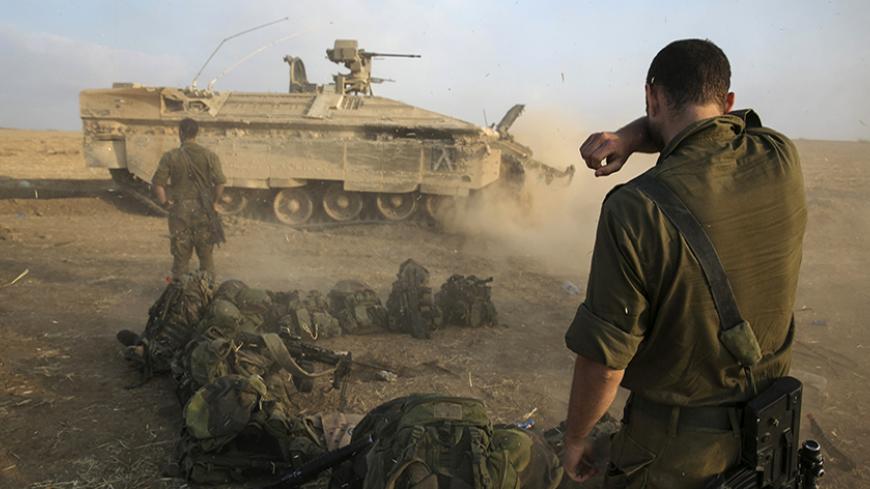 An Israeli soldier stands at a staging area after crossing back into Israel from the Gaza Strip, July 28, 2014. - REUTERS/Baz Ratner

Just hours after the United Nations Human Rights Council released its findings June 22, attorney Col. (Res.) Pnina Sharvit-Baruch offered Al-Monitor this assessment: “In terms of a criminal indictment, Israel has no reason to worry about the International Criminal Court in The Hague. The UNHRC report on Operation Protective Edge didn’t investigate the events on a criminal level, so it cannot be used as evidence. Furthermore, Israel can provide its own explanations for any claims that it presents.”

Israel had been preparing itself for the release of the report for the past few days. As was expected, the report was met with harsh criticism from the right. Prime Minister Benjamin Netanyahu called for the UN Commission of Inquiry’s findings to be ignored, since the report it produced was “biased.” The chairman of HaBayit HaYehudi, Education Minister Naftali Bennett, claimed that the report had “blood on its hands.” The attacks on the report were not limited to the right. Tzipi Livni and Yair Lapid, former ministers who were members of the security Cabinet during the conflict in the south, spoke out against the UN commission’s comparison of the Israel Defense Forces (IDF) to the Hamas terrorist organization. Lapid went so far as to accuse the commission of hypocrisy, stating cynically, “We will not risk the lives of Israeli soldiers and civilians for the sake of three lawyers from the United Nations. … In the end, they accuse us of knowing how to prevent Israeli soldiers from dying, so we are not prepared to die just to please some lawyer sitting in the United Nations."

However, most experts and other commentators disagreed with the politicians. They claimed that the report is relatively balanced, especially when compared with the Goldstone Report, written by a similar UN commission in 2009, in the wake of Operation Cast Lead in the Gaza Strip.

Despite the sigh of relief from many about the the report being relatively balanced, Israel still rejects it. Israel claims that the report was born in sin because you cannot compare Israel to Hamas, which is a murderous terror organization.

Sharvit-Baruch is now a senior researcher at the Institute for National Security Studies. In the past, she was head of the IDF’s Department of International Law. She served in that position during Operation Cast Lead and was in charge of all legal counsel pertaining to international and administrative law. In this capacity, she advised senior IDF and government figures on issues such as the laws pertaining to combat, occupation and fighting terrorism. After the release of the Goldstone Report, she came under fire from leftist organizations for her role in Operation Cast Lead, as that report accused Israel of war crimes and military assaults on civilians.

The text of her interview with Al-Monitor follows:

Al-Monitor:  Do you share the assessment that the current report is tempered and balanced, especially when compared with the Goldstone Report?

Sharvit-Baruch:  The general impression is that the members of the commission tried to be balanced. In my opinion, if William Schabas [who resigned over claims that he had ties to the Palestinian Authority] had remained the chairman of the commission, the situation would be dramatically different. He had a very clear anti-Israel agenda. I am under the impression that the report was written very cautiously, and that the materials that it contains cannot be used to prepare a criminal indictment. The report lacks the decisiveness of the Goldstone Report. The commission describes the chain of events, while leaving the question of who is to blame open. The term “war crimes” is used, but in general, the accusations are couched in very cautious terms. The impression that this is a relatively balanced report is based on a comparison to the Goldstone Report, which was disturbing in every possible way, as far as Israel was concerned. The Goldstone Report contended that Israel had an explicit intent to harm civilians.

In general, the precedent set by the Goldstone Report created the expectation that this report would be similar, which is why we say that this is really not as bad as we feared. Nevertheless, the report is very critical. While it is true that its criticism also targets Hamas, it is still impossible to ignore its criticism of Israel.

I don’t think that there was an anti-Israel agenda. Nevertheless, the commission received its mandate from the United Nations Human Rights Council, which is clearly an anti-Israeli body. As a result, this is not a positive report, as far as Israel is concerned.

Al-Monitor:  How does the report treat the issue of military targets, as opposed to civilian targets?

Sharvit-Baruch:  While the report provides detailed descriptions of the IDF’s attacks on civilian structures in Gaza, it also points out that in some instances, these were actually attacks on military targets. In six incidents, it did not find evidence of military targets, which means that the burden of proof rests with Israel. Nevertheless, it also notes that Israel cannot reveal its sources to prove that these buildings really were Hamas military targets.

Al-Monitor:  To what extent will the report damage Israel’s image?

Sharvit-Baruch:  Any report that is critical of Israel by claiming that the Israeli government is responsible for attacks against civilians becomes a weapon in the hands of our critics. It is reasonable to assume that they will mine those quotes that are favorable to them, and as already mentioned, there is no shortage of such quotes in the report. For example, the members of the commission insinuate that the highest levels of the Israeli government were responsible for the policies that led to Israeli war crimes, and there are descriptions of firepower being used indiscriminately and disproportionately. This report will find its place in the canon of criticism against Israel. That should come as no surprise.

Sharvit-Baruch:  The report does provide room for explanations of most of the incidents, and even goes so far as to provide some explanations of its own. Some of its criticism should certainly be studied. It is no different from the kind of criticism that any other army in a similar situation might be subjected to. All other armies use artillery. When it comes to the basic rules of warfare that apply to us, the IDF doesn’t act any differently from any other army. I am in contact with the legal counsels of various other militaries. We speak the same language, we are subject to the same rules and we face the same moral dilemmas that derive from conducting operations within a civilian population.

Al-Monitor:  Was Israel mistaken when it refused to cooperate with the commission of inquiry, claiming that the report’s conclusions were known in advance?

Sharvit-Baruch:  I believe that even if there were no formal cooperation, data was transferred in roundabout ways and there were ways to get our position across. All in all, the commission heard from Israelis. The problem is that we are talking about an investigative body that, at its core, is hostile to Israel. In my opinion, the members of the commission were subjected to external pressures, because the conclusions suddenly hint that it is IDF policy to target civilians. In general, the very idea that there is enough perspective during the fighting to change what is happening in the field is problematic. Fighting takes place in a chaotic space and has a dynamic all its own.

Al-Monitor:  As a veteran of Operation Cast Lead and the Goldstone Report, which shocked Israel with its severity, do you think that Israel learned any lessons as far as public diplomacy is concerned? Perhaps its conduct this time around (taking into account the possibility of an inquiry commission in the aftermath) caused the current report to be more balanced?

Sharvit-Baruch:  Certainly. There were some improvements. For example, one of the lessons derived from the Goldstone Report related to documentation. When it came to that, we were very weak during Operation Cast Lead. Now that we have documentation of Hamas firing from hospitals, the entire situation changes, because it is impossible to refute that kind of evidence. That is why I believe that the matter of documentation has improved considerably since Operation Cast Lead, and that the IDF now recognizes how important it is. As for everything to do with the disproportionality of fighting in civilian territory, however, there was no dramatic shift on our part, because the distinction and the precautions we take existed then as well.

Al-Monitor:  How does Israel react to the fact that the report also criticizes Hamas?

Sharvit-Baruch:  To some degree, we are satisfied that they were critical of Hamas as well, because they usually focus on Israel and lay all the guilt on it. In this report, however, they note that Hamas fired over 4,800 rockets and 1,700 mortar rounds at Israel, causing injury and death to Israeli civilians. Then, of course, the commission gave the number of Palestinians who were hurt, including over 700 civilian casualties. Even if the accusations that we engaged in premeditated attacks on civilian targets have no real basis in fact, there is not much we can do about them.

Our efforts to convince anyone that we are the victim are destined for failure. That is frustrating and hard to take. It is very difficult to relay the sense of threat faced by Israelis as a result of being subjected to rocket fire, especially to people who do not really understand what war is like. By the way, from my experiences, when we speak to the Serbs, for instance, they are quick to understand our position. In the end, however, there is nothing to be done about it. A photograph showing a [Palestinian] rocket with a plume of smoke rising to the sky [as it is destroyed by Israel's air defense system] does not have the same impact as photos of children’s bodies.