On the backdrop of Operation Protective Edge, former Shin Bet legal adviser Eli Bahar outlines the legal concepts involved in warfare and the boundaries of permissible IDF actions in Gaza according to international law. 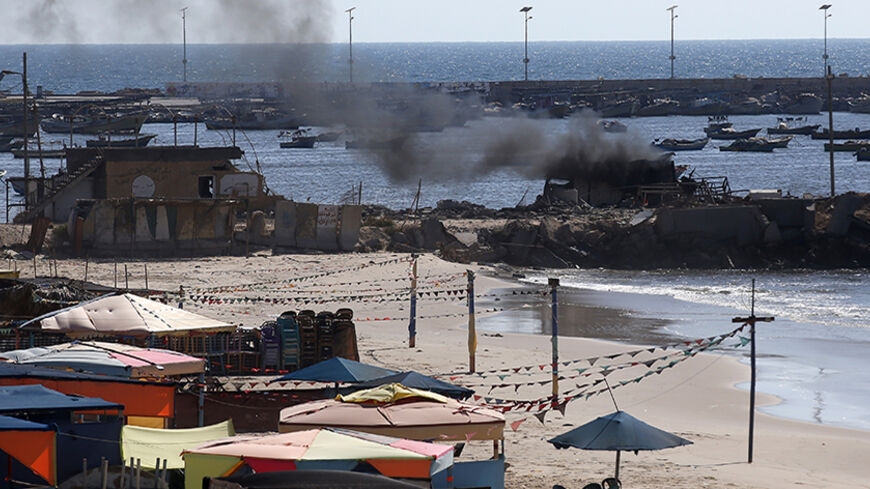 “Even when there is a chance that citizens will be injured as a result of military action, there is no absolute prohibition against taking such action, as long as the target being attacked is a legitimate military target.” This statement, formulated over the last few days in response to Operation Protective Edge, was written by legal experts at the Israel Democracy Institute. The document is signed by institute President Yohanan Plesner, his deputy Mordechai Kremnitzer, Ono Academic College law faculty Dean Amichai Cohen and former Shin Bet legal adviser Eli Bahar.

Their brief reflects the many challenges and complexities faced by Israel as it engages in a conflict in the Gaza Strip, right in the middle of a civilian population. What happened July 16 was a stark reminder of the situation’s complexity. Four children playing soccer were killed on a Gaza beach July 16, apparently by offshore Israel Defense Forces (IDF) fire. The IDF immediately began to investigate the incident, claiming that the area under attack was targeted because militants who had committed acts of terror were also located there. The killing of the children received extensive media coverage worldwide, and is considered by now one of the most significant moments of Operation Protective Edge. Israel has already been accused of committing a war crime and is being asked to explain what exactly happened there.

In diplomatic and security circles alike, it's almost a working assumption that Operation Protective Edge, like other military operations in densely populated Palestinian areas, will end with Israel being accused of massacring a civilian population and committing war crimes. There is precedent for that with what happened during operations Defensive Shield in 2002 and Cast Lead in 2008.

The legal opinion by the Israel Democracy Institute was released just a few hours before the incident on the Gaza beach. Plesner, a former Knesset member for the Kadima Party, explained the brief, saying that in addition to providing security forces with the principles of combat in densely populated areas, it's also intended for consumption outside Israel, and will therefore be distributed in English as well. According to him, there is sometimes a distorted dialogue overseas in matters pertaining to Israel being accused of war crimes and violations of international law.

“Based on the equation that has emerged, every attack on civilians is a war crime,” says Plesner. “We say that democracies have an obligation to defend themselves from terrorism, and that international law allows for an extensive set of tools to cope with terror. If we know how to navigate international rules of engagement, we can prevent a diplomatic war of attrition that could last years, as we witnessed in the wake of the Goldstone Commission after Operation Cast Lead.

With regard to the internal debate within Israel, the authors of the document wish to emphasize that even if the country has a legitimate right to use military force against Hamas, it must do so in accordance with the principles and limitations of international law. “We claim that to achieve our diplomatic objectives, what matters is not only how much force we have but how we use that force in accordance with those international laws, which we are obligated to adhere to as a member of the family of nations.”

The legal opinion of the Israel Democracy Institute deals extensively with the most basic principle of the laws of war: drawing distinctions between targets. According to this principle, it's incumbent on the party launching the attack to distinguish between civilian and military targets. While military targets are legitimate targets, it's absolutely prohibited to direct an attack toward civilian targets. Based on this, the document states, “Any target being used for military purposes may be attacked. … Accordingly, a mosque being used to store weapons is a legitimate target during combat, provided that there is convincing evidence that the mosque is being used for a clear military purpose that is aiding Hamas.”

The legal brief rules, “Targets cannot be destroyed solely to intimidate a civilian population. Homes that are not being used for military purposes cannot be fired upon, and there certainly can be no attacks on homes that belong to the family members of terrorists (who themselves are not present at the time) just to frighten the family members and civilian population.”

Bahar served as the legal adviser of the Shin Bet from 2006 to 2011. In a conversation with Al-Monitor, he explained that the use of legal advisers in this type of combat is essential, and critical to ensuring the successful outcome of the military missions. According to him, jurists help the state to ensure that the rules of international law are being followed in a conflict in a civilian area, to ensure the legitimacy of the operation and provide it with military and diplomatic action space.

The text of the interview with Bahar follows:

Al-Monitor:  The document focuses on the principle of proportionality, saying that “commanders must always take into account the degree of harm to civilians and must ask themselves whether the operation could be executed in a way that would cause less harm and whether the anticipated harm to civilians is justified.” Based on this principle, was the attack on the four children playing soccer on the beach proportional?

Bahar:  First of all, it should be investigated whether whoever fired at them knew that there were children or civilians in the area. If he had no way of knowing that, then it was a mistake. In other words, he did not really take into consideration whether it was proportional to kill four children in order to achieve the military objective.

The basic principle is that it is necessary to distinguish between civilians and combatants in order to avoid excessively disproportional damage and to achieve the military objective. In circumstances where there are many civilians at the site of a legitimate military target, the relevant factor is how significant the site is militarily. Does it contain stockpiles of weapons? Is it the site of a missile launcher? Under such circumstances, it is an increasingly legitimate target for attack, even if that would involve harming civilians. Of course, all of that must be proportional too.

Al-Monitor:  How many civilian casualties would be considered proportional in this instance?

Bahar:  There is no answer to that, because the concept itself is so elusive. Sometimes it is only possible to know if it was proportional after the fact. When [co-founder of Hamas' military wing] Salah Shehadeh was assassinated, 14 noncombatants were killed, and it was determined retroactively that this was disproportional. On the other hand, there is no yardstick or legal precedent in either international or Israeli law to define precisely what proportionality is. It is a concept that depends entirely on the nature of the military objective and how important it is to the war effort.

Al-Monitor:  Based on your experience and understanding of the exigencies, to what degree do commanders and combatants have the requisite knowledge and training to make these kinds of decisions?

Bahar:  Because of the inherent complexity of fighting terrorism within a civilian population, we have an increased obligation to respect the civilians we encounter on the enemy’s side. The laws of warfare are a component of the professionalism demanded of a military officer and part of his training.

I can say that there is a high level of general awareness among decision-makers that international law is a relevant factor in the legitimacy of the operation, and that this impacts the way the state acts. It is the only way we can maintain our international legitimacy.

In my opinion, it is incumbent on the attorney general, in his capacity as the most senior figure in the legal system, to publicly delineate the rules of what is permissible and what is forbidden while this fighting continues. It is essential that there be a legal and ethical statement declaring that the rules and principles of international law be upheld when achieving military objectives.

Al-Monitor:  What you are essentially saying in your legal ruling is that the killing of civilians isn’t always a war crime.

Bahar:  That’s right. There can be complications resulting from a justifiable military operation that was proportional in terms of military exigencies. As bad as it sounds, harming civilians is permissible.