Just as he did after the attacks in Paris, Prime Minister Benjamin Netanyahu and his colleagues on the Israeli right are keen to point out connections between the terrorism striking Europe and Israel's domestic security issues. 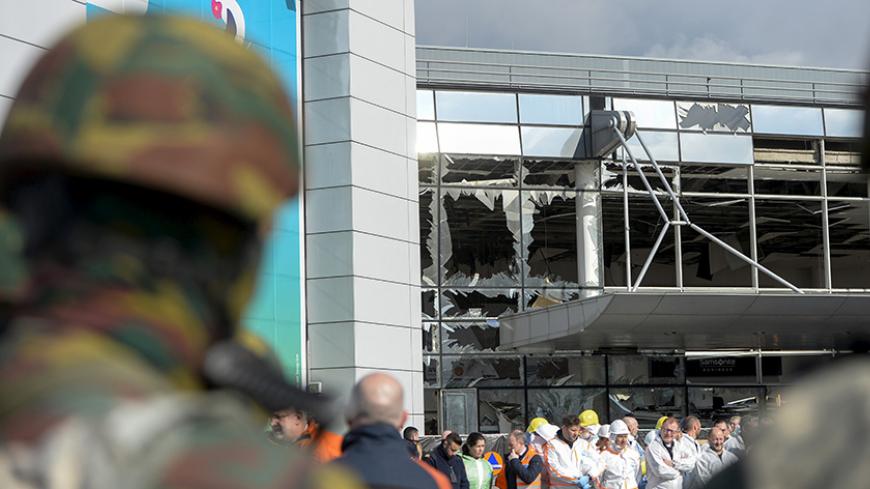 Windows of the terminal at Brussels national airport are seen broken during a ceremony following bomb attacks in the Brussels metro and Belgium's Zaventem airport, March 23, 2016. - REUTERS/Frederic Sierakowski

The response of Israel’s Intelligence Minister Yisrael Katz just one day after the attacks in Belgium was such an uncomfortable mishmash of schadenfreude, condescension and rudeness that it was easy to imagine someone had distorted what he actually said.

“If Belgians continue eating chocolate and enjoying life and looking like great democrats and liberals, and not noticing that some of the Muslims there are planning terrorism, they won’t be able to fight them,” said the senior minister in a radio interview the day after the attacks. Adopting a somewhat reproachful tone, he seemed to be admonishing the Europeans for their lax policies in confronting international terrorism, compared with Israel's.

Katz’s comments encapsulated the patronizing attitude toward Belgians coming from the Israeli political right immediately after the attacks, especially on social networks. Comments and the overall mood recalled the gloating arrogance expressed toward the French following the brutal terrorist attack in Paris in November.

Using Facebook as his platform, Katz’s Likud colleague Minister of Science Ofir Akunis released an especially reproachful and condescending post about the Europeans. “Let me repeat myself,” the minister wrote. “Many in Europe preferred to focus on the vile condemnation of Israel, on marking Israeli products and on boycotts. At the same time, thousands of terrorist cells affiliated with radical Islam sprung up, right under the noses of the people living on the Continent. Some mocked those who warned them about this. Others ridiculed them. Unfortunately, reality struck full force, cutting short the lives of dozens of innocent people.” According to Akunis, Europeans were so obsessed with the Israeli occupation that they failed to notice the monster that is Islamist terror growing right under their noses.

Whenever terror strikes mercilessly in Europe, the entire spectrum of the Israeli right raises its head. It misses no opportunities to boast about having chosen the right path. The consequences are extremist rhetoric and domination of the country’s security and even its nationalist dialogue. When enlightened Europe closed its eyes and provided immigrants with a home and a relatively easy life, they paid it back with terror. This chorus of “we told you so” is conducted by none other than Prime Minister Benjamin Netanyahu. He sets the tone and sends out his list of talking points. There is no one like Mr. Terrorism himself to explain to the world, “Our way is the right way.”

Obviously, the prime minister’s propaganda machine didn’t pass up this opportunity to strike out with his message. Netanyahu delivered it in a recorded speech broadcast to the American Israel Public Affairs Committee convention on the day of the attacks, and he expanded on it the next day, when he called a press conference in Jerusalem. “If there is any nation in the world that knows what they are going through, it is the people of Israel, who have been standing boldly and bravely in the face of terrorist attacks for many years now,” he said. “I offered them everything that Israel could do to help them in their fight against terrorism, including intelligence and security aid.” When Netanyahu was asked to explain why he has been unable to rein in the current Palestinian uprising, he explained that his government had made many achievements on that front, and then immediately changed the topic to the international war on terror.

Even more than Netanyahu is addressing the world, he is addressing the Israeli public. It is his way to achieve two important objectives: to relieve himself of some of the pressure due to Palestinian terrorism, and to explain why there is no partner in negotiations. Netanyahu also believes that as soon as all this clicks in Europe, no one in the international community will have the patience to hear about the Palestinian-Israeli conflict.

Just as he did after the attacks in Paris, Netanyahu wants to send the message that the terrorism striking at Israeli civilians is the same Islamic terrorism that is attacking Europeans. “This is the common war being fought by the Sons of Light against the Sons of Darkness,” Netanyahu declared, in an effort to remove the occupation from the equation. Then, as Mr. International Terrorism, he offers the world his experience and assistance.

But it is not just Netanyahu. Yesh Atid Chairman Yair Lapid chose to use similar rhetoric. He also addressed first and foremost the Israeli public, which arguably is going through a process of radicalization. The terrorist attacks in Belgium caught Lapid just as he was returning from a demonstration in front of the UN Human Rights Commission in Geneva, a group he called “the Terrorist Rights Commission.” Lapid’s comments were directed to the soft underbelly of the Israeli right, which he is trying to attract. Upon arriving in Israel, he wrote a Facebook post explaining, “The war against terrorism is a global war, and it should be waged globally. … All attempts by Western nations to keep it in the Middle East are destined to fail. [Terrorism] is lethal. It is spreading around the world. Its main goal is to shock, to interfere with life and to attack people's sense of security. And it has another objective: to harm Israel.” For Lapid, too, there is no time for talk about the occupation or a two-state solution when fighting global terrorism.