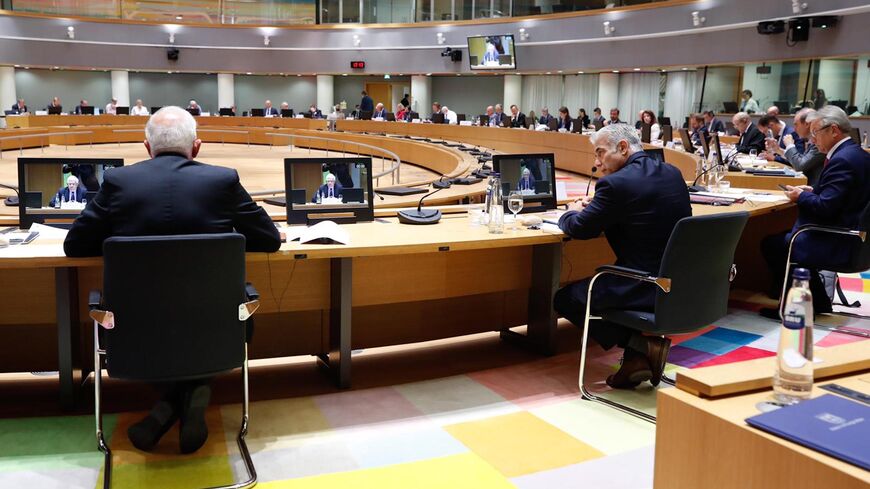 Borrell had extended Lapid the invitation to participate at the July 12 monthly Foreign Affairs Council shortly after the Israeli minister took office. On June 14, Borrell called Lapid, tweeting afterward, "Spoke to Yair Lapid to warmly congratulate him for his appointment as new alternate prime minister and foreign minister. Discussed the importance of strengthening the bilateral partnership and promoting security and peace in the region. Looking forward to working together and welcoming you soon in Brussels." Since then, diplomats in Brussels and Jerusalem have been busy setting up a visit, the first time in over a decade for an Israeli foreign minister to participate in this forum. The last Israeli foreign minister to address their European counterparts in this forum was Tzipi Livn in in 2008.

He wrote, "I addressed today at the official Foreign Affairs Council event 27 EU foreign ministers. It has been far too long since an Israeli minister attended this event. Now there is a new government, a new energy. It is time for a new beginning. I want to base our relationship on something that is not usually talked about in international diplomacy: Optimism. Optimism is a political force."

Lapid’s own optimism and energy were visible from the moment he set foot on Belgian soil. Shortly upon arrival to Brussels yesterday afternoon, he met with his Egyptian counterpart Sameh Shoukry. The two ministers met for an hour, discussing Israel-Palestinian relations and a variety of other security and diplomatic issues. They explored possibilities for a mechanism to rehabilitate the Gaza Strip following the May conflict between Israel and Hamas and means of cooperation against terrorism in the region. Lapid also brought up the Israeli civilians and the bodies of two IDF soldiers held by Hamas.

After his meeting with Shoukty, Lapid met with Borrell, his host. After the meeting Lapid tweeted, "We spoke about the importance of relations between Israel and the European Union, especially the economic aspect." Lapid also thanked Borrell for inviting him.

This morning was as busy as yesterday. Before the main event, the council-wide meeting, Lapid started with a private meeting with NATO Secretary-General Jens Stoltenberg and continued with a series of bilateral meetings with European ministers, first with German Foreign Minister Heiko Mass, then with his French counterpart Jean-Yves Le Drian and last with Holland's Sigrid Kaag.

Israeli diplomats told Al-Monitor that this morning’s meeting with Le Drian was especially important for Lapid. If Israel is to rehabilitate its relations with the European Union, France will be a key element. Lapid’s tweet after the meeting read, "France is an old friend of Israel and we want to strengthen and deepen the alliance between our two countries. We also spoke about the importance of the European Union and Israel’s willingness to conduct a fruitful dialogue with the Union in all aspects."

France is crucial to Israel not just in the overall goal of rehabilitating ties with Europe, but also on specific points on which Lapid wants to make rapid advancements. One is Jerusalem’s desire to join the EU's Creative Europe program for supporting culture heritage initiatives. Much like other programs of the European Union that are open to outside associates, Creative Europe forbids any support of Israeli initiatives in the West Bank, east Jerusalem and the Golan Heights as means of protest against Israel’s occupation and settlement policies.

In 2017, then-Culture Minister Miri Regev withdrew Israel’s request to join the program over the exclusion. This could change now. Lapid’s associates hope the government will adopt a 2013 model supported at the time by current Prime Minister Naftali Bennett. In order to join the European 2020 Horizon program for scientific cooperation, Israel had added a note to the agreement, clarifying that its participation did not reflect any change in its policy on settlements. Paris may now be willing to support such a compromise for Jerusalem to join the Creative Europe program.

Israel’s relations with the European Union in general and the European Commission in particular deteriorated under the leadership of former Prime Minister Benjamin Netanyahu. The premier did not hide his distrust of the European partners, attacking its leadership over its criticism of the Israeli settlement policy and over the European approach to the Iran file.

Last November, Netanyahu scolded the European Union for allegedly failing to grasp the historic dimensions of the Abraham Accords signed with Bahrain and the United Arab Emirates. “We’re in a period of peace. We’ve made peace and normalization agreements with three Arab countries in six weeks. So obviously they have a different view of the situation here in the Middle East than some of the traditional bureaucracies of the EU,” he said. Netanyahu preferred to establish an alliance with nationalist, Eurosceptic leaders such as Hungary's Victor Orban over nurturing ties with the European Commission and with leading member states within the European Union.

Working within the last Netanyahu government, former Foreign Minister Gabi Ashkenazi tried to repair ties between Jerusalem and Brussels. His efforts were hailed by his European counterparts, but with Netanyahu at the helm, there were limits to what Ashkenazi could do.

Lapid is not so constrained. Still, even without the shadow of Netanyahu, Lapid has other limits to deal with, as was evident in his words today in Brussels. “It is no secret that I support a two-state solution. Unfortunately, there is no current plan for this. However, there is one thing we all need to remember. If there is eventually a Palestinian state, it must be a peace-loving democracy. We cannot be asked to take part in the building of another threat to our lives. What we need to do now is make sure that no steps are taken that will prevent the possibility of peace in the future, and we need to improve the lives of Palestinians. Whatever is humanitarian, I will be for it. Everything that builds the Palestinian economy, I am for it.”