Israel-EU talks to resume for first time in decade

EU foreign ministers agreed today to convene soon a meeting under the EU-Israel Association Council in order to regulate and advance relations between Brussels and Jerusalem. 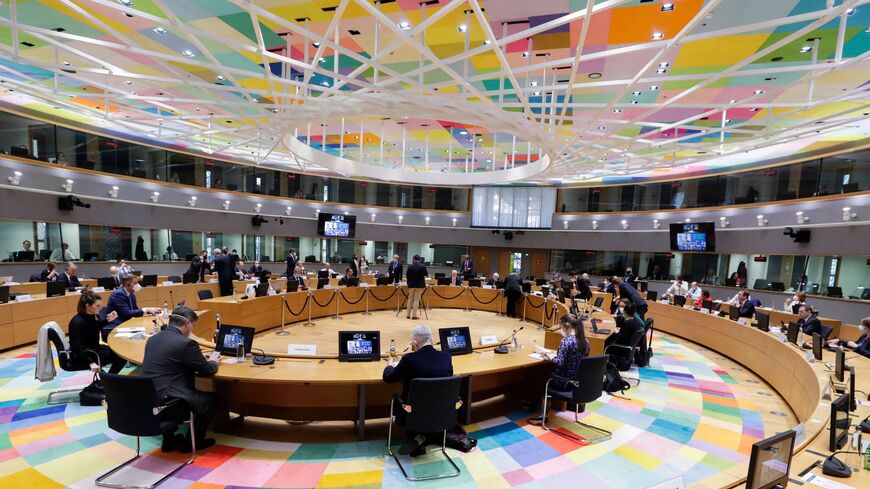 A picture taken on May 18, 2021, in Brussels shows a general view of EU ambassadors with European High Representative of the Union for Foreign Affairs Josep Borrell during a special video conference of European foreign ministers to discuss recent developments in the Middle East, in particular the ongoing Israel-Palestinian fighting. - OLIVIER HOSLET/POOL/AFP via Getty Images

Borrel then emphasized that “the position of the European Union has not changed with respect to the Middle East peace process. We continue with the same Council Conclusion of 2016 supporting the two-state solution. We know that the situation on the ground in the Palestinian territories is deteriorating, and I think — and the ministers agreed — that this Association Council would be a good occasion to engage with Israel about these issues. The date will be agreed mutually with Israel. But first, the European Union member states have to start working and determine a common European Union position, as with any Association Council meeting.”

Israel’s Prime Minister Yair Lapid, who continues to serve also as foreign minister, hailed Borrell’s announcement. A statement issued by his office said, "The fact that the 27 foreign ministers of the European Union unanimously voted in favor of strengthening economic and political ties with Israel is proof of Israel's diplomatic clout and the government's ability to create new opportunities with the international community."

The statement further noted, "The Association Council is the senior political body in charge of promoting all relations between Israel and the European Union, including on the political, economic and technological levels. The convening of the Association Council will enable Israel to continue to develop its relations with the European Union for the welfare of Israeli citizens."

Last July, in his capacity then as foreign minister, Lapid was invited to participate at the monthly EU foreign ministers meeting in Brussels. It was Lapid’s first visit to Europe in his new position, thus sending a clear sign on the policy the new government espoused. Contrary to former Prime Minister Benjamin Netanyahu, who clashed on several occasions with EU leaders, the Bennett-Lapid government sought to heal ties and bring relations with Europe to the next level. While in Brussels, Lapid expressed his hope that the Association Council would soon convene. He then reiterated the same hope last fall.

The current government’s policy of rapprochement with the EU certainly bore fruits even before yesterday’s announcement. Israel’s Ambassador to the EU and to NATO Haim Regev certainly deserves credit for renewing dialogue with European institutions efficiently and constructively.

One example is the October 2021 signing of the EU’s 2021-2027 Horizon program, which offers funding and cooperation on research and development in various domains. Other examples are the visits of senior European officials to Israel after years of very few such visits. European Parliament President Roberta Metsola visited Israel last May and was invited to address the Knesset. European Commission President Ursula von der Leyen visited Israel in the beginning of June and participated later in Cairo at the signature ceremony of a deal to export Israeli gas to Europe through Egypt.

Still, the road to resuming the Association Council meetings was not an easy one. The ball was allegedly in Israel’s court, as Jerusalem objected to the terms the EU wanted to include in the draft for the joint statement for the Association Council. Apparently, Jerusalem objected to references on reopening negotiations with the Palestinians, commitment to the two-state solution and other such formulas. That being said, Israeli diplomats told Al-Monitor a few weeks ago that it was Brussels’ choice of words and terms that was halting the move. They felt that the EU failed to recognize the enormous regional change generated in the Middle East following the Abraham Accords.

On July 12, only one day before the arrival to Israel of US President Joe Biden, nine European countries slammed Jerusalem over an issue that had come up in the headlines last year. The nine countries rejected Israel’s designation in 2021 of six Palestinian organizations as terror groups. They said that despite their demands, Jerusalem failed to present information and proof to back up its claim.

Hours before the publication of the July 18 decision, reports in Israel claimed that Borrell had delayed an earlier attempt to convene the Association Council. According to the reports, European representatives agreed on May 16 on the draft of the joint statement for the Association Council, but Borrell was reluctant of advancing it because of the killing of Palestinian journalist Shireen Abu Akleh. Borrell himself did not visit Israel officially over the past few years.

An Israeli diplomat who spoke with Al-Monitor on condition of anonymity said, "Sure, there are EU members who are on our side, and then those who are more reluctant on rapprochement. But the relations should be inspected and evaluated according to concrete results. The fact is that we signed the Horizon agreement, we signed agreements for cultural cooperation, we increased trade with Europe and now the Association Council will convene. Even the Europeans now realize that the Abraham Accords have created a new reality and new opportunities that they cannot afford to ignore."