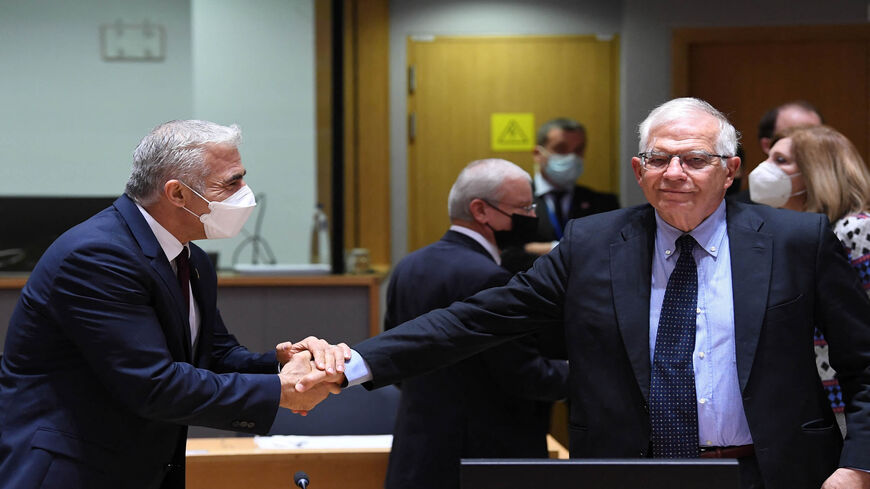 Foreign Ministry Director General Alon Ushpiz arrived July 6 to Rabat on an official visit, extending an invitation on the part of Foreign Minister Yair Lapid for his Moroccan counterpart, Nasser Bourita, to visit Israel. In the written invitation, Lapid reportedly stressed that restoring ties between the two countries was a historical milestone. Still, reports July 14 suggest that Lapid might be visiting Rabat first. Apparently, the Foreign Ministry in Jerusalem is in talks with Morocco to arrange such a trip, making Lapid the first senior Israeli official to visit the kingdom since the two countries decided last year to normalize ties.

A few days earlier, on July 8, Lapid went to Jordan, meeting at the Allenby Bridge with his Jordanian counterpart Ayman Safadi, to seal a historic water deal that should assist the kingdom in coping with the current drought. On June 29, Lapid went to the United Arab Emirates on a two-day visit. On the first day, he inaugurated Israel’s embassy in Abu Dhabi, and on the second, he dedicated the Israeli Consulate in Dubai. Shortly after the visit, Lapid published an op-ed in the Israeli Yedioth Ahronoth newspaper co-signed with his Emirati counterpart, Foreign Affairs and International Cooperation Minister Abdullah bin Zayed Al Nahyan, on peace between the two countries.

A quick look at Lapid’s Twitter account shows the newly appointed minister is determined to either meet in person or talk with every possible counterpart across the globe. In the past few days, Lapid spoke with the foreign ministers of Slovakia, Croatia, Austria, Czech Republic, France, the Netherlands, Germany, Egypt, Russia, Jordan, Morocco, the United States, Cyprus, Canada, Greece, the Emirates and Italy, among others. He also spoke on the phone with Canadian Prime Minister Justine Trudeau. The only missed rendez-vous was that with Equatorial Guinea Vice President Teodoro Nguema Obiang Mangue on a four-day visit to Israel. Coming back from Brussels, Lapid entered into quarantine, after a member of the Israeli delegation tested positive with the coronavirus, so he couldn't meet him.

Indeed, Israel has now a different leadership. Reports indicate that the US administration and many European heads of state are pleased over the change of guards in Israel. Contrary to taking his time on congratulating Netanyahu for his victory earlier this year, US President Joe Biden was quick to congratulate Bennett. Secretary of State Antony Blinken was also quick to congratulate Lapid. Still, they are also cautious, not forgetting the pro-settler ideology hailed by Bennett ever since entering into politics. In that respect, Lapid’s role vis-a-vis the international community is crucial. More so, with Lapid serving as alternate prime minister, it is not surprising that both men are scheduled to attend together the opening of the autumn United Nations General Assembly.

But Lapid has a joker in his pack. It is newly appointed President Isaac Herzog. Former President Reuven Rivlin was loyal to Netanyahu to the point of trying to repair the diplomatic mistakes and damages caused by the prime minister. A typical example of that was the very successful trip of Rivlin to Belgium in 2016. Considered by many in Europe as the last politically sane voice within the Israeli right-wing camp, as an open-minded person defending the rights of the Israeli-Arab public and liberal values, Rivlin was welcomed in Brussels with open arms. It was the sort of welcome that Netanyahu would never have received had he decided to pay the EU’s leadership a visit.

In this respect, Herzog could certainly turn into a willing and very active partner for Lapid. In fact, the Lapid-Herzog couple could become a winning diplomatic duo. Son of Israel’s sixth president Haim Herzog and an internationally recognized statesman of his own merit, Israel’s 11th president is a much-welcomed guest in the international arena.

A first tangible proof of his "diplomatic value" came July 13, when Turkish President Recep Tayyip Erdogan called Herzog to congratulate him on taking office. The two countries have been at odds for more than a decade, and relations between Erdogan and Netanyahu were especially hostile. A phone call of that level has not taken place in many years. After the 40-minute phone call between Erdogan and Herzog, the offices of both presidents issued almost similar statements, emphasizing the willingness of both countries to rehabilitate and ameliorate bilateral relations in a wide range of domains. Ankara continued capitalizing on that conversation the day after, when the spokesman of Turkey's ruling Justice and Development Party, Omer Celik, said, "A framework emerged after this call under which advances should be made on several issues where improvements can be made, and where steps toward solving problematic areas should be taken."