President Isaac Herzog has been busy these past few days on the Arab and Palestinian fronts, secretly visiting Jordan and speaking on the phone first with Egyptian President Abdel Fattah al-Sisi and then with Palestinian President Mahmoud Abbas. 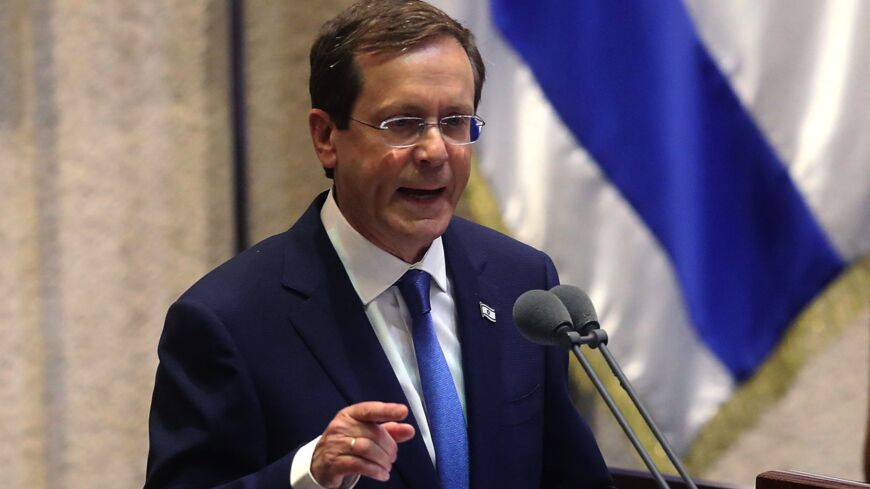 Isaac Herzog, a veteran of Israel's left-wing Labor party, delivers a speech after being sworn in before parliament as the Jewish state's 11th president, replacing Reuven Rivlin, in Jerusalem, on July 7, 2020. - GIL COHEN-MAGEN/AFP via Getty Images

Palestinian President Mahmoud Abbas called President Isaac Herzog on Sept. 6, wishing him a happy Jewish new year and expressing hopes for increased cooperation with Israel. A statement issued by Herzog’s office said the two men “expressed hope that the new year will bring with it more cooperation and dialogue that will bring hope for both peoples.”

One day earlier, Herzog got a phone call from Egyptian President Abdel Fattah al-Sisi. The Egyptian leader called Herzog to congratulate him personally on entering office and extend his wishes to the Israeli people for the Jewish new year and the September holidays. Reportedly, the two leaders discussed bilateral issues and shared Egyptian-Israeli interest, with a mutual agreement to continue being in contact. "I thanked President al-Sisi for his important role pursuing regional stability and peace and we agreed to stay in contact," he tweeted. Sisi had sent Herzog a letter on July 16 to congratulate him on taking office. The Sept. 14 call was the first time they officially spoke.

The two phone calls came shortly after publication in Israeli press over a rare visit by Herzog in Jordan. In fact, on Sept. 4, Herzog revealed he had traveled to Amman for talks with King Abdullah II. Herzog did not give the precise date of his meeting with the king but said he spent a very positive and important evening with him at the royal palace. “Jordan is a very important country. I have immense respect for King Abdullah, a great leader and a highly significant regional actor. In our meeting, among the things we discussed were the core issues in the dialogue between our states. There is a sense in the region of a desire to make progress, a desire to speak,” said Herzog.

In the conversation with the king, Herzog hailed the Abraham Accords for normalization of ties with the Emirates, Bahrain, Morocco and Sudan, stating “these accords created an important regional infrastructure. They are highly important agreements, which are transforming our region and the dialogue within it.” Herzog also said he plans to speak with and meet other heads of state in the region. “I speak with many leaders from all around the world, almost every day, in full coordination with the government of Israel. I think that it is very important for the state of Israel’s strategic and diplomatic interests to engage everyone in dialogue,” he noted.

Indeed, ever since taking office July 7, Herzog has been deeply involved in fostering ties with the Palestinians and with Arab countries. Already on July 11, Herzog spoke on the phone with Abbas, who called to congratulate him on his new post. "I emphasized [to Abbas] that I intend to maintain ongoing contact with him, as have done previous Israeli presidents. This, in the hope of helping to promote relations and peace between the two peoples living side by side," he tweeted.

The Israeli president took advantage of the first formal visit of Foreign Minister Yair Lapid to Rabat to connect with King Mohammed VI. In his meeting with Moroccan Foreign Minister Nasser Bourita, Lapid handed over an invitation by Herzog to the monarch to visit Israel. "Your majesty, I would welcome the opportunity to meet with you in the near future. We are committed to deepening the strength of our relations, and I hope that they further expand and flourish over time," read the letter.

Even more rare and remarkable for Israeli diplomacy was the phone call received by Herzog on July 12 from Turkish President Recep Tayyip Erdogan. "I spoke a few hours ago with President Recep Tayyip Erdogan of Turkey, who called to congratulate me on assuming my position as the president of the state of Israel. We both emphasized that Israeli-Turkish relations are of great importance for security and stability in the Middle East. We agreed on the continuation of a dialogue in order to improve relations between our countries," said Herzog.

The government of Naftali Bennett is composed of right-wing, center and left-wing parties. Bennett had emphasized before his August trip to the United States that his government will not engage in talks with the Palestinians toward a two-state solution, but he also committed not to push forward settlement construction. He himself visited Jordan and met with the king shortly after taking office. According to reports, he is expected to meet soon with Sisi in the Sinai Peninsula resort town Sharm al-Sheikh.

But there is more to it. On Aug. 29, Defense Minister Benny Gantz met in Ramallah with Abbas. After the meeting, Gantz published a series of goodwill gestures designed to assist the Palestinian economy and reinforce the status of Abbas. Bennett’s associates were angry over the gestures. Reports said Bennett agreed to the meeting but not to the extent of the measures announced by Gantz. Still, so far Bennett has not canceled any of these measures.

That being said, it seems that a certain modus operandi on the Palestinians and Arab countries has been formed within the new government. Lapid advances ties with Israel’s Arab partners close by and further away. Gantz advances ties with Ramallah and puts in place measures to better the lives of Gazans. Bennett focuses on Israel’s strategic ties with its neighboring countries and is in charge of keeping the coalition together. To this trio, we can now add Herzog. With his political record of former Labor party head and long-years commitment to the two-state solution, Herzog can do and say things Bennett cannot. At least not as long as he (Bennett) hopes to become the leader of the right-wing camp. The trilateral meeting Sept. 2 of Sisi, Abdullah and Abbas in Cairo makes Herzog’s role even more interesting.