Prime Minister Naftali Bennett said Tuesday that he will not meet with Palestinian President Mahmoud Abbas, but he showed willingness to support economic and business ties with the Palestinian Authority. 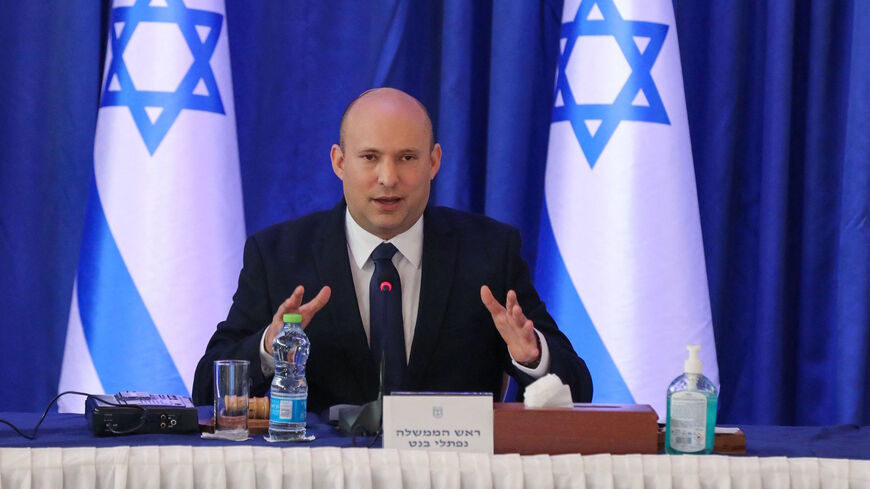 "My perception is different than that of the defense minister, although we work in harmony," Bennett said to Ynet. "I oppose a Palestinian state and I think it would be a grave mistake to import the failed Gaza model of Hamas which shoots rockets at us, and turn the entire West Bank to that. I see no logic in meeting Abbas when he's suing our soldiers in the Hague and accuses our commanders of war crimes. In my opinion, the Palestinian Authority is a failed entity."

Gantz met with Abbas in Ramallah on Aug. 29, and announced a series of trust-building gestures afterward. These included the registration of thousands of West Bank Palestinian businesses for digital payments (ensuring that the Palestinian Authority receives an added 10 million shekels in taxes from those businesses), a half-billion-shekel loan to the Palestinian Authority and more. The meeting was reportedly approved by Bennett, but it is not clear whether the measures offered by Gantz were also approved specifically by the prime minister.

Gantz was not the only senior official to contact Abbas recently. On Sept. 6, Abbas called President Isaac Herzog, wishing him a happy Jewish new year and expressing hopes for increased cooperation with Israel. After the phone call, Herzog issued a statement saying the two men “expressed hope that the new year will bring with it more cooperation and dialogue that will bring hope for both peoples.”

Associates of Bennett did not openly react to the phone call with Herzog, but they did criticize Gantz’s Ramallah meeting and the measures he offered to the Palestinians. Interior Minister Ayelet Shaked said Sept. 14, shortly before Bennett’s interview, that the prime minister was not going to meet Abbas. “Abbas pays money to terrorists who murder Jews," she said. "He sues IDF soldiers and commanders at The Hague and therefore is not a partner.”

Interestingly, in his Ynet interview, Bennett was reluctant to say outright that Abbas was not a partner for possible dialogue or cooperation. ‘’Let’s leave aside definitions. Does anyone think there is a chance for a breakthrough? No one really believes that. I cannot repeat the stances of [President Joe] Biden and [Egyptian President Abdel Fattah al] Sisi. But I am a great believer that actions on the ground, especially in the economic and business domains, could serve as stabilizing elements.’’

The approach of engaging Abbas, or at least allowing some economic relief, has been evident since the establishment of Bennett’s government, though to a lesser degree at the beginning. The first ones to take initiatives for cooperating with West Bank Palestinian authorities were Health Minister Nitzan Horowitz, Environmental Protection Minister Tamar Zandberg and Minister for Regional Cooperation Issawi Freij. The three Meretz ministers have each been holding meetings with senior Palestinian Authority officials for establishing cooperation in different domains, including the coronavirus pandemic.