Israeli Transportation Minister Yisrael Katz is catering to right-wing religious voters by opposing a bill allowing public transportation on Saturdays, ignoring the poor people who depend on such services. 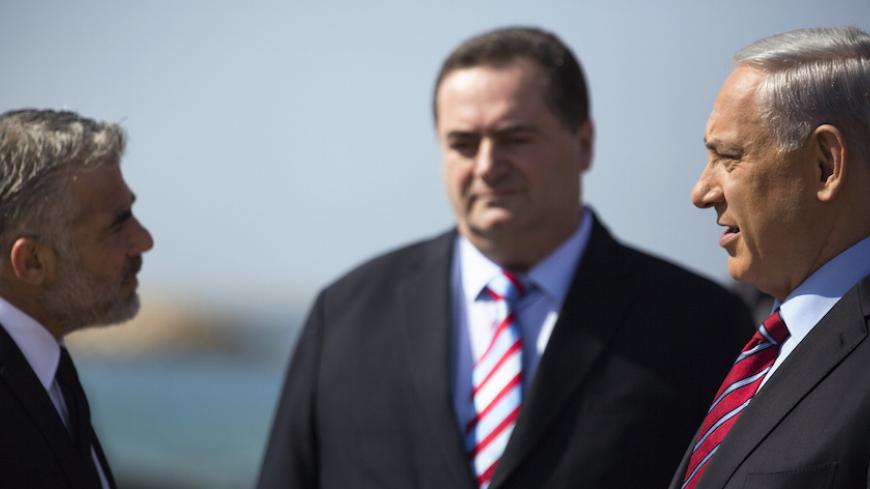 On April 9, the eve of the second holiday of Passover, Minister of Transportation Yisrael Katz shared a short post on his Facebook page: “Without buses, without the handful of protesters, just a hike in HaTeomim River. Happy holiday.” Next to the provocative message was a photo of the minister hiking on a beautiful green trail alongside a religious family.

This post was another move in the public battle that has developed in recent days between Katz and activists promoting public transportation on the Sabbath. It all started when activists posted a demand to change Israel's long-standing policy that forbids public bus companies from operating on Saturday. Katz accused them of being leftists waging a political attack. Since then, the battle on social networks has developed into protests in front of Katz’s house in Moshav Kfar Ahim in the south. On the eve of the holiday, several dozen protesters arrived at his home, among them a Knesset member from the Meretz Party, Tamar Zandberg, who presented a bill to allow public transportation on the Sabbath.

The main argument raised by the protesters is based on social justice. Disadvantaged families who do not own cars, they say, cannot relax and enjoy their leisure time like the rest of the population. There’s also the environmental argument that the use of public transportation is more efficient and environmentally friendly than the use of private cars.

But the moment the fight started, Katz chose to turn the debate into a partisan issue, claiming that the uproar is a campaign by left-wing and public transportation activists. In his view, this protest is the continuation of the political attack on the Likud government before the election as part of the “Anyone but Bibi” campaign against Prime Minister Benjamin Netanyahu.

The crassness from Katz, who is acting like a second-rate political activist, seemed an arrogant response to a legitimate public protest, motivated by the Likud’s big victory in the election. Katz is the one who chose to turn the debate over public transportation on the Sabbath into a political struggle between left and right, secular and religious. The appearance of religious people in the background of the minister's Facebook photo is a wink at the religious sector, which is affiliated with the right and the Likud.

Katz is the minister of transportation for the entire Israeli public, and the manner in which he’s conducting himself in response to the demand for public transportation on the Sabbath is divisive and disrespectful of his position, to say the least. The recent election has shown that the Likud represents a large part of the lower socio-economic class in the periphery of the country, and Katz, as a senior representative of this public and a secular person, should have shown much greater sensitivity to this demand.

Since the social protest, when public discourse changed and politicians from all parties learned the power of the social justice sentiment, Katz has been unreceptive and doesn’t understand the spirit of change. This obstinance is reminiscent of the beginning of the tent protest of 2011, when the Likud accused radical leftist activists of incitement, while it was clear that the protest was universal and that supporters of all parties were participating in it.

When the mayor of Tel Aviv, Ron Huldai, joined the public transportation protest and wrote over the weekend on his Facebook page, “The time has come to care for the have-nots and make the necessary change,” he encapsulated the essence of a demand that crosses political lines. But Katz wasted no time in taunting Huldai as well, once again avoiding a real debate.

In the meantime, the protest started gaining momentum on the social networks, where users called upon ministers to avoid using their official ministerial cars on Saturdays. As those cars are publicly funded, using them could constitute discrimination against the citizens who have no public transportation at their disposal on Saturdays.

Even if the minister of transportation’s claim is correct, and leftist activists are indeed leading the fight for public transportation on Saturdays, that takes nothing away from the justness of the fight. The fact that Katz is resorting to political attacks proves that he understands that he has no substantial arguments in his arsenal. He’s pulling out the status quo according to which all previous Israeli governments have governed, starting from David Ben-Gurion through other left-wing prime ministers like Yitzhak Rabin and Ehud Barak. But this fact cannot be used as a decisive argument in this debate. If in the past such social and cultural issues had been seen by the Israeli public through the prism of the balance between religion and state, today the values of equality, civil rights and social justice stand at the center of such debates.

There are many ways to try to bridge the inequality inherent in the lack of public transportation on Saturdays that clearly disadvantages a certain segment of the population. Even Katz’s religious colleagues in the Likud thought so just a few years ago. Knesset members Yuli Edelstein and Ze'ev Elkin, who are religious, signed individually sponsored bills to allow public transportation on Saturdays and holidays. Minister Gilad Erdan, who also supported such a change, explained that operating public transportation on the Sabbath is meant to address a social need: granting freedom of movement to the underprivileged who do not own their own cars. It’s the secular Katz who takes the severe position and raises the flag of maintaining the status quo, when it’s clear that the Israeli public has moved on and that the fight has a good chance of going the other way this time around.