Young residents of Jerusalem have created a solution to the lack of public transportation in the city on Saturdays by establishing a private cooperative bus system. 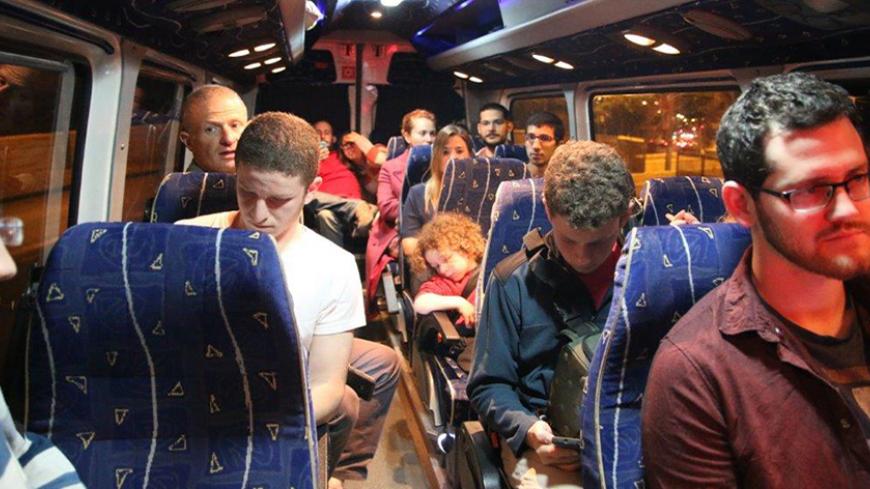 Passengers ride the Shabus bus in Jerusalem on a Saturday in May 2015. - Hovav Yannai/Shabus Project

Every once in a while a stormy and passionate public debate flares in Israel on the issue of public transportation on the Sabbath, the Jewish day of worship and rest. In fact, its status as a day of rest in the Jewish community was recognized even before the establishment of the State of Israel, as stipulated in the 1947 status quo letter sent by Prime Minister-designate David Ben-Gurion to the Jewish Orthodox leadership. The status quo arrangement has not changed much since, notwithstanding the position held by the majority of the public in favor of transportation on the Sabbath.

However, it seems that this time, something is indeed going to change. Social media networks have reshaped the public discourse on this issue, and its impact. This was witnessed, for instance, ahead of Passover in April 2015, when a protest against disabling public transportation on the Sabbath and Jewish holidays swept social media in Israel, and Internet surfers posted a weekend carpool board on the Facebook wall of Transportation Minister Yisrael Katz.

Katz was outraged. And the most effective response to his disdainful dismissal of the initiative was provided by a group of enterprising Jerusalem residents — 12 social activists and idealists mobilized by Laura Wharton, a Jerusalem City Council member on behalf of the Meretz Party. On the evening of May 1, as the Sabbath began, they launched the "Shabus" initiative — a cooperative transportation service enabling its members to move around the city during the Sabbath. The service is operated by a cooperative association, so as to circumvent the Israeli law banning public transportation on the Sabbath and holidays. The group set up a crowdsourcing account on the Israeli Headstart website, and anyone contributing at least 50 Israeli shekels (about $13) was granted a yearlong membership in the association along with his family, including children up to the age of 18. So far, about 111,000 shekels (just over $28,800) has been raised through donations from the association's 500 members.

A Palestinian minibus company based in East Jerusalem has been hired to run the service. "We scheduled the routes, taking into account the assessed needs of passengers [and] modifying the itinerary according to the residential neighborhoods of new members," said Daniel de-Shalit, a student living in Jerusalem who is one of the cooperative's leaders. On the debut evening, dozens of passengers were waiting at stations along the predetermined route. They boarded the minibuses and traveled to various entertainment sites in the city.

As befits an enterprise that made its first steps on the Internet, payment is also technologically advanced. "We approached the operators of an app used in the transportation sector in Israel and abroad, asking to use it to enable payment for the service," de-Shalit said. As yet, it is unclear how much passengers will be charged per trip, as it depends on the number of participants in the initiative. Regardless, the association's founders decided to charge no more than 12 shekels (about $3.10) per ticket.

Another leader of the initiative, Hovav Yannai, rejects the claim that the advanced technology is liable to turn off older passengers. "It will be possible to board the minibuses by presenting a membership card," he said. "It is most important to us to provide a solution for adults and seniors. We hope to eventually launch a shuttle route between the hospitals in Jerusalem, from the Mt. Scopus Hadassah Medical Center, to the Shaare Zedek Medical Center, all the way to the Hadassah Medical Center in Ein Kerem."

In the beginning, the minibuses will run only on Friday nights, from 8 p.m. to midnight, or 2 or 3 a.m. Later, the service will be expanded and run throughout the Sabbath to sundown on Saturday. The activists behind the initiative hope that the service will sooner or later include, on a regular basis, the communities on the outskirts of the Israeli capital, like Mevaseret Zion and Ma'ale Adumim.

At the end of two weekends of activity, the entrepreneurs have come to the conclusion that the minibus should run well into the night to meet the needs of young partygoers. "It enables a significant saving," said Yuval Magira, 17. His father donated 100 shekels (about $26) at the outset, thus winning all his family members an annual subscription. "I still don't have a driver's license, but even when I get one, driving from my Ramot neighborhood to the city center and paying for parking there for an evening out could cost me some 50-60 shekels ($13-$15.60). It would therefore be better to get a ride to the Shabus French Hill station and from there travel to the city." The city of Jerusalem has never before been as accessible to Magira.

"To tell the truth, I was disappointed at first," Yannai said. He took a ride on one of the first Shabus lines operated in the city, and as far as he could see, not many used it. Yet, as it turns out, other lines were more in demand, and close to 200 new members have joined the association since. "We are currently facing two challenges: increasing the number of members in the association and increasing the number of passengers among the association members," Yannai said. "We are well aware that it is a long-term endeavor. At the moment, we have enough money to operate the service for another three months. However, for the project to be financially viable, we need to run about a thousand trips per month. And it isn't a far-fetched goal. We are now working to reach new target audiences, for instance, high school students and soldiers."

The Shabus model has already raised interest across the country. "We have been approached by residents of Rishon LeZion, Tel Aviv, Kfar Saba and Modiin," Yannai said. "Those showing interest in the initiative are for the most part young people seeking advice on the establishment of similar associations in their own cities or towns."

Be that as it may, even if similar cooperatives are set up elsewhere in the country, and even if they adopt the Shabus designation, it seems that the brilliant idea and the credit for the ingenious brand name will forever be associated with Jerusalem. The word Shabus is a play on the Hebrew word Shabbat and the English word bus. At the same time, it is evocative of the Yiddish "Shabes" outcry of the ultra-Orthodox Ashkenazi community against the desecration of the Sabbath. And speaking of the ultra-Orthodox, the latter have actually not publicly expressed any reaction or objection to the initiative, although some of the activists behind Shabus feared such protest. "We chose to run minibuses rather than buses so as not to attract too much attention," the enterprising activists say.

In recent years, as nightlife and secular culture have flourished in Jerusalem, young Jerusalemites have gained a stronger foothold in the city. It started with the "awakening" movement, founded in 2008 by local secular and religious youths seeking to make the city more attractive for young people. The social justice protests of summer 2011 then spread to the capital. According to Yannai, the Shabus venture was established as a result of that movement — a venture that could revolutionize the lives of many of Jerusalem's secular residents.

"The key to a normal life in Jerusalem is the understanding that there are different populations in the city, each with its different needs," Yannai said. "I, for one, don't like the siren sounded throughout the city by the ultra-Orthodox, announcing the beginning of the Sabbath. However, I understand and accept it. I expect others to accept what we are doing. We have no intention to cause agitation."