Tel Aviv's first fleet of minibuses rolled out Friday evening, breaking a longstanding deadlock over whether municipalities can or should operate public transportation on the Sabbath. 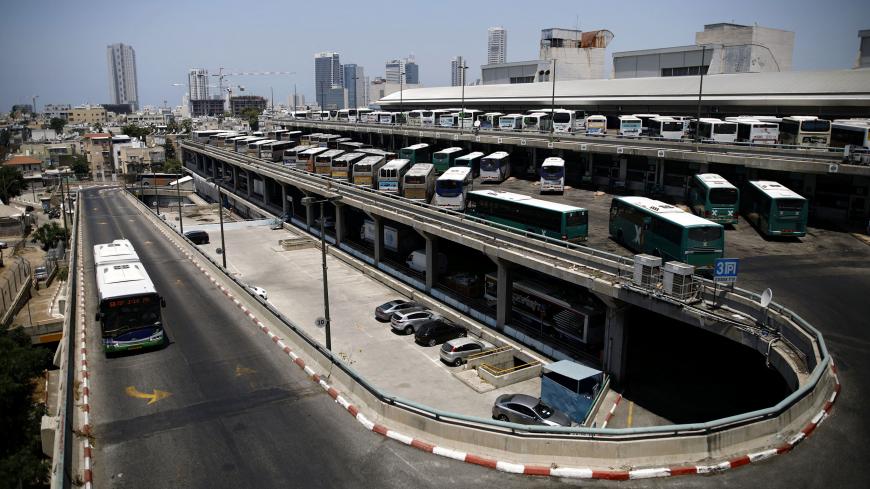 Buses are parked at the Central Bus Station in Tel Aviv, Israel, May 29, 2019. - REUTERS/Corinna Kern

The city of Tel Aviv launched a bus service on the evening of Friday, Nov. 22, that has become a subject of public debate because it operates on the Jewish Sabbath.

“It’s about time,” Tel Aviv Deputy Mayor Metal Lehavi, one of the politicians who spearheaded the initiative, told Al-Monitor.

Traditional Jewish observance of the Sabbath forbids riding in motor vehicles from sundown Friday until sundown on Saturday. Informal agreements between Israel's Orthodox community and the secular majority established before the founding of the state in 1948 outlined that with only a few exceptions such as the cities of Haifa and Eilat, there would be no public transportation on the Sabbath.

But a large portion of Israeli society, particularly in the secular heartland of Tel Aviv, does not observe the Sabbath and has agitated for change to this long-standing status quo. An Israeli Central Bureau of Statistics survey published in 2018 found that 45% of Israeli Jews self-identified as secular. A survey conducted by the Israel Democracy Institute in August found that 60% of Israelis polled supported public transportation on the Sabbath nationwide "except for in areas with a majority religious or ultra-Orthodox population."

For many Israelis without private vehicles who live outside central Tel Aviv, traveling around the country on the Sabbath can be an arduous and expensive task. Much of Israel’s urban planning in recent decades has prioritized automobiles and with public transportation nonexistent on the weekend, those without access to a car are stranded. Those with cars who wish to travel into Tel Aviv on the Sabbath clog the city's already congested and construction-plagued arteries.

Earlier this month, Tel Aviv's city council voted 19-6 in favor of launching a public bus service on the Sabbath with the aim of satisfying broad demand and encouraging residents of neighboring towns to leave their cars at home.

The municipality runs six routes crisscrossing Tel Aviv and three neighboring municipalities in the metropolitan area: Givatayim, Ramat Hasharon and Kiryat Ono. Their routes follow main thoroughfares in an effort to minimize disruptions to the day of rest for those observing. Initially, the 20-seat minibuses will run free of charge every half hour.

Lehavi, Tel Aviv’s deputy mayor in charge of transportation, told Al-Monitor ahead of the launch that the buses would provide the city’s 450,000 inhabitants “freedom of movement” on the weekend and also help combat traffic congestion intensified by the construction of the city’s light rail system.

“It requires us to create solutions for the benefit of our residents so they can really get around. Everyone’s talking about it and knows that easy and accessible transportation needs to run 24/7, otherwise it doesn’t constitute a substitute for a car,” she said.

Tel Aviv Mayor Ron Huldai said it's a "basic right" for people to be able to get around any day of the week. He said he hopes the government "raises the bar and expands this service to all the country's residents."

Israel has been gripped by political deadlock for the past year, with two parliamentary elections failing to form a government. One of the major sticking points preventing a governing coalition is the relationship between the Jewish religion and the state.

Five of Israel's political parties — Blue and White, Yisrael Beitenu, the Joint List of Arab parties, the Democratic Union and Labor-Gesher — support liberal policies such as civil marriage and public transit on the Sabbath. On the other side of the aisle, the Likud, United Torah Judaism, Shas and the United Right oppose these measures, saying they are contrary to the state's Jewish character.

Avigdor Liberman, head of the secular ultranationalist Yisrael Beitenu, has been the kingmaker in this year’s two parliamentary elections. In both instances, he refused to join a governing coalition headed by Prime Minister Benjamin Netanyahu. One of the main sticking points was the issue of public transit on the Sabbath, a concession that would be anathema for Netanyahu’s ultra-Orthodox allies.

The ultra-Orthodox news site B'Hadrei Haredim encapsulated the community's outrage in a headline: "At the expense of city hall: thousands violated the Sabbath."

Meir Porush, Israel's deputy education minister, said in a statement Saturday that it was "painful that local politicians are taking advantage of the national political situation and trampling the Sabbath in the public space, for the sole purpose of public relations at the expense of the Sabbath observant population."

While Tel Aviv aims to increase the bus service to meet burgeoning demand after its first weekend of operation, there are those who would derail the initiative. Speaking to religious lawmakers at a gathering of the Sabbath Protection Lobby at the Knesset earlier this month, Transportation Minister Bezalel Smotrich threatened to take action "to drastically reduce the change to the status quo" governing public transportation on the Sabbath.

City Hall, however, is undeterred.

Lehavi said, “Our aim is to let the public freely enjoy their weekend in a way that respects the Sabbath and allows a broad population make use of the weekend, each according to their lifestyle.”