Why Israel's ultra-Orthodox are not happy with proposed Sabbath law

This time, secular Israelis are pushing for a Sabbath-observance law while the ultra-Orthodox resist, claiming the legislation falls short of preserving the day's character. 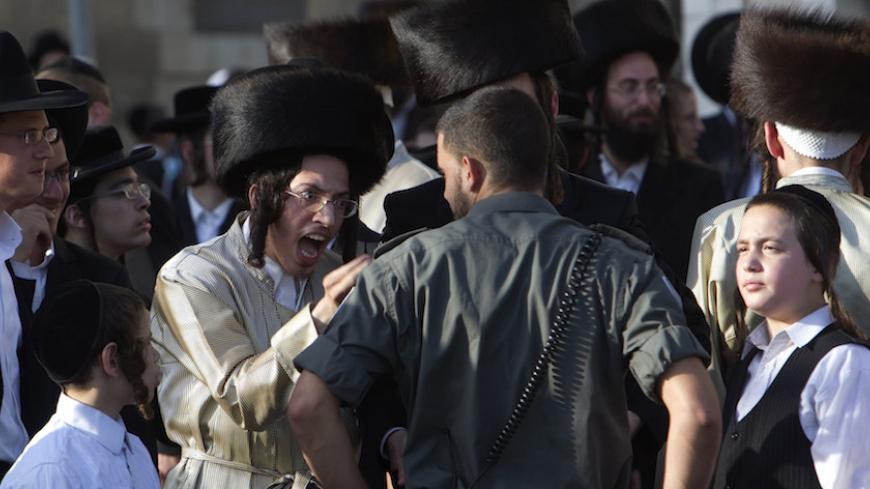 An ultra-Orthodox Jew shouts at a policeman during a protest against the opening of a road on the Sabbath, near a religious neighborhood in Jerusalem, July 30, 2011. - REUTERS/Ronen Zvulun

Over the past few years, battles over the Sabbath have been a source of bitter discord in Israeli society. On one side of the divide are the ultra-Orthodox, who demonstrate frequently against what they claim are violations of the status quo, such as the operation of commercial and cultural centers on the Sabbath. On the other side were local authorities, such as the municipality of Tel Aviv, which encouraged businesses to open on the Sabbath and even operated public transportation on Friday nights and Saturdays. Today, local authorities in Herzliya, Emek Hefer, Arad, Beersheba, Kfar Saba and Ramat HaSharon all operate city-wide public transportation on the Sabbath, while in Jerusalem, residents have established a private initiative to provide people with a public transportation option during those periods.

In December 2015, the Knesset’s Ministerial Committee on Legislation approved a law proposed by Knesset member Miki Zohar (Likud) to ban businesses from opening on the Sabbath, with the exception of restaurants, gas stations and hotels. The law would authorize the minister of economic affairs to grant special permits to businesses to operate on the Sabbath, instead of each local authority regulating what is allowed in its jurisdiction through a series of municipal bylaws. The proposed bill also imposed a significant increase in penalties on businesses that violate the law.

Many Knesset members, including some from the coalition, were so opposed to the bill that Prime Minister Benjamin Netanyahu asked Zohar to write a more moderate version, hoping it would win greater support. The original law was toned down significantly, and is now being advanced by four Knesset members: two from the coalition and two from the opposition. It is worth noting that none of them represents an ultra-Orthodox or other religious party. They are Zohar, Rachel Azaria (Kulanu), Elazar Stern (Yesh Atid) and Manuel Trachtenberg (Zionist Camp).

Quite a few secular Knesset members support the proposed law, including, for example, Dov Khenin, a Jewish member of the Joint List of predominantly Arab parties. He has been quoted in the press as saying, “I consider what has happened to the Sabbath to be a tragedy. The Sabbath is an impressive social achievement. … It is a chance for all of us to pause for a moment in the mad rat race of life.”

The new version of the proposed law would ban businesses, industry and commercial ventures from operating on the Sabbath. However, it would allow commercial centers in industrial zones to begin work in the late Saturday afternoon hours. At the same time, it would allow small grocery stores, restaurants, coffee shops and convenience stores to remain open throughout the Sabbath. The law would even allow limited public transportation to operate on the Sabbath, along with cultural, leisure and entertainment centers. The preamble of the new law reads, “The purpose of this proposed law is to use legislation to formalize the Sabbath as the day of rest in Israel, and in so doing, to strengthen the Sabbath as a unifying factor, bringing Israeli society closer together.”

Polls conducted over the last few years indicate that the Sabbath does have a special place among all sectors of the Jewish population in Israel. A 2013 survey by the Ma’agar Mohot (Brain Trust) Institute found that most of the Israeli public regards the Sabbath as a day of rest. A comprehensive poll conducted in 2009 by the Israeli Institute for Democracy found that 69% of Israelis have a Sabbath meal. However, a survey conducted by the Smith Institute last year found that 74% of the public would like to see public transportation made available on the Sabbath. Another survey, conducted by prominent pollster Mina Tzemach, examined the attitude of Israelis toward the Sabbath Law. It found that 67% of the public wanted shopping centers to be kept open.

Talking to Al-Monitor, the secretary of the Committee for the Sabbath, Rabbi Yitzhak Goldknopf, made it clear that the ultra-Orthodox would use all the power at their disposal to fight the new Sabbath Law. “We will cast a veto and there will be a coalition crisis, which could include us leaving the government,” he warned. “They’re trying to offer us a deal in which we agree to public transportation on the Sabbath, and in exchange, we are 'rewarded' by having businesses closed. But that’s a terrible deal, because we are fighting for the day’s unique character overall. We will never give up the fight to prevent public transportation on the Sabbath."

Goldknopf also expressed suspicion regarding the law's implementation. “We know how it works,” he said. “This law will not be enforced like all the other laws. In the end, there will be public transportation on the Sabbath, and businesses will be open then too.” He added, “If anyone tries to tear down the sensitive status quo, they can expect an extreme response from the other side.”

Zohar is convinced that the ultra-Orthodox parties’ opposition to his bill itself denigrates the status Sabbath in the first place. “The Sabbath doesn’t exist at all in the Israeli public sphere. Everything is open and buzzing with activity, so that we are gradually losing this special day entirely,” he told Al-Monitor. “As a traditional person, I would also prefer to see the Sabbath as a complete day of rest. The ultra-Orthodox are sticking to the status quo, but it only exists on paper. Our proposal eliminates 90% of Sabbath desecration. The remaining 10% happens anyway. I really can’t understand the ultra-Orthodox, as there is no doubt that the new law would lead to less desecration of the Sabbath.”

“The Coalition for Sabbath Equality” is an apolitical group of merchants and social activists established to reduce the amount of business conducted on the Sabbath. This group also supports the Sabbath Law. “Twenty years ago, it was hard to find businesses open on the Sabbath, but today, the status quo has been brutally violated by more and more people of means,” said the group's director, Roi Lachmanovich. “It is understood that the situation has changed, and it is therefore necessary to fix it. The new initiative is welcome since it tries to find the point of connection between all the various communities. Everyone wants a day of rest, but they also want the possibility of going out and doing things in that time."

Over the past few years the dominant impression has been that the desire to preserve the Sabbath in Israel is the exclusive concern of the ultra-Orthodox. However, various polls and cross-party activities in the Knesset and civilian life to ensure that certain businesses remain closed on the Sabbath indicate that secular Jews are also interested in maintaining the Sabbath as a day of rest. It seems as if the Jewish population of Israel, at least most of it, has no interest in forsaking Jewish tradition on a personal level. Where it does have reservations is the degree to which the state involves itself in the Sabbath and tradition's place in their lives.