Israeli city breaks with status quo on the Sabbath

An initiative by the mayor of Tiberias for the municipality to help provide public transportation on the Sabbath has caused the issue of the social status quo to the forefront of public discussion. 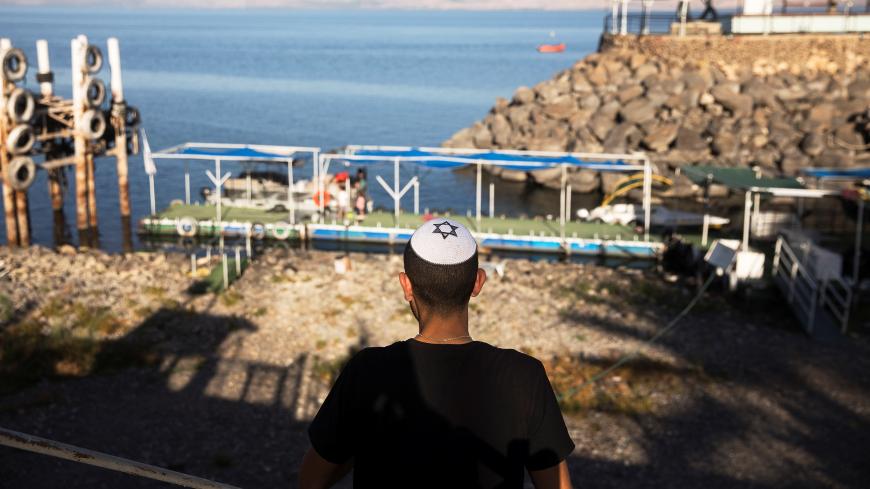 A youth wearing a yarmulke with a Star of David looks toward a temporary pier at the Sea of Galilee, Tiberias, Nov. 1, 2018. - REUTERS/Ronen Zvulun

Many Israelis consider Saturday, Feb. 9, to have been a historic day in matters relating to the status quo on transportation and the national day of rest. On that day in Tiberias — a city considered holy in Jewish tradition and today traditional in its religious leanings — public transportation was provided on the Sabbath by a non-governmental organization working with local authorities.

Most cities in Israel have no public transportation on the Sabbath as Israeli law generally prohibits it, along with the opening of businesses. This is part of the so-called status quo governing state and religion established when Israel was founded. While there have been quite a few civil initiatives providing public transportation on the national day of rest — like Shabbus, private buses traveling between Jerusalem and Tel Aviv, and Noa Tanua, an NGO advocating transport — they had until now operated primarily in regions with a very clear secular majority.

In Tiberias, the bus run by Noa Tanua in cooperation with municipal authorities began operating on Saturdays despite fierce opposition from religious groups in the city. The mayor himself, Ron Kobi, participated in its maiden voyage. He announced that the bus will operate three times a day on Saturdays, connecting the city’s neighborhoods with the promenade along the shore of the Sea of Galilee.

City Councilman David Ohana told Al-Monitor, “What makes this initiative especially infuriating is that it is occurring in a traditional city like Tiberias and without the approval of the City Council or even any debate for that matter.” Ohana represents the ultra-Orthodox Degel HaTorah.

“This is a city where the first restaurant opened on the Sabbath just a few months ago,” Ohana said. “Anyone who walks through the city on the Sabbath will see that there are almost no cars on the streets. This is a city that is very connected to religion. About 70% of the population is traditional. If this were a secular town, it would be none of my business, but this move, which comes cloaked in the guise of freedom and equality, is actually poking the residents of this city right in the eye. It is not liberalism. It is a predatory act, intended to pick a fight.”

Ohana is convinced that the initiative will not last for long. “Apart from a group of political activists, organizers, the press and photographers, only two residents actually got on the bus,” Ohana claimed. “It doesn’t have a chance. Even on weekdays, the buses are empty. Everyone here has a car. This is nothing more than a provocation. Is this the only thing missing in Tiberias? This city needs real work [employment], not cheap populism.’’

While not denying that his group is working to change the status quo, Schwartz-Tichon also asserted, “The status quo no longer really exists. There are places that closed on the Sabbath in the past few decades, whereas they used to be open before that, and vice versa. Today, the direction we go in should be based on mutual agreements, as befits the ‘start-up nation.’ We aim to see these decisions made locally.”

The mayor of Tiberias also has made clear that his struggle is not just for the sake of Tiberias. He wants to shatter the status quo over public transportation on the Sabbath throughout Israel. In an interview with Ynet, he stated, “From Tiberias shall come forth the news that the age of ultra-Orthodox coercion is over in Israel.”

There can be no doubt that in this sense, Schwartz-Tichon and Kobi can take credit for having scored a point. What happened in Tiberias resulted in widespread public discourse among an attentive audience.

Avi Elbaz, a member of the Modi’in City Council and chair of the local party Free Modi’in, announced that he will work to introduce public transportation among the city’s neighborhoods on the Sabbath, while the Tel Aviv Municipality announced that it will independently operate public transportation on Saturdays ahead of the Eurovision Song Contest, which the city will host in May. In addition, Schwartz-Tichon said that because of the extensive media coverage that his campaign has received, several municipalities have already contacted him to look into working with his organization.

Yet, despite all the publicity and the lively discourse, Schwartz-Tichon and his friends might run into a problem: The law forbids carrying passengers for pay without a special license from the Ministry of Transportation. The various initiatives around the country operated by Noa Tanua and Shabbus are only accessible to members of those organizations, who pay 7 to 9 shekels ($2.00-$2.50) per ride. This is why bus rides in Tiberias and possibly other cities will be offered free of charge.

“The free model cannot last for very long,” Schwartz-Tichon explained, “so we will be forced to switch to a model based on municipal funding. We conducted a pilot in Tiberias to examine the feasibility of it. In any event, the final decision will only be made when we know the response to this initiative.”

The clash over the social status quo involving state and religion in Israel is one of the country’s most bitter points of contention. Claims about the ultra-Orthodox and how they are trying to change the status quo would be equally valid if they affected the other side of the divide, which is also working to achieve the same goal of changing the status quo. Everyone can agree that the status quo is constantly being eroded. The real question that needs to be asked is whether the time has come to reformulate the status quo on matters of religion and state and arrive at new agreements.