Israel Says It Can 'Manage' Chaos in Syria

Israeli Defense Minister Moshe Ya'alon predicts fighting in Syria will go on for a long time, but suggests that may not be a problem for Israel. 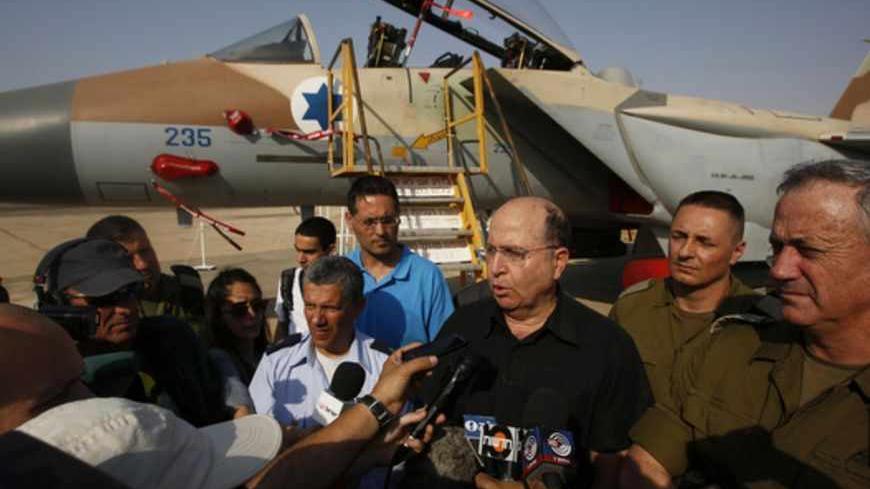 Israel is relatively blasé about the expanding civil war in Syria and sees some benefit in the fact that some of its fiercest adversaries are killing each other and not focusing on Israel, Israeli Defense Minister Moshe "Bogie" Ya'alon said Friday.

The long-time Israeli strategist and former military intelligence chief, speaking a day after the Barack Obama administration revealed that it would be sending weapons directly to the Syrian opposition, said the worst outcome in Syria would be a “chaotic situation, but we can manage it.”

The government of President Bashar al-Assad, backed by Iran and Hezbollah, is battling an opposition that includes Sunni jihadists who also reject Israel’s right to exist. Asked by Al-Monitor if Israel saw the situation in the same way former US secretary of state Henry Kissinger regarded the 1980-88 Iran-Iraq war — commenting famously that “It was a pity that they both couldn’t lose” — Ya'alon gave a Kissingerian shrug. “Might be,” he said, smiling.

Israel’s main concern since the uprising began in Syria more than two years ago is that sophisticated weapons might be transferred to Hezbollah or other groups it regards as enemies, said Patrick Clawson, research director at the Washington Institute for Near East Policy, where Ya'alon spoke on Friday. “Israel doesn’t care” what happens in Syria, Clawson said. “They only care about strategic weapons falling into the hands of adversaries.”

Ya'alon, who is on his first visit to the United States since replacing Ehud Barak as defense minister, said Israel had no intention of intervening or interfering in Syria, but had three “red lines” regarding the conflict there:

“When they cross these red lines, we act,” Ya'alon said.

Israel has carried out air strikes to prevent the transfer of sophisticated weapons by the Assad government to Hezbollah, with which Israel fought a month-long war in 2006. In January, for example, Israel took out a cache of SA-17 surface-to-air missiles stored in the parking lot of a military research center near Damascus. The strike also killed a senior Iranian officer in the Quds force of the Revolutionary Guards, Gen. Hassan Shateri, who had been responsible for reconstruction in Lebanon and a top liaison with Hezbollah.

Israel has also returned fire across the Syrian-Israeli border. Despite such incidents and cases in which UN peacekeepers have been abducted or withdrawn, Ya'alon described the frontier as relatively calm. Indeed he portrayed Israel as the calm eye in a storm of uprisings and transitions that have pitted factions backed by various Arab and Muslim states and groups against each other.

Ya'alon said Syria had become an arena for conflict between old Cold War superpowers — the United States and Russia — as well as Sunnis and Shiites and between Sunni factions including the Muslim Brotherhood, Salafists and al-Qaeda elements. Ya'alon said the Assad government currently controls only about 40% of Syrian territory despite its recent success in wresting the town of Qusair from opposition hands.

“We can’t see any conclusion in the current situation with Assad or without Assad,” he said.

Nearly 100,000 people have died in the Syrian fighting and violence has spread to Lebanon and Turkey, which, along with Jordan, house more than a million Syrian refugees.

Israel’s attitude toward Syria appears to have been a factor in the Obama administration’s reluctance to get more deeply involved in the conflict. Only after the fall of Qusair did the United States confirm that the Assad regime had resorted on numerous occasions to the use of chemical weapons against the opposition — something Obama declared was a US red line. The White House then announced that the US would provide as-yet unspecified weaponry to the Free Syrian Army.

Asked by Al-Monitor if the United States had discussed with Israel what sort of weapons to give to the opposition and ruled out shoulder-fired anti-aircraft missiles — so-called "manpads" — that could threaten Israel’s freedom of action in Syria, Ya'alon said, “We are not in a position to dictate what to do in Syria, but there are consultations.”

On other issues, Ya'alon:

Ya'alon was also asked about Turkey, where Prime Minister Recep Tayyip Erdogan is dealing with the most serious internal opposition of his 10-year rule. The Israeli official said “we shouldn’t delude ourselves” that Israel and Turkey would go back to what he called a “golden age of strategic relations” while the current leadership remains in power in Ankara.