Israel DM Ya'alon clarifies his comments on US (updated)

Israeli Defense Minister Moshe "Bogie" Ya’alon has called US Secretary of Defense Chuck Hagel and clarified his earlier statement where he described the US as weak; Hagel responded by expressing concern over his remarks. 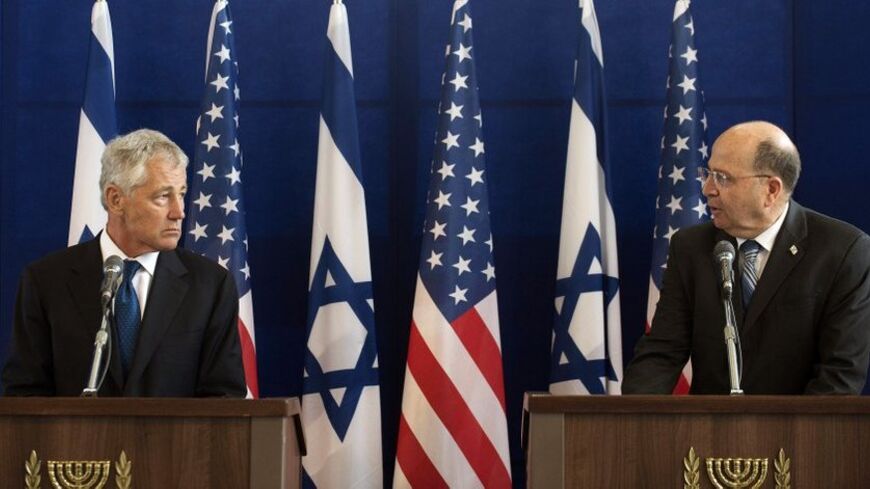 Israeli Defense Minister Moshe "Bogie" Ya’alon called US Defense Secretary Chuck Hagel Wednesday to clarify his remarks that described the US administration as projecting weakness and saying Israel should take matters into its own hands on Iran.

"My statements had no criticism or intent to hurt the US or the relationship with it," Ya’alon told Hagel in the Wednesday night call, Israeli media reported on Twitter late Wednesday. "The strategic ties between Israel and the United States are of high importance, as are personal ties and mutual interests."

Hagel "expressed deep concern about the minister's comments on US policy towards Iran," Pentagon spokesman Rear Adm. John Kirby said in a readout of the call Thursday. "Minister Ya'alon clarified his remarks by underscoring his commitment to the strength of the US-Israel relationship."

The State Department had publicly--and unusually forcefully—denounced Ya’alon’s remarks and demanded an apology.

Ya’alon, speaking at Tel Aviv University Monday, said the United States “shows weakness” on the world stage, and that Israel should not rely on it to deal with Iran, Ha'aretz’s Barak Ravid reported.

“The US at a certain stage began negotiating with [the Iranians], and unfortunately in the Persian bazaar, the Iranians were better,” Ya'alon said, according to Ha'aertz. “We [Israelis] have to look out for ourselves.”

President Obama "has provided an all-time high level of security assistance to Israel…even during times of budget uncertainty, to provide Israel with unprecedented capabilities and options,” Psaki said.

“So it is certainly confusing to us why Defense Minister Ya’alon would continue his pattern of making comments that don’t accurately represent the scope of our close partnership,” Psaki said.

Secretary of State John Kerry called Israeli Prime Minister Benjamin Netanyahu Wednesday “and protested to him his concerns about these comments,” Psaki said.

It's the second time Ya'alon's remarks have provoked US demands for an apology.  In January, Ya'alon reportedly described Kerry's diplomatic efforts on behalf of an Israeli-Palestinian peace agreement as a "messianic obsession."  He subsequently apologized.

Ya'alon, in his call with Hagel Wednesday, "also provided...an update on Israel's security situation and yesterday's operation," against Syrian army positions near the Golan, the Pentagon's Kirby said. Hagel "expressed his sympathy for the wounded Israeli forces and their families, as well as his concern for the ongoing situation in Syria."

The two defense chiefs "pledged to continue working closely with one another on the range of security issues facing the United States and Israel," Kirby said.