In Israel, 'Slip of the Tongue' On Syria Puts Pressure on US

Though a senior Israeli intelligence officer's declaration that Syria has used chemical weapons wasn't intended to embarass US Secretary of Defense Chuck Hagel, the bigger problem is how the US will deal with its own red lines, writes Ben Caspit. 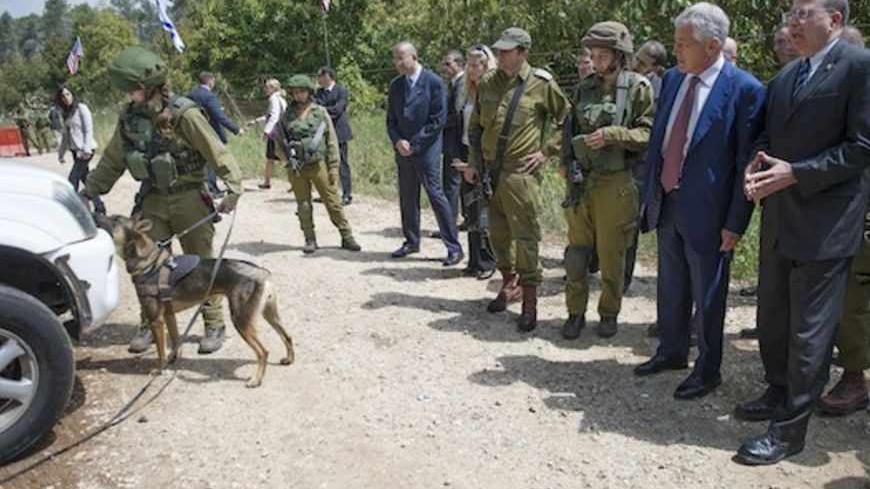 This was not your ordinary American request. Visits to Israel by high-ranking US officials, from the president on down, are generally extremely well-planned. Every second is measured, every minute planned, and the timetable scheduled months in advance; huge preparatory delegations survey the area and prepare a special dossier for the president, secretary of defense or secretary of state on everyone whose hand they'll shake during the visit. And yet, during US Secretary of Defense Chuck Hagel’s visit to Israel, the Americans threw a curveball: Hagel, they said, would very much like to meet Israeli soldiers — to talk to them, to look into their eyes, to learn about the Israeli Defense Forces (IDF) first hand, to reach out and touch it.

Hagel's schedule was already packed from start to finish. The Americans proposed shoehorning this visit on Tuesday morning, April 23, in between a meeting with Israeli Prime Minister Benjamin Netanyahu and Hagel's trip to the airport for his flight to his next stop. The office of Defense Minister Moshe "Bogie" Ya'alon delegated this task to the IDF, which came up with an improvised, though brilliant, solution. The Oketz Unit, the Israeli canine special-forces unit, considered the best of its kind in the world, is right on the route. There was one problem: the route is Highway 443, the convenient and quick alternative to Highway 1, the main road between Tel Aviv and Jerusalem. But Hagel did not go to the Oketz Unit via Highway 443, because the eastern part of the road passes through territory that was captured in 1967. The US-Israeli entourage traveled down Highway 1 as usual, and then cut across to Ben Shemen Forest, within the Green Line, where Oketz soldiers and their dogs were waiting.

Hagel and his colleague Ya'alon appeared at ease, happy, enjoying every minute. At one point, they asked if there was a dog named Bogie in the unit; when the laughing died down, the Israeli minister of defense retorted by asking whether there was a dog named Chuckie in the unit. The immediate mission of the Hagel visit, establishing a rapport between him and Ya'alon, was deemed a success. People who participated in some of the meetings reported real chemistry between the two. Among other things, the two of them met alone for close to an hour. Lt. Gen. Benny Gantz, the Israeli chief of staff, joined them for 15 minutes. Hagel is not said to be enamored of some of Ya'alon’s opinions, particularly when it comes to the Palestinian issue, but he apparently realizes that he is dealing with a serious, realistic, fair Israeli — one who won’t try to pull a fast one on him, who won’t try to get him entangled in the impossible and who will tell him the truth.

The visit covered all the immediate issues on the agenda: Iran, Syria, Hezbollah, the Palestinians. The crowning glory of the visit was the major arms deal the Americans put on the table to the Israeli military high command — including cutting-edge radar, air refueling tankers and the V-22 Osprey tiltrotor aircraft. The Americans seemed eager to sell the package to the Israelis, who were equally enthusiastic. An Israeli defense official told Al-Monitor this week that if it had been possible, Hagel would have happily come to Israel in an Osprey and left it here as a gift.

Both sides are now working out how to finance the deal. Soon meetings will begin between the Israeli and US defense establishments on the next round of military aid. The current agreement on US military aid to Israel will end in 2017, and a new agreement needs to be reached. It is believed that roughly the same level of aid is being discussed. Israel hopes to be able to buy what the Americans offered immediately, to receive the goods in the next year or two and to pay for them through US military aid that begins in 2018. The Americans suggested to the Israelis that this was negotiable.

As Hagel left Israel, a mini-scandal hit regarding intelligence cooperation between the two countries. Brig. Gen. Itai Brun, the director of Israel’s military-intelligence research group, and a gifted, serious and thorough officer, appeared at the annual conference of the Institute for National Security Studies headed by retired Maj. Gen Amos Yadlin, formerly chief of defense intelligence. While Brun scored several headlines, the most resounding involved his statement that Israel believes that the regime of Syrian President Bashar al-Assad had recently used chemical weapons in a number of specific incidents.

This statement, coming from a senior Israeli intelligence officer, sent an intercontinental ultrasonic boom, given that President Barack Obama himself said that the Assad regime’s use of chemical weapons would be a flagrant crossing of a red line, and would result in a dramatic American response. Brun’s appearance led to a truly ridiculous farce, in which American and Israeli officials alike began chasing their own tails in an effort to understand what was going on and how to extricate themselves from this mess — with as little egg on their face as possible. Hagel himself, as well as Secretary of State John Kerry, stated after Brun's appearance that they had no idea what he was referring to. Kerry said that he had spoken to Netanyahu, who couldn't confirm the statement. When it seemed that things couldn’t get any worse, the Americans did a backward Tsukahara just 24 hours later, saying that the Israeli assessment was correct — although it was just an assessment. There was no actual smoking gun, and it was still too early to draw final conclusions — and so on and so forth.

So what really happened here? This wasn't an attempt to embarrass Hagel. It was all very innocent. Brun’s comment wasn't coordinated with the government. “It was a slip of the tongue,” said an Israeli military source familiar with the details of the event. “The information he conveyed was correct, but was not ready to be presented as conclusive.” In other words: Israel still doesn't have a Syrian soil sample that would allow it to conclude definitively that chemical weapons were used. But there are many other indications that led to the assessment that chemical weapons were used, which is nearly definitive. “The gun isn’t smoking yet,” said an Israeli source, “but he’s already holding a cigarette in one hand and a lighter in the other.”

That’s why the material wasn't presented to Hagel in intelligence updates. That’s why the US was embarrassed after the statements were reported and why Netanyahu could not confirm their veracity in his phone call with Kerry. In Jerusalem, they understood that they had put the Americans in an uncomfortable position, and they were quick to tone things down. But reality isn’t toning itself down. The information Brun relied on exists, and it is solid and real — which is why the Americans were fair and admitted a day later that there was something to it.

This scandal isn't really important. What is important is its essence. Assad has almost certainly used chemical weapons. In the past, the US has threatened that, if that happened, they'd get involved. Either they shouldn’t have threatened that, or they need to find a way to back down. It’s hard work being a superpower. Once upon a time, it was sufficient to speak softly and carry a big stick. Today, it seems that the stick is more like a toothpick. This becomes even more poignant because Assad isn’t the problem. On the contrary, when he disappears — if he disappears — he will be missed. Under Assad, the region was stable, under control and managed. The Syrian border with Israel was quiet for over 40 years. The problem lies in Tehran. Over there, they are very curiously watching the US stick. Right now, they have no reason for concern.