Levin Says US Should Consider Limited Military Strikes on Syria 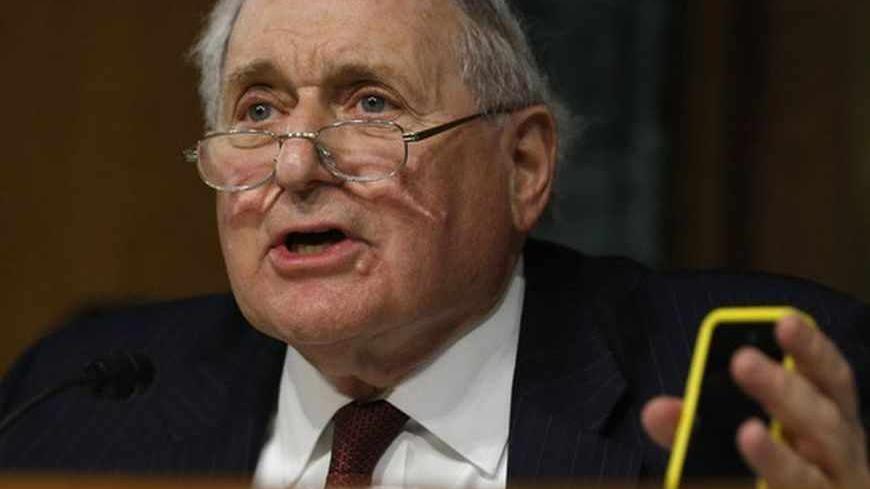 Senate homeland security and governmental affairs investigations subcommittee Chairman Carl Levin (D-MI) speaks during a hearing on offshore profit shifting and the US tax code, on Capitol Hill in Washington, May 21, 2013. - REUTERS/Jason Reed

The influential chairman of the Senate Armed Services Committee, Carl Levin (D-Mich.) said Wednesday, July 10, that the administration of President Barack Obama should prepare to target Syrian “airfields, airplanes and massed artillery” using stand-off weapons in addition to arming and training the opposition to the forces of Syrian President Bashar al-Assad.

Levin, who just returned from a lengthy visit to the Middle East, said only increased US support for vetted rebel groups could level the playing field with Assad and his Russian, Iranian and Hezbollah allies and lay the ground for a political settlement. These limited but “essential steps,” he said, afford “the best hope and perhaps the only hope” to end a two-year-old conflict that is threatening US national interests by destabilizing Syria’s neighbors and creating potential “safe havens” in Syria for anti-US extremists.

The veteran legislator, who is not running for re-election in 2014, conceded in a major address at the Carnegie Endowment for International Peace that there is scant US popular support for increased involvement in the Syrian conflict and “no consensus” on the issue on Capitol Hill. Indeed, recent polls show that a majority of Americans opposes even giving weapons to Syrian rebels.

After the Afghan and Iraq wars, “We know the American people are very dubious” about any new US military involvement abroad, he said.

It took US confirmation that Assad had used chemical weapons and a Syrian-Hezbollah victory in the town of Qusair for Obama to announce last month that the United States would send arms directly to the Syrian opposition.

Levin would neither confirm nor deny reports that congressional intelligence committees are holding up deliveries of these weapons to the Syrian Military Council out of concern that the arms could wind in the hands of Jabhat al-Nusra and other anti-US groups.

Levin said he was confident that the United States could channel aid to forces led by Gen. Salim Idriss, head of the Syrian Military Council. The Obama administration has tested these channels by supplying military rations and medical kits to forces under Idriss’ control. Levin said several times that the United States should supply anti-tank weapons to the rebels but made no mention of shoulder-fired missiles. He added that Syrian society was not inherently extremist and “We have reason to hope” that a post-Assad government would be able to “marginalize and expel” foreign fighters and other terrorist groups.

In describing new steps to bolster approved opposition groups, Levin said the United States should develop a “broad international coalition” including members of the so-called London 11 or Friends of Syria to lay out “options for limited strikes” on Syrian military targets. Pressed for details by Al-Monitor, Levin said these targets could include “airfields, airplanes and massed artillery” which have been pounding Syrian cities, killing civilians and forcing tens of thousands to flee. After recent attacks on Qusair and Homs, Levin said Hama in the north and Daraa in the south were next in line for “massacres” by Assad forces.

Levin said it would not be necessary to send American planes over Syrian airspace to take out Syrian air defenses and that the attacks could be done with missiles and rockets and other “stand-off weapons” from outside Syrian territory. He said that the mere announcement that the United States and its allies had begun to plan such strikes would send a message to Assad and his backers and help to bring about a political settlement.

On other matters, Levin:

In pushing for more US support for Syrian rebels Levin said he was acting primarily out of concern for US national interests, with the humanitarian plight of Syrians a secondary consideration. He said he feared that without more US action, the region would be further destabilized, other leaders might resort to the use of chemical weapons and terrorist groups would be strengthened and set up safe havens in Syria like those used by al-Qaeda in Afghanistan and Yemen.

“Unified limited action to support insurgents is the best hope of showing Assad that he can’t succeed,” Levin said. It is “the best of bad options.”