US Considers Next Steps in Syria

The Obama administration, which acknowledges Syria probably used chemical weapons, is likely to use the information to rally Russian support at the Security Council. 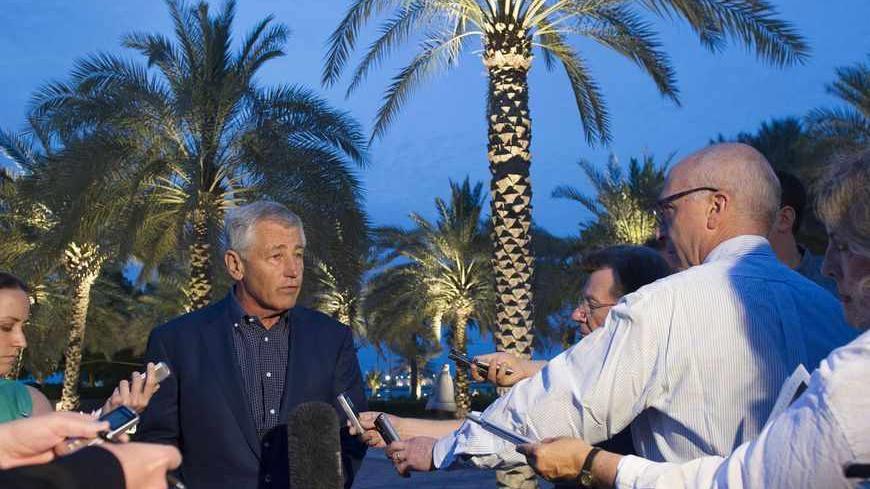 US Secretary of Defense Chuck Hagel speaks with reporters after reading a statement on chemical weapon use in Syria during a news conference in Abu Dhabi, April 25, 2013. - REUTERS/Jim Watson/Pool

US confirmation that chemical weapons have likely been used in Syria gives the Obama administration a new opening to press Russia to support UN Security Council condemnation of the Assad government, but is unlikely to lead to direct US military intervention in the Syrian civil war.

President Barack Obama last August for the first time declared use or transfer of chemical weapons by Syria “a red line.”

“We have been very clear to the Assad regime, but also to other players on the ground, that a red line for us is we start seeing a whole bunch of chemical weapons moving around or being utilized,” Obama told NBC. “That would change my calculus. That would change my equation.”

However, his administration has been coy about what action it would take to respond to such cases.

On Thursday [April 25], the White House acknowledged for the first time in a letter to several senators that sarin gas has likely been used on a “small scale” by the Syrian government against its opponents. The administration’s hand was forced not just by Congress but by a comment two days earlier by a senior Israeli intelligence analyst, Brig. Gen. Itai Brun, who told a security conference in Tel Aviv that the Israeli government had “direct” evidence of such use. Britain and France made similar accusations in a letter last week to UN Secretary-General Ban Ki-moon. The Emir of Qatar, Sheikh Hamad bin Jassim bin Jaber Al Thani, said Wednesday night in Washington that Syria had employed chemical weapons to “test” the international response.

Defense Secretary Chuck Hagel, who has been traveling in the Middle East and peppered with questions about the Israeli comment, made the announcement.  “My role is to give the president options on a policy issue,” Hagel told reporters traveling with him in Abu Dhabi. “That’s a policy issue. We’ll be prepared to do that at such time as the president requires options.”

Only a week ago, Hagel and Gen. Martin Dempsey, the chairman of the Joint Chiefs of Staff, told Congress that Obama had until then not asked them to provide options for "additional military pressures" on the Syrian government.

Although Syria in March requested an investigation into reports that chemical weapons were used at Khan al-Assal near Aleppo, it has so far refused access to a UN team. There were also reports by the Syrian opposition of chemical weapons use at Ataibah east of Damascus.

A senior Obama administration official, speaking on condition of anonymity, told reporters in a conference call Thursday that “there are ways for us to establish the facts” even if the UN team remains barred. Evidence is said to have come from blood samples of several individuals that showed traces of the nerve gas.

The official went on to make comments suggesting that the US was looking to build a case to influence public opinion and to underpin action by the international community at the UN Security Council.

“It’s very important that that we are able to establish this with certainty and that we are able to present information that is airtight in a public and credible fashion to underpin all of our decision-making,” the official said. “But what we will ultimately do is going to be informed by what we believe is going to make the greatest difference.  And that is a judgment that we want to reach not just by ourselves, but in close coordination and consultation with other countries -- beginning with our close allies, countries like the British and the French, who have closely worked with us on this issue of chemical weapons and on the issue of Syria more generally; also the countries in the region that we've been working very closely with -- Turkey, our Gulf partners, Jordan.”

Jordan’s King Abdullah is in Washington for consultations this week and met Thursday with Vice President Biden. Abdullah is due to see Obama on Friday. On Thursday, Jordan’s UN ambassador sent a letter to the Security Council asking it to declare the presence of more than half a million Syrian refugees in Jordan “a threat to international peace and security.” According to the letter, between 1,500-2,000 Syrians are arriving in Jordan every day fleeing a conflict that has killed 80,000 people and displaced millions over the past two years.

Turkey is also hosting several hundred thousand refugees as well as offices of the Syrian opposition – both political and military. Asked by Al-Monitor on Wednesday [April 24] how Turkey foresaw a resolution to the Syrian crisis, Egemen Bağış, Turkish minister for EU affairs, who is visiting Washington in advance of his prime minister, Recep Tayyip Erdoğan, said: “President Obama needs to convince [Russian] President [Vladimir] Putin not to support that dictator Assad.”

The US objective remains a political settlement that would oblige Assad to step down. The Syrian leader, however, has sounded increasingly confident that his government can survive and has sought to denigrate the opposition as dominated by radical Sunni Muslim extremists connected to al-Qaeda and supported by outside powers.

Russia last summer warned Syria not to use chemical weapons but has been skeptical about the latest charges. On Tuesday, Russian Foreign Minister Sergei Lavrov warned against repeating what he called the “Iraqi scenario” — implying that the United States would use claims that Syria used weapons of mass destruction as the basis to lead a foreign invasion.

Far from seeking an excuse for military action, however, the Obama administration has so far focused on a political solution and building support for the Syrian opposition, not military assistance, despite pressure from Congress. The Obama Administration has, however, sent Patriot missiles to protect Turkey and US Special Forces to Jordan to train rebels and analyze intelligence about the course of the war.

The US has also provided humanitarian help and “non-lethal supplies” such as halal “meals ready to eat” but has refused to send weapons out of concern both in Washington and Israel that the arms might wind up in the hands of Sunni extremists or the Lebanese militant group, Hezbollah.

US Director of National Intelligence James Clapper testified to Congress last month that al-Qaeda in Iraq’s Nusra Front “is one of the best organized and most capable of the Sunni terrorist groups” and that the Syria conflict has allowed it to establish a presence in Syria. Former White House official and terrorism expert Bruce Reidel considers Jabhat Al-Nusra the “fastest-growing al-Qaeda franchise” in the world.

Israel, meanwhile, has shown a willingness to take military action on its own, striking several targets in Syria in January, including A-17 surface-to-air missiles stored outside a military research center near Damascus.

With Thursday’s acknowledgement, however, pressure is growing in Congress for more assertive US action, even as US public opinion remains opposed to major American involvement in another Middle East war.

Sen. Robert Menendez, D-NJ, chairman of the Senate Foreign Relations Committee, said in a statement that the Assad regime “has crossed a red line by using chemical weapons” and that the US should “consider all options as to how we act to influence the balance of the conflict” including enforcing a no fly zone and providing weapons. At a minimum, Menendez said, “We must do everything possible to prevent the regime’s use of chemical weapons and to ensure those stockpiles are secure.”

Last month, Senators Carl Levin, D-Mich, chairman of the Senate Armed Services Committee, and senior Republican committee member John McCain, R-Ariz., sent a letter to Obama asking him to establish a “safe zone” along Syria’s border with Turkey and to redeploy Patriot missiles from Turkey to protect the zone.

A White House spokesman, speaking on condition of anonymity, did not confirm or deny that initial reaction to the chemical weapons allegations would likely be diplomatic, telling Al-Monitor: “We’re considering all options.”