Royce Says US Arms Not Required to Defeat Assad

Ed Royce, chairman of the House Foreign Affairs Committee, tells Barbara Slavin that the US should encourage Arab allies to provide the weapons needed to help rebels oust the Syrian government. 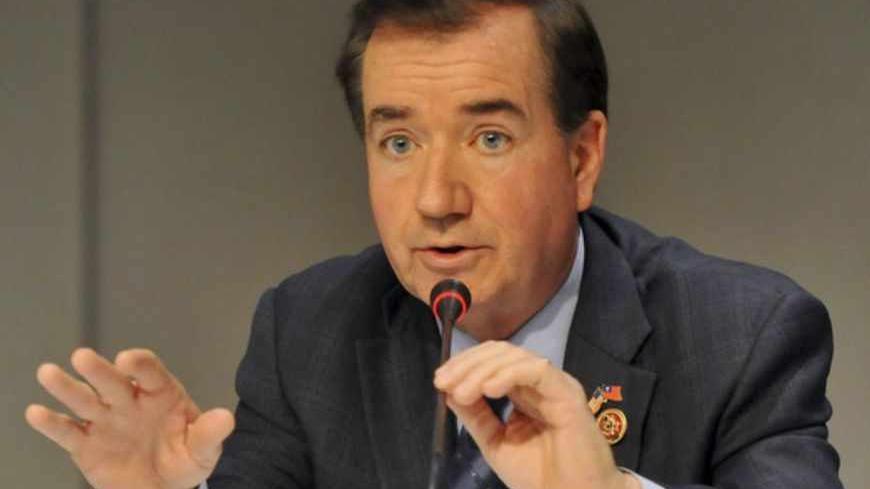 Edward Royce, chairman of the US House Committee on Foreign Affairs speaks during a press conference in Taipei on Jan. 28, 2013. - Mandy Cheng/AFP/Getty Images

The chairman of the House Foreign Affairs Committee wants the Obama administration to encourage Arab allies to provide the Free Syrian Army with weapons to counter Syrian government artillery, but says the United States does not need to patrol a no-fly zone or provide arms on its own.

Rep. Ed Royce, a Republican from southern California who took over the chairmanship of the committee this year, also told Al-Monitor in an extensive interview late Monday (May 6) that the regional expansion and escalation of the Syrian conflict were in part a function of inadequate American leadership.

“This is a consequence of not working in tandem early on with our allies who made repeated requests for the United States to exercise more leadership, and so yes, you do have a situation where there is Balkanization,” Royce said. He blamed the Obama administration for failing to quickly put into place a process to vet officers of the Free Syrian Army and said the US should also have been more proactive in discouraging Qatar from funneling arms to foreign fighters affiliated with Islamic extremists.

Royce, who is serving his 11th term in congress, is best known for defending the rights of domestic victims of crime — expanding laws against stalking and alerting authorities nationwide to the abduction of children. But he has been a member of the Foreign Affairs Committee since entering the House in 1993 and in the interview, exhibited fluency on a wide range of issues.

In an otherwise polarized chamber, Royce also appears to get along well with ranking Democrat Eliot Engel of New York, with whom he traveled to the Middle East last week. The two are co-sponsoring a new bill that would expand sanctions on Iran.

“He’s a serious guy and he tries to look at problems from an analytic perspective,” said a Capitol Hill staffer who spoke to Al-Monitor on condition of anonymity.

That contrasts with the previous Republican committee chair, Ileana Ros-Lehtinen of Florida, who was viewed as more ideological and partisan.

On Syria, in the aftermath of reports that the government may have used chemical weapons, the Obama administration is said to be considering providing arms directly to the rebels. Royce’s Senate counterpart — Robert Menendez, D-NJ — introduced a bill on Monday that would authorize the administration to provide weapons — excluding the shoulder-fired missiles known as manpads — to carefully vetted members of the opposition.

“We should be conveying to our Arab allies in the Middle East who unquestionably have the capacity …we should give them the green light to provide the artillery necessary for the counter-battery work,” Royce said in the interview. “There’s abundant capability to deliver that weaponry. The weaponry does not have to come from the United States. But some of the leadership has to come from the United States, and that’s not just a view expressed by Middle Eastern governments — you can get the same view from European governments.”

Royce declined to identify which country or countries could be the source of the weapons although Jordan — a neighbor of Syria and long-time US ally already hosting American trainers and intelligence officers — appears the likeliest candidate, with likely funding from Qatar and Saudi Arabia, which already provide money and arms to Syrian rebel groups.

The Obama administration asserts that even as it increases support for the rebels, its goal remains a negotiated end to the war, which has claimed the lives of more than 70,000 people, created over a million refugees and displaced millions of others within Syria. Secretary of State John Kerry is visiting Russia this week to try to convince Russian leader Vladimir Putin to encourage Syrian President Bashar al-Assad to step down in favor of a transitional government.

Royce, however, dismissed suggestions that a negotiated resolution of the war is likely, saying that Assad has demonstrated no inclination to resign or to reform the Syrian political system.

“People have been trying to talk to Assad for a generation and there hasn’t been any indication that on his part, negotiations were about anything but stalling, resisting modernity, any acceptance of political pluralism, any openness to individual rights in his country or to lessening the rather totalitarian type of governance,” Royce said. “I’m suspicious that negotiations will be successful because by habit, this regime has so far resisted any evolution toward better governance and responsibility.”

Another element of US policy involves at least tacit support for periodic Israeli strikes on Syrian weapons caches that both Israel and the US fear might wind up in the hands of Hezbollah.

Royce said, however, that he doubts that Israel is informing the US prior to hitting Syrian targets.

“I don’t know that there’s any consultation whatsoever and I suspect that there may well not be because Israel’s red line with respect to Syria has to do with transferring weapons to Hezbollah which could be used against Israel,” Royce said. “That’s a different construct than what our administration is talking about, which is using chemical weapons on its own people… Israel is apparently moving to take action where they see that transfer underway.”

While in the Middle East, Royce said he also discussed the Israeli-Palestinian peace process, which has shown a few flickers of life after years in a political coma. Last week, members of the Arab League agreed to modify a 2002 peace plan to include minor changes to Israel’s 1967 borders.

Royce said he did not raise the plan specifically with Israeli Prime Minister Benjamin Netanyahu, who has responded to the Arab League offer with little discernible enthusiasm.

The Israeli leader, Royce said, “supports engagement with an interest of obtaining a two-state solution, doing it in a way that brings along the support of the people of Israel and is cognizant of Israel’s security.”

Royce said he also met with Palestinian President Mahmoud Abbas and outgoing prime minister Salam Fayyad. The Capitol Hill staffer who spoke to Al-Monitor said that holds placed on hundreds of millions of dollars of US aid to the Palestinian Authority last year — when Ros-Lehtinen chaired the House Foreign Affairs Committee — were one reason Fayyad is leaving. The PA was being punished for seeking formal membership in the United Nations — even though the effort failed.

Royce said this was not the reason Fayyad resigned. The committee chairman would not say why the widely respected, US-educated technocrat was stepping down, but referred to a recent interview with Fayyad by New York Times columnist Roger Cohen that listed a long litany of frustrations Fayyad has faced from other Palestinians as well as Israelis and Americans.

Finally on Iran, Royce took a tough stance, saying that only even more draconian sanctions like those contained in a new bill he is sponsoring might persuade the Iranian government to give up what Royce called a nuclear-weapons program.

The new bill, dubbed the Nuclear Iran Prevention Act of 2013, would designate Iran’s Revolutionary Guard as a foreign terrorist organization and sanction a number of Iranian leaders, including the supreme leader and president. The legislation, which does not yet have a counterpart in the Senate, also seeks to reduce overall trade, not just in the petroleum sector.

“We’d like to extend the full measure of sanctions now while there’s time so that the damage to the Iranian economy is so severe as to give the theocracy running the country the choice between compromise and economic implosion,” Royce said.

A number of Iranians and Iranian-Americans have complained that the latest sanctions on Iran’s banking system are also interfering with the supply of food and medicine to Iran, even though those items are supposed to be exempt from sanctions. Royce said Iran could buy medicine using funds in countries such as Japan and India that still purchase Iranian oil. Under US regulations that went into effect in February, Iran is barred from repatriating those earnings.