Members of the House Foreign Affairs Committee focus on potential adverse fallout from a US strike on Syria, including emboldening extremist opposition to Bashar al-Assad. 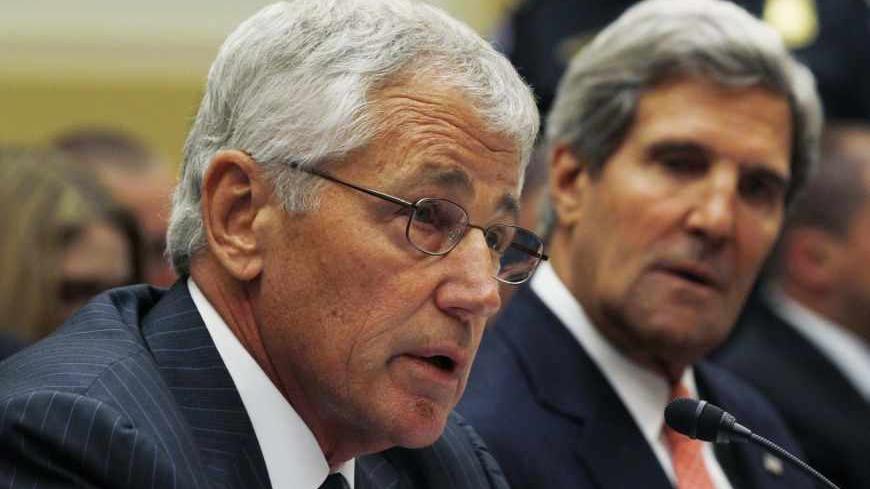 US Secretary of Defense Chuck Hagel (L) testifies alongside Secretary of State John Kerry at a US House Foreign Affairs Committee hearing on Syria on Capitol Hill in Washington, Sept. 4, 2013. - REUTERS/Jason Reed

Obama administration arguments in favor of striking Syria to deter it from using chemical weapons again met tough questioning Wednesday, Sept. 4, in a skeptical House of Representatives that focused less on shoring up US credibility than on the potential costs and unintended consequences of direct US military involvement in Syria’s civil war.

A secondary argument by the executive branch has been that it is necessary to strike Syria to convince Iran that President Barack Obama was not bluffing when he also vowed to prevent Iran from developing nuclear weapons. However, during a hearing that lasted more than four hours, only seven of 35 members of the House Foreign Relations Committee who posed questions to top US officials stressed the Iran angle. Many more asked if US action would embolden Islamic extremists who oppose the Syrian regime and why it was an American responsibility to respond to what did not appear to be an imminent threat to US national security.

“We shouldn’t be drug [sic] into someone else’s civil war where there are no good guys,” was the way Jeff Duncan put it. The South Carolina Republican said that he had spoken to hundreds of his constituents and “not a one say get involved.”

Ted Poe of Texas, another conservative Republican, had perhaps the most memorable line among the questioners, saying that Syrian President Bashar al-Assad is “wasting good air breathing.” But despite his abhorrence for Assad, Poe said he was convinced that “there is no pure side in this civil war.”

Overall, the hearing confirmed public opinion polls that show that only a minority of Americans back even limited strikes against Syria to punish the Assad regime for alleged nerve gas attacks that killed hundreds of civilians in a Damascus suburb on Aug. 21. While a measure authorizing strikes passed the Senate Foreign Relations Committee on Wednesday and is likely to pass the full Senate, there are questions about whether the Republican-majority House of Representatives will approve, even though both Republican and Democratic leaders in the House have promised to vote in favor — and the influential American-Israel Public Affairs Committee has urged House members to support authorization.

The comments at Wednesday’s hearing suggested that the Obama administration still faces a major challenge convincing members of both parties that failure to act now would invite worse consequences and not embroil the United States in a third regional war.

Secretary of State John Kerry, Defense Secretary Chuck Hagel and the chairman of the Joint Chiefs of Staff, Gen. Martin Dempsey, sought to convince committee members that Assad would use chemical weapons again with impunity if the United States did not act now. They also warned that chemical arms might wind up in the hands of Islamic extremists and said that it was necessary to uphold the international norm against the use of such weapons to protect US troops serving abroad as well as the American homeland.

“I haven’t lived in a world where chemical weapons were militarily routinely used and I don’t want to live in that world,” Dempsey, who has served in the US Army for nearly 40 years, said at one point.

Hagel, a decorated Vietnam War veteran, brought up 9/11 in response to a question from California Democrat Ami Bera, who said that for his constituents, “These issues seem very far away.”

“How many of my constituents even knew where Afghanistan was” prior to the 2001 attacks on the World Trade Center and Pentagon, Hagel, a former senator from Nebraska, noted. At the same time, Hagel conceded that he could not guarantee that forces friendly to the United States would come to power in Syria should Assad fall. The situation, Hagel said, “is unpredictable, complicated and dangerous.”

Hagel and Kerry both raised Iran and what they insisted was a need to show Iranians that when the president of the United States defines a “red line,” foreign leaders cannot step over it without severe consequences. Obama, in addition to promising to act in response to a major use of chemical weapons by Assad, has vowed to prevent Iran from developing nuclear weapons.

“Iran, I guarantee you, is hoping we look the other way” about Syria, Kerry said Wednesday.

Cotton, normally a staunch opponent of the Obama administration, was the most vociferous on the subject of Iran. He repeated a line from an op-ed he co-wrote that was published Wednesday in the Washington Post, asserting, “The day the United States doesn’t act is the day that [Iranian Supreme Leader] Ayatollah Khamenei spins his centrifuges into overdrive.”

Royce, who in an interview with Al-Monitor in May  was extremely cautious about US intervention in Syria and opposed having the United States even send arms to vetted Syrian rebels, raised a number of questions Wednesday about the nature of the Syrian civil war and the lack of broad international backing for US strikes. But Royce emphasized in his opening statement that “countries like Iran are watching. And yes, a credible threat is key to putting the brakes on Iran’s nuclear program.”

Engel, a strong supporter of both the Syrian opposition and sanctions on Iran, said failing to support Obama would send a “message to the dictators in Tehran and Pyongyang.”

In an interesting aside, however, Kerry noted that “there is evidence that both Iran and Hezbollah have opposed the use of chemical weapons.” Iranian leaders have condemned chemical weapons use but only former President Akbar Hashemi Rafsanjani has blamed the Syrian government for the Aug. 21 deaths.

Overall, the hearing conveyed deep American war weariness after more than a decade of fighting in Afghanistan and Iraq — countries where US-led efforts have failed to implant stable democracies despite trillions of dollars spent and thousands of American soldiers, and many more natives, killed and injured.

Tom Marino (R-Pa.), said “I cannot and will not vote for this intervention” after Hagel conceded that even limited US strikes on Syria would cost American taxpayers “in the tens of millions of dollars.”

Ted Yoho (R-Fla.), asserted that it was “unconstitutional to attack people who didn’t attack us” and that the overwhelming message from his constituents was “Heck no!” when it came to any new US military adventure abroad.

In response, Kerry stressed, “I don’t believe we’re going to war” and suggested that unspecified Arab countries would pick up the costs of US intervention. Kerry also echoed two of his predecessors — Colin Powell, who frequently noted that the United States went to war to help other people without taking any territory in return, and Madeleine Albright, who called the United States “the indispensable nation” in advocating successfully for US military intervention in the former Yugoslavia in the 1990s.

“We are the indispensable nation,” Kerry, a Vietnam veteran who turned against that war, said. “We should be proud of what we’ve achieved. … A lot of people in the Middle East count on us,” he continued. “We have to have a larger view.”