Senators of both parties aggressively confronted State Department officials who hinted at an expanded military role in Syria. 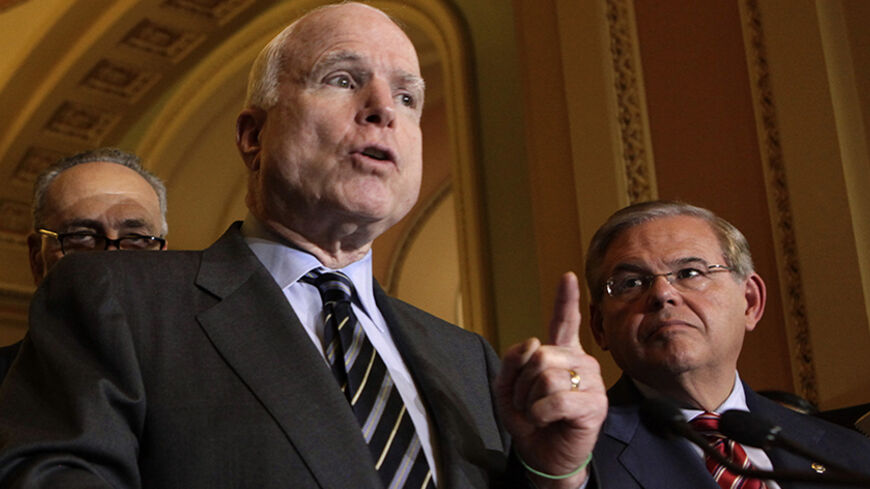 Democrats and Republicans alike tore into State Department officials over the Obama administration's Syria policy during a confrontational Senate hearing on Wednesday.

Members of the Senate Foreign Relations Committee took offense to the suggestion that the administration is considering stepped up military options in the country but could not discuss them publicly.

The comment from Assistant Secretary of State for Near Eastern Affairs Anne Patterson that the administration favors "support of all sorts" for the rebels sparked an outraged response from the usually mild-mannered top Republican on the panel, Sen. Bob Corker, R-Tenn., who called the answer "major baloney."

"I can't imagine you saying that in this setting," Corker said. "That would indicate to people that we have a military strategy relative to Syria. And that could not be further from the truth."

He went on to call the suggestion "one of the most major, misleading baloneys I've heard since I've been in the United States Senate."

Patterson said she would not be "bullied" into revealing classified discussions in an open setting and offered to take the discussion "offline."

He demanded a closed briefing for the administration to reveal to Congress all the military options that are under consideration, all overt and covert assistance to the rebels and the planned consequences if Syria doesn't turn in its chemical weapons arsenal by the June 30 deadline or if undeclared weapons are discovered.

The administration announced last summer that it would begin supplying light weapons to vetted rebel groups after concluding that Bashar al-Assad's forces had used chemical weapons. The weapons were held up by lawmakers concerned about its recipients but have reportedly started flowing in through Jordan, but some lawmakers are clamoring for more substantial aid.

Corker also ripped into Tom Countryman, the assistant secretary of state for international security and nonproliferation, after he defended the US-Russian effort to get Assad to turn in his chemical weapons as "actual security losses for him."

"With respect," Corker said, "I think you're delusional."

Corker argued that Assad's alleged use of chemical weapons to kill 1,200 people last year turned into a strategic victory that boosted Assad's political standing ahead of presidential elections due in June.

Patterson said the top US goals in Syria were to change the calculus on the battlefield and to deny a safe haven for Islamist militants in the war-ravaged country.

"Those are two issues that need to be addressed urgently," Patterson said.

The assertion was met with disbelief by Sen. John McCain, R-Ariz., a longtime advocate of arming the rebels.

McCain also denounced the recent peace talks in Geneva, pointing out that the family members of some of the opposition figures who attended have since been kidnapped. Patterson defended the talks as helping to unify the opposition and boost its political legitimacy, but McCain wasn't impressed.

"You are here defending the indefensible," he said, calling the Geneva peace talks a "total and abysmal failure."

The hearing caps weeks of mounting frustration on the committee as Syria enters its fourth year of conflict.

The panel has been more hawkish on Syria than the rest of Congress and voted 10-7 in September to allow military strikes against Syria following its alleged use of chemical weapons. President Barack Obama called off the strike after Syria agreed to a US-Russian plan to abandon its chemical weapons stockpile.

Menendez and Corker signed a March 14 letter to Obama urging the administration to “engage Congress as your team moves forward in developing and implementing policy options” on Syria.

"Throughout the Syrian civil war, we have welcomed efforts to provide humanitarian support — both in terms of financial and material assistance. However, events on the ground are proving that this is not enough, as the Assad regime escalates its attacks against civilians and refuses to allow humanitarian relief to reach those in need," they wrote. "The only way to make Geneva a viable process is to change the current balance of power and alter Assad’s calculus so that he no longer believes he can remain Syria’s ruler."

Separately, Kaine has introduced a resolution demanding that the Obama administration present Congress with a new humanitarian strategy within 90 days.

House members are also demanding a Syria policy reboot. The chairman and ranking member on the House Foreign Affairs panel, Reps. Ed Royce, R-Calif., and Eliot Engel, D-N.Y., have introduced their own humanitarian aid resolution, which requests the administration to present a strategy within 60 days and urges the administration to stop legally recognizing Assad.