Senate panel calls for new US strategy for Syria

The Senate Foreign Relations Committee has approved a non-binding resolution that calls on the Obama administration to provide a new strategy to deal with the humanitarian crisis in Syria. 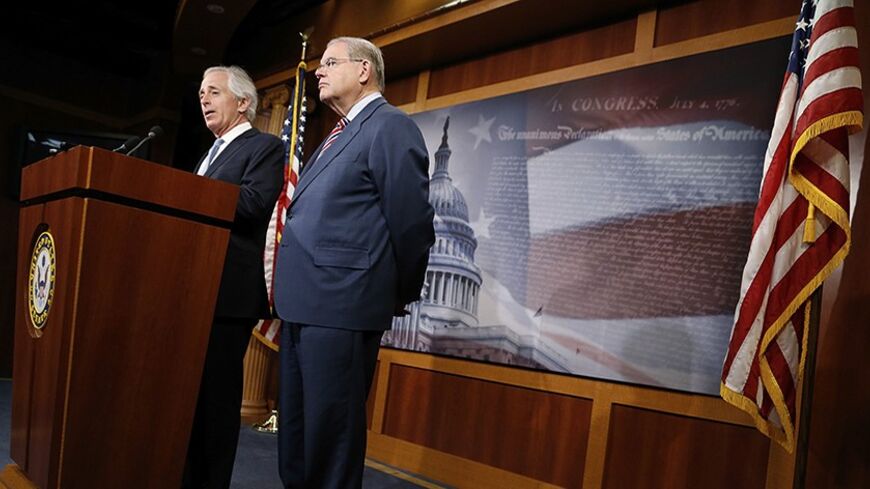 The Senate Foreign Relations Committee approved a resolution on Tuesday that asks the Obama administration to provide Congress with a humanitarian strategy for Syria within 90 days.

The congressional debate over how to beef up US humanitarian aid to Syria is also revealing congressional frustration about the Obama administration's dealing with Congress on Syria and its inability to bring the war to an end.

The non-binding resolution from Sen. Tim Kaine, D-Va., easily cleared the panel by unanimous voice vote, but a number of senators used the opportunity to express their frustration that Syrian President Bashar al-Assad has been able to escape justice.

"We have to hold those who are responsible accountable," said Sen. Ben Cardin, D-Md., the driving force behind the Magnitsky Act sanctions targeting Russia and other human rights efforts. "We go through more and more conflicts where at the end of the day, people who caused the problem are left off and nothing's done."

The House resolution calls on the Obama administration to stop recognizing the Assad regime as the rightful government of Syria and asks that the UN suspend its membership in the General Assembly "until such time as the Assad regime has ceased attacks upon civilians, and granted free and unfettered access for deliveries of humanitarian assistance throughout the territory of Syria."

The Senate effort, however, has the blessing of a number of aid groups that need access to civilians trapped on the ground.

"Those organizations that have humanitarian aid efforts on the ground face a particularly sticky situation in terms of their ultimate goal of making sure that Syrian civilians get the aid they need," said one of the participants in the effort. "Access to that aid can be impeded by the very human rights violators and abusers who need to be held accountable."

The source called it "unlikely" that such organizations "could endorse a resolution that calls for a derecognition."

Kaine said his resolution was borne of trips he's taken to refugee camps in the region, notably in Lebanon and Jordan.

"The US is the largest provider of humanitarian aid to Syrian refugees in the world," he said at the mark-up, "but virtually all of that aid is outside of Syria because of the difficulties of delivering aid inside."

His resolution "calls on the president to develop and submit to the appropriate committees of Congress within 90 days from adoption of this resolution a strategy for United States engagement in addressing the Syrian humanitarian crisis, to include assistance and development, and protecting human rights inside Syria and in the region."

Human rights groups expressed hope that the resolution could embolden the UN to take a tough stance as it enforces Security Council Resolution 2139, which demands that the Syrian government and rebel forces cease attacks against civilians and allow access to humanitarian aid.

Tuesday's mark-up also made clear the growing frustration members of both parties feel about being left out of the loop.

"It's very difficult for us as a foreign policy partner to have any idea what's happening there because they won't sit down and brief us and tell us what is occurring," said Tennessee Sen. Bob Corker, the top Republican on the committee. "I doubt you're going to get this humanitarian strategy ... but I appreciate the intent."

Illinois Sen. Dick Durbin, the No. 2 Democrat in the Senate, disagreed with the contention that the administration has no plan. He said he'd been briefed separately.

Committee Chairman Robert Menendez, D-N.J., said he and Corker were writing a letter to the National Security Council demanding a briefing on US covert actions in Syria, including efforts to arm the rebels, after tearing into Assistant Secretary of State Anne Patterson last week when she refused to answer some of their questions in open session last week. Several Democrats asked to join the letter.

"When the committee membership is well-informed about what goes on ... I think we would be better instructed as to how we might proceed," Menendez said. "Sometimes we might be helpful, sometimes we might want to stay out of the way. But we don't know if you're getting in the way if you don't know what's going on."

Some lawmakers have raised similar concerns about the administration's reluctance to share details of its interim nuclear deal with Iran.

Members said getting access to classified information in a timely manner is a "structural challenge" that the administration must address.

"I understand that we're not the Intelligence Committee, but the Intelligence Committee isn't going to be asked — and isn't asked — to make decisions abut war and peace and sign off on resolutions and authorizations regarding military force," said Sen. Chris Murphy, D-Conn. "And this committee really is going to have that responsibility ... then we absolutely should expect that at the very least the chairman and the ranking member should be given all of the information necessary."