Virginia Sen. Tim Kaine, the Democratic chairman of the Senate Foreign Relations Subcommittee on Near Eastern, South and Central Asian Affairs, has introduced a bipartisan resolution calling for the Obama administration to introduce a humanitarian strategy in 90 days. 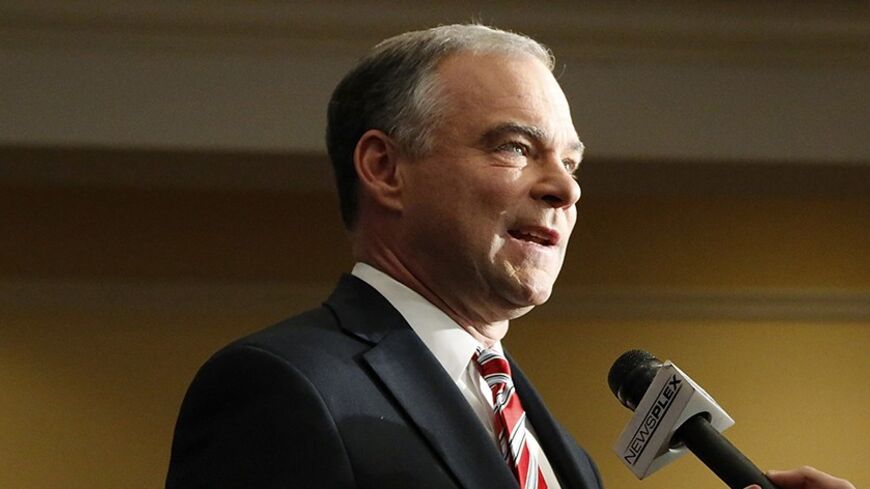 Sen. Tim Kaine does a series of interviews in Virginia, Nov. 6, 2012. - REUTERS/Jonathan Ernst

Nineteen senators introduced a bipartisan resolution on Thursday requesting that the White House beef up its humanitarian aid to Syria.

The effort underscores growing frustration in Congress as Syria prepares to mark the third anniversary of an uprising that has left more than 140,000 people dead. While nonbinding, the resolution could be a prelude to increased congressional pressure on the administration to step up its involvement in the uprising against Syrian President Bashar al-Assad.

“I think this is a significant challenge; the US has done a lot, but we need to do more,” the resolution’s sponsor, Sen. Tim Kaine, D-Va., told Al-Monitor after attending a vigil outside the Capitol on the third anniversary of the uprising.

Asked if more legislation would be expected in the coming weeks, Kaine said “it is certainly possible.”

“We’re going to get this one over the goal line, I’m confident,” Kaine said, “but then we ought to be doing more and we need to keep exploring every avenue we can to make the [political settlement] talks in Geneva more productive.”

Meanwhile, House Foreign Affairs Chairman Ed Royce, R-Calif., prepared to unveil his own resolution along with ranking member Eliot Engel, D-N.Y., after meeting with physicians with the Syrian American Medical Society and other activists in his office on Thursday. Details weren’t immediately available.

“It’s been three years, and our hearts really go out to the victims in these communities,” Royce told Al-Monitor. “As the relief efforts are stymied, we’re looking at ways that we can get assistance in, we’re looking at what we can do to ramp up food and medicine assistance for those who are under siege. And we’re looking at steps to try to deter … the means with which Assad has now taken this to the civilian population.”

The Senate resolution gives President Barack Obama 90 days to “develop and submit” to Congress a “strategy for the United States engagement in addressing the Syrian humanitarian crisis, to include assistance and development, and protecting human rights inside Syria and in the region.”

It was spearheaded by Sens. Tim Kaine, D-Va., and Marco Rubio, R-Fla., respectively the chairman and No. 2 Republican on the Senate Foreign Relations panel on the Middle East. Both lawmakers have called for a greater US role in Syria, with Kaine voting for military strikes last year and Rubio pressing the administration to arm vetted rebel groups.

“I refuse to accept there’s nothing more we can do to end the suffering,” Kaine said in a statement. “The numbers defy belief — nearly 3 million Syrians have fled to neighboring countries and more than 5.5 million children are in desperate need of assistance. I’m pleased to join my colleagues in calling for a new US strategy to address the humanitarian tragedy that Syria’s dire situation demands.”

Kaine said he would join a global coalition of humanitarian and human rights organizations at a vigil outside the Capitol Thursday night. Also, Syrian-American activists planned to read 100,000 names of dead Syrians in front of the White House over the next few days.

“It is clear by now that the measures taken to try and end Bashar al-Assad’s brutality against the Syrian people have failed,” Rubio said in a statement. “As long as the Assad regime continues to ignore deadlines and break promises without fear of consequence, millions of Syrian civilians, including children, will continue to suffer and even be indiscriminately killed. The administration should act quickly to propose a new strategy that includes concrete actions to increase pressure on Assad instead of giving him more room to maneuver and commit these atrocities.”

The resolution follows three reports — from UNICEF, Save the Children and World Vision — released this week that found that more than 5.5 million Syrian children have been impacted by the Syrian conflict.

The Obama administration has defended its Syria policy, repeatedly highlighting that it has set aside $1.7 billion for humanitarian aid to people affected by the war in Syria — more than any other nation.