The non-binding House resolution conditions recognition of the Syrian government on its full cooperation on humanitarian relief, while allowing “negotiations with Assad’s regime” to continue. 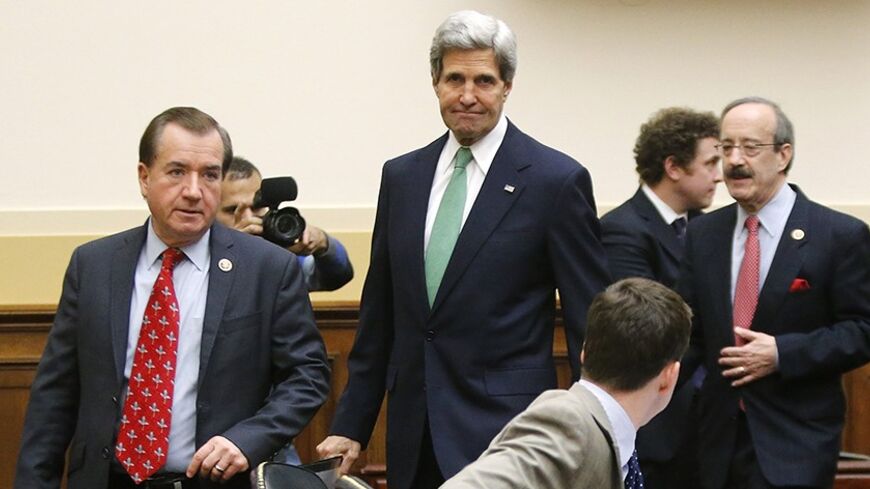 Reps. Ed Royce, R-Calif., and Eliot Engel, D-N.Y., unveiled a non-binding resolution on Friday that “urges the Administration and allies of the United States to formally withdraw their recognition of Bashar al-Assad’s regime as the rightful Government of Syria, unless and until the Assad regime and its supporting militias discontinue their barbaric slaughter, systematic starvation, and other grave human rights abuses and are granted full and unfettered access for deliveries of humanitarian assistance, even as other negotiations with Assad’s regime may continue.”

The resolution is one of several efforts bubbling up in Congress to address the crisis as the Syrian uprising approaches its third anniversary next week.

The resolution, which was first obtained by Al-Monitor, calls on the UN to “suspend the Government of Syria’s rights and privileges of membership by the General Assembly until such time as the Assad regime has ceased attacks upon civilians, and granted free and unfettered access for deliveries of humanitarian assistance throughout the territory of Syria.”

And it gives the Barack Obama administration 60 days to “develop and submit to Congress” a “strategy for United States engagement on the Syria crisis, with a specific focus on humanitarian assistance and development, and protecting human rights inside Syria and in the region.”

While then-Secretary of State Hillary Clinton declared as far back as July 2011 that Assad had “lost legitimacy” as Syria’s ruler, the United States still recognized him as such. And when Obama recognized the Syrian Opposition Coalition in December 2012 as the “legitimate representative of the Syrian people in opposition to the Assad regime,” the administration made it clear that was a not a legal recognition.

"I think what you'll see is a political decision to morally boost them and provide more political and moral support for their efforts,” an administration official told CNN at the time. "But again, I think you're going to see a political recognition, not a legal recognition."

The Obama administration does not yet seem to be considering such a step, and the proposed resolution, even if passed, would not be binding.

Withdrawing recognition would complicate and perhaps mean the collapse of whatever hope remains for international and regional diplomacy to resolve the Syria crisis, such as the Geneva talks, and cooperation on the elimination of the country’s chemical weapons stockpile, UN Security Council Resolution 2118, which passed unanimously last year.

The Security Council also adopted a unanimous resolution last month demanding that Assad and the opposition allow the distribution of aid across the country.

Royce and Engel appeared to acknowledge the potential impact of withdrawing recognition for Assad, stating in their resolution their hope that “other negotiations with Assad’s regime may continue.”

The resolution comes one day after Sens. Tim Kaine, D-Va., and Marco Rubio, R-Fla., introduced their own resolution calling on the president to present a humanitarian aid strategy for Syria within 90 days.

It also follows UN special envoy Lakhdar Brahimi’s briefing to the UN Security Council on Thursday and the General Assembly on Friday on his mediation efforts.