The US is moving ahead with new sanctions on Russia, despite needing the Kremlin’s cooperation on a host of Middle East issues. 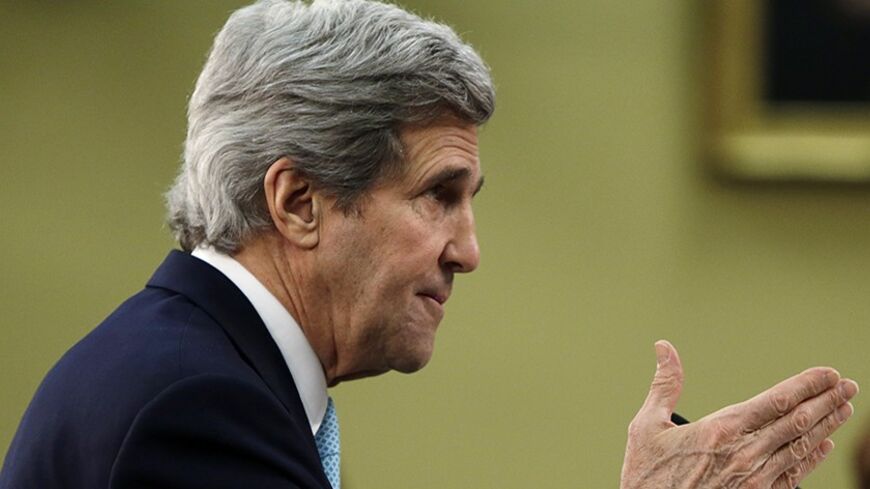 US Secretary of State John Kerry appears before the House Appropriations Committee on Capitol Hill in Washington, March 12, 2014. - REUTERS/Gary Cameron

The Senate Foreign Relations panel voted 14-3 on Wednesday on a $1 billion line of credit for Ukraine’s broke interim government.

The legislation also calls for targeted sanctions against Russians involved in violence and human rights abuses in Ukraine, as well as those complicit in corruption in the country.

Senators of both parties told Al-Monitor that the sanctions are tailored to deal with Russia’s intervention in Crimea and should not preclude cooperation on Iran, Syria or other issues.

“That’s why we narrowed it to Ukraine involvement only,” said Sen. Bob Corker, R-Tenn., the top Republican on the panel and a co-author of the bill. “It ties the two together in an appropriate way.”

The bill faces an uncertain fate after Senate Democrats pushed reforms to the International Monetary Fund (IMF) that Secretary of State John Kerry testified Wednesday were vital to getting Ukraine back on firm financial footing. Three senators — James Risch, R-Idaho, John Barrasso, R-Wyo., and Rand Paul, R-Ky., — voted against the bill in committee and panel Chairman Robert Menendez, D-N.J., all but ruled out a floor vote before lawmakers leave for recess at the end of the week.

“I would hope that we would do it before the recess, but probably the first order of business when we return,” Menendez told reporters after the markup.

The bill would then have to be reconciled with the House aid package, which is limited to the $1 billion loan guarantee and passed on a 385-23 vote last week. House Speaker John Boehner, R-Ohio, said Wednesday the Senate should abandon its IMF push and pass the House bill, and House Armed Services Committee Chairman Buck McKeon, R-Calif., vowed to “strongly oppose” the Senate bill if it comes to the House floor because the IMF provision’s $315 million price tag is paid for in part from military accounts.

The White House and Congress are determined to send Russia a strong signal that its effort to undermine the new pro-Western Ukrainian government is unacceptable despite acknowledging that the United States has little leverage. Further complicating things, Russia is a partner on several top US priorities in the Middle East.

Russia is a member of the group of six nations negotiating a nuclear deal with Iran and has sided with the United States on creating the international sanctions regime that the Obama administration says forced Iran to the negotiating table.

And in Syria, while Russia has been Assad’s main arms supplier and has stymied US-backed sanctions at the UN Security Council, Kerry and Foreign Minister Sergey Lavrov have cooperated on a joint agreement to get Assad to turn over his chemical weapons arsenal.

Risch, the No. 2 Republican on the Senate Foreign Relations panel, acknowledged that angering the Russians was a concern.

“The law of unintended consequences is always of concern to me,” Risch told Al-Monitor. “Of course. You’re always concerned about it. But having said that, you also have to do what’s right.

“Generally speaking, sanctions … can be a slap on the wrist, which the countries can work around,” Risch said. “Both we and the Russians have a strong interest in curbing terrorist activities. We have worked together in the past [on the Boston bombing for example] and I suspect that even with the sanctions those things are going to continue.”

Likewise, he said, Russia is likely to continue its efforts to rid Syria of its chemical weapons stockpile.

“The Russians aren’t anxious to have chemical weapons floating around, because the same people that get ahold of those could use them against us or against them in a terrorist capacity. We have a common interest in that regard. And those agencies — not withstanding sanctions — would probably continue to work together.”

“I think Russia is participating in the chemical weapons [effort] in Syria not because they want to be our friends or be nice guys; it’s in their interests,” said Sen. Angus King, I-Maine, a member of the Armed Services and Intelligence panels. “That’s why countries usually do things.”

Sen. Lindsey Graham, R-S.C., a hawkish member of the Senate Armed Services Committee, said the United States must press forward. “I am more concerned about their bad behavior than I am losing what good will they have toward us,” Graham said.

Sen. Chris Murphy, D-Conn., the chairman of the Foreign Relations subcommittee on Europe, said Russia has “taken it for granted” that the United States and Europe will “stand down” and that it was vital to draw a “line in the sand” over Crimea.

“This is so important that we shouldn’t worry about any potential pique that they will have regarding other issues here,” Murphy said. “They don’t work with us on issues like Iran and Syria because they’re doing us a favor; they work with us because it’s in their interest.

“This is an alliance of interests,” Murphy said. “Our interests are clearly completely divergent in Ukraine, and a tough sanctions bill I don’t believe will pollute the other negotiations because Russia’s interests won’t change.”

Some experts say a tough response could actually strengthen the US position in the Middle East.

“I think in the region it’s very much being seen as a test of wills and a test of President Obama’s resolve,” former Middle East peace envoy Dennis Ross told an NewsHour/Al-Monitor “Trendlines" special on Ukraine and the Middle East on Wednesday. “There’s a perception in many parts of the Middle East that there’s been a shift in the balance of power against the interest of America’s friends, and they haven’t seen from the standpoint of the region, the kind of American activism in the face of that that they would have liked to have seen.”

Ross, who was Iran adviser to former Secretary of State Hillary Clinton, said Russia is all but certain to “try to demonstrate to us that there’s some consequence for us” if the US stands up to the Kremlin’s intervention in Crimea. But he said Russia’s hands are largely tied.

“They may want to show that there’s a penalty in that we pay a price, but they’re not part of the [Iran nuclear talks] as a favor to the United States,” he said. “The possibility of Iran becoming a nuclear weapons state … is not something that has a high degree of attractiveness to the Russians.”

Fiona Hill, a former Russia official at the National Intelligence Council, agreed. “They do want to show that there are consequences if the US needs Russia on all of these instances that we’re talking about,” she said on NewsHour/Al-Monitor “Trendlines." “But they also have to calibrate that because they’re not always in the driving seat.”