Other Republicans support moving the Ukraine bill as quickly as possible without Iran sanctions. 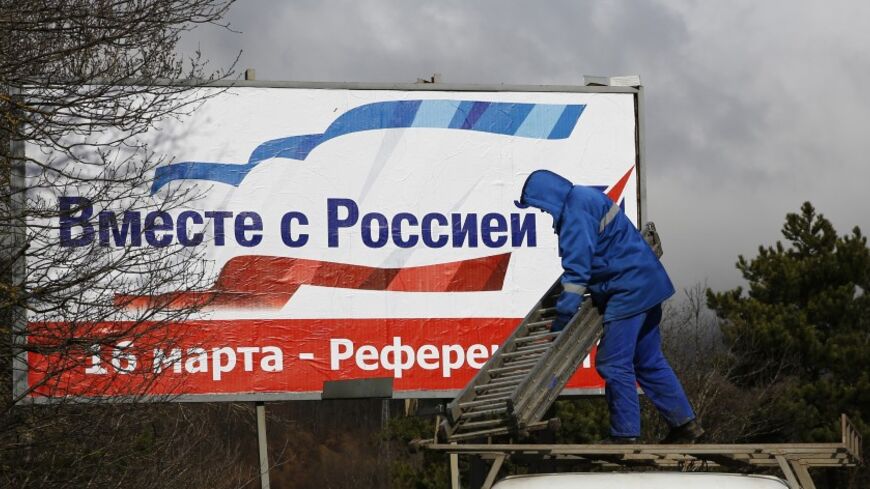 A man puts up a poster calling on Crimea residents to vote in favor of Crimea joining the Russian Federation, at a highway outside of Simferopol, March 11, 2014. The poster reads, "Together with Russia. March 16 — referendum." - REUTERS/Thomas Peter

Senate Republicans are divided over whether to push Iran sanctions as part of a pending financial aid package for Ukraine.

A number of hawkish members argue that Republicans should latch on to every legislative vehicle that hits the floor to force Democrats to publicly debate and vote on the sanctions measure. Senate Majority Leader Harry Reid, D-Nev., is preventing a vote on the stand-alone bill, infuriating Republicans.

Others, however, are urging a quick vote on a $1 billion line of credit to Ukraine to help the fledgling interim government stave off fiscal calamity. They say helping Ukraine stand up to Russia should be the top priority.

“I would do anything we can do to get Iran sanctions, so I would say almost every vehicle that’s out there should include that,” Sen. James Inhofe, R-Okla., the top Republican on the Senate Armed Services panel, told Al-Monitor. “I think it’s a good idea. The discussion [among Republicans] is going on right now.”

Others agree — in theory.

“I’ve tried to attach sanctions to every bill; yes, it does make sense,” said Sen. James Risch, R-Idaho, the No. 2 Republican on the Senate Foreign Relations panel.

Still, he worried about the possibility of derailing aid to Ukraine by forcing an unrelated issue.

Some of the most hawkish Republicans are the most adamant it’s a terrible idea.

“I want to get it done,” said Sen. John McCain, R-Ariz., the second-most senior Republican on the Armed Services panel. “If somebody has IMF, Iran sanctions or anything else as a higher priority, then they’ve got their priorities badly skewed.”

Sen. Lindsey Graham, R-S.C., who has taken the lead in pushing for a vote, agreed. “I don’t want to give anybody a reason not to support the Ukraine … bill,” he said.

Graham said he wants a vote quickly in part to protest Crimea’s March 16 referendum to leave Ukraine and join with Russia, which he called a “sham election.”

“We need to let [Russian President Vladimir] Putin know there’s consequences,” he said. “The sooner we can get this done, the better.”

Last month, Republicans tried to force a vote on an Iran sanctions amendment to veterans’ benefits legislation. Democrats were unable to break the GOP filibuster: The final tally was 56-41, with Republicans Dean Heller of Nevada and Jerry Moran of Kansas voting to proceed to the bill from Sen. Bernie Sanders, I-Vt.

Complicating the issue this time around, the Senate has struggled to put together an aid package for Ukraine, raising concerns that it won’t have time to act before leaving for a weeklong recess on Friday.

The House easily passed a line of credit on a 385-23 vote on March 6, but the Senate Foreign Relations panel had to delay a markup on Tuesday because it’s still putting a broader bill together. Panel Chairman Robert Menendez, D-N.J., told reporters the bill would include the Obama administration’s request for a $63 billion shift in US funds to the International Monetary Fund and could be marked up as early as Wednesday [March 12].

The money would reportedly come from funds set aside for the war in Afghanistan. Several members — including Risch — have warned against adding the IMF provision.

The sanctions bill, which was co-authored by Menendez and Sen. Mark Kirk, R-Ill., would slap tough new sanctions on Iran if the country fails to abide by the terms of the interim deal signed in November. It also sets congressional demands for a final deal, notably the requirement that Iran be prohibited from enriching uranium — a condition Iran says is a non-starter.

America’s main pro-Israel lobby, the American Israel Public Affairs Committee (AIPAC), has been lobbying for passage of the sanctions bill. AIPAC has backed off pushing an immediate vote as the issue has become more partisan ahead of the 2014 midterms, however.