Congress inches closer to pulling US out of Yemen war 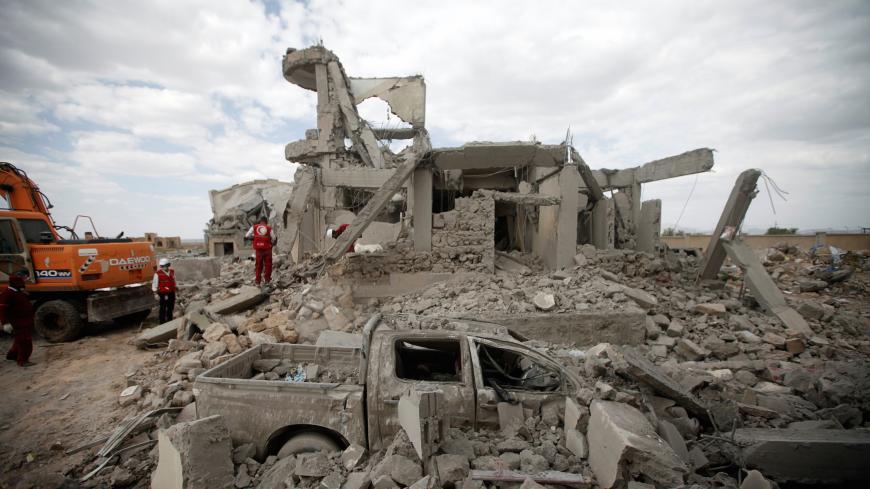 A destroyed car is seen between rubble as Red Crescent medics inspect the site of Saudi-led airstrikes on a Houthi detention center in Dhamar, Yemen, Sept. 1, 2019. - REUTERS/Mohamed al-Sayaghi

The rapidly escalating fight between Yemen’s Saudi-supported government and the United Arab Emirates-backed southern separatists has renewed Congress’ determination to buck President Donald Trump and pull the United States out of the war.

Trump’s allies in the Republican-held Senate failed to stop Democrats from adding an amendment to curtail US support for the Saudi-led coalition against the Houthi rebels when the Appropriations Committee advanced its annual defense spending bill 16-15 today.

The amendment, introduced by Sen. Chris Murphy, D-Conn., prohibits the Trump administration from using taxpayer dollars to support the anti-Houthi campaign until Defense Secretary Mark Esper certifies that the Saudis and Emiratis have ceased transferring US weapons to their Yemeni proxies.

While the UAE has largely withdrawn from the anti-Houthi campaign, the Emiratis continue to support the southern secessionists, who have recently ousted Yemeni government forces from the provisional capital of Aden.

CNN reported earlier this year that the Saudis and Emiratis transferred US arms to hard-line Salafi militias, including al-Qaeda-linked fighters. The arms in question include Mine-Resistant Ambush Protected (MRAP) vehicles, which were part of a $2.5 billion sale to the UAE in 2014. The Houthi rebels have captured some MRAPs, and the CNN report has prompted an inquiry from presidential candidate Sen. Elizabeth Warren, D-Mass., a member of the Armed Services Committee.

The Appropriations Committee adopted the amendment by voice vote despite objections from some Republican hawks, including Appropriations Chairman Richard Shelby, R-Ala., and Sen. James Lankford, R-Okla., who voiced concern over how long the Defense Department certification could take.

But they could not muster enough support to halt the Murphy amendment because other Republicans on the panel, including fellow Iran hawk Sen. Lindsey Graham, R-S.C., have previously endorsed efforts to end US support for the coalition. Graham chairs the foreign aid appropriations panel, which has yet to release its spending bill.

“We have some things we’re working on right now,” said Leahy. “Saudi Arabia gets too much of a free ride from everything, especially this administration. But I’m more encouraged than I was a few years ago on all that.”

Two Republicans on the foreign aid panel — Sens. Jerry Moran of Kansas and Steve Daines of Montana — both sided with Democrats in March to pass a resolution 54-46 ending US support for the Saudi coalition.

Trump ultimately vetoed the resolution, introduced by presidential candidate Sen. Bernie Sanders, I-Vt. But House Democrats have attached the Sanders resolution to their version of the defense spending bill, which passed 226-203 in July.

The White House disputes the underlying legal premise of the Sanders bill. But Rep. Ro Khanna, D-Calif., has also succeeded in passing an amendment to the House’s annual defense authorization bill that would bar the Trump administration from using federal funds to support the Saudi-led coalition.

The House passed its defense authorization bill 220-197 in July, setting up a showdown with Senate Armed Services Committee Chairman James Inhofe, R-Okla., who forestalled similar measures in the upper chamber’s version of the bill, which passed 86-8 in June.

Sanders and Khanna led a bipartisan group of 17 lawmakers, including Murphy, Leahy, Warren and fellow 2020 contender Sen. Kamala Harris, D-Calif., in an August letter to Inhofe asking him to keep the language in the defense bill.

And another Democratic presidential candidate — Sen. Cory Booker of New Jersey — joined Murphy, Moran and five other senators in a letter to Crown Prince Mohammed bin Salman asking Riyadh to disburse $750 million in humanitarian aid for Yemen, which it has pledged but not yet delivered.

Correction: Sept. 13, 2019. An earlier version of this article stated that Sen. Tom Cotton had voiced concern over how long Defense Department certification could take; rather Sen. James Lankford voiced these concerns.