Presidential candidate Bernie Sanders is warning Donald Trump that he does not have the legal authority to strike Iran. 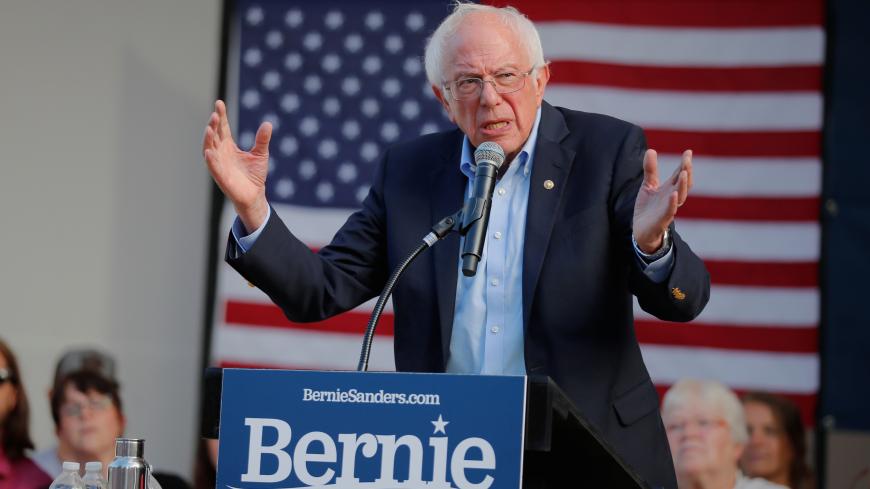 The attack on the Saudi Aramco oil facility over the weekend and President Donald Trump’s subsequent tweet that the United States is “locked and loaded” immediately prompted presidential candidate Sen. Bernie Sanders, I-Vt., to fire back.

Sanders and other progressive lawmakers stressed that Trump does not have the legal authority from Congress to launch an offensive strike against Iran.

“Mr. Trump, the Constitution of the United States is perfectly clear,” Sanders tweeted. “Only Congress — not the President — can declare war. And Congress will not give you the authority to start another disastrous war in the Middle East just because the brutal Saudi dictatorship told you to.”

And in an interview on ABC on Sunday, hours before Trump’s tweet, Mayor Pete Buttigieg of South Bend, Indiana — another 2020 contender — criticized Trump’s maximum pressure strategy against Iran.

“There is more than enough destabilizing the Middle East and the Persian Gulf without fears that a president could destabilize it further with the next tweet,” said Buttigieg. “We need to make sure right now that we create options to prevent things from escalating further.”

Trump noted that he was “waiting to hear from the kingdom as to who they believe was the cause of the attack” before proceeding.

Yemen’s Iran-backed Houthi rebels have claimed responsibility for the attack, which occurred some 620 miles from the war-torn country. But US Secretary of State Mike Pompeo said over the weekend that there was no evidence the attack came from Yemen and the Trump administration maintains that the attacks came directly from Iran.

Saudi Arabia said today that Riyadh has not reached the same conclusion that Iran was the staging ground for the attacks. Still, the Saudis did claim that the drones that struck the oil facility were Iranian and did not originate from Yemen. Iran denies the charges and no side has presented evidence to corroborate their competing claims.

And Trump implied that Iran was telling “a very big lie” in a separate tweet today. The president referenced an incident earlier this year when Tehran shot down a US drone after claiming it was flying over Iranian air space even as Washington placed the drone’s coordinates over international waters.

Senate Foreign Relations Committee member Chris Murphy, D-Conn., tweeted that “no matter where this latest drone strike was launched from, there is no short or long-term upside to the US military getting more deeply involved in the growing regional contest between the Saudis and Iranians,” going on to lambast Trump’s maximum pressure campaign against Tehran.

But not all Democrats were as eager to push back against Trump’s tweets.

Murphy’s colleague on the Foreign Relations Committee, Sen. Chris Coons, D-Del., struck a more hawkish message in an appearance today on the pro-Trump "Fox and Friends," where guests frequently go to directly relay messages to the president. Coons argued that “this may very well be the thing that calls for military action against Iran if that’s what the intelligence supports.”

“The only body that can call for offensive military action against Iran is Congress,” tweeted Khanna.

The California Democrat used Coons’ remarks to renew calls for lawmakers to pass his legislation barring the Trump administration from using funds in an offensive strike against Iran absent congressional authorization.

Khanna and Trump ally Rep. Matt Gaetz, R-Fla., teamed up to include the legislation as an amendment to the annual defense authorization bill, which the House passed 220-197 in July. But Senate Armed Services Committee Chairman James Inhofe, R-Okla., an Iran hawk, forestalled Democrats from adding similar language to the upper chamber’s version of the bill.

The Gaetz-Inhofe split illustrates the national security fissure between the non-interventionist and hawkish wings of the Republican Party as Trump’s allies continue to vie for his ear on national security issues.

“It is now time for the US to put on the table an attack on Iranian oil refineries if they continue their provocations or increase nuclear enrichment,” tweeted Sen. Lindsey Graham, R-S.C., another close Trump confidant. “Iran will not stop their misbehavior until the consequences become more real, like attacking their refineries, which will break the regime’s back.”

Yet Sen. Rand Paul, R-Ky., who also enjoys close access to Trump, pushed back against Graham on CNN, opting instead to focus on the Houthis’ claim of credit for the attack.

“Really the answer is trying to have a negotiated cease-fire and peace in Yemen, and bombing Iran won’t do that,” said Paul. “Iran’s military spending is about $17 billion. Saudi Arabia spends about $83 billion.”