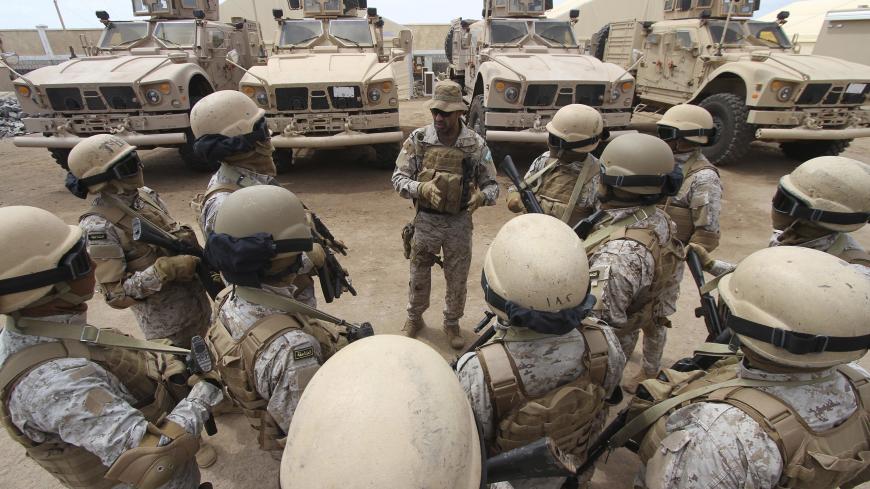 Col. Abdullah al-Sahian (C), who commands the Saudi forces in Yemen's southern port city of Aden, talks to his soldiers in their base in Aden, Sept. 28, 2015. - REUTERS/Faisal Al Nasser

Congress’ efforts to constrain President Donald Trump’s activities in Iran and the Persian Gulf have stalled as Democrats and Republicans struggle to agree upon final defense authorization and spending legislation before the end of the year.

While the partisan gridlock largely centers around an agreement to fund Trump’s proposed US-Mexico border wall, several provisions on Iran, Saudi Arabia, Yemen and Iraq have thrown further wrenches into the process. The numerous stumbling blocks have raised doubts as to whether Congress can even coalesce around final legislation this year.

House Armed Services Committee Chairman Adam Smith, D-Wash., is currently negotiating with the White House and the Republican-held Senate to reach a compromise defense bill. Domestic issues aside, he has still not breached the gaping fissure between House and Senate leadership over Middle East war powers, arms sales and sanctions authorities.

The provision in the House bill would ban Trump from undertaking offensive military action against Iran absent congressional authorization. The House included the Iran language to the defense bill, which passed 220-197 in July after the Senate rejected the same provision 50-40 in June.

Smith noted that he asked Rep. Matt Gaetz, R-Fla., an ardent Trump supporter who co-sponsored the Iran war powers bill, to convince the president to back the legislation. Still, previous outreach from Gaetz and progressive Democrats did little to change Trump’s support for the Saudi-led coalition in Yemen.

After Congress failed to muster the votes to override Trump’s veto of a resolution intended to end support for the Saudi coalition, Smith and Rep. Ro Khanna, D-Calif., added language that would ban US funding for Riyadh’s war efforts to the House defense bill.

That bill would also prevent funding to process and license arms sales for Saudi Arabia and the United Arab Emirates. Additionally, it would ban Saudi officials — and potentially Crown Prince Mohammed bin Salman — from entering the United States if the intelligence community finds that they were complicit in the murder of journalist Jamal Khashoggi.

Although the Saudi sanctions legislation overwhelmingly passed the House 405-7 in July, Smith told Al-Monitor that many of the Saudi and Yemen provisions were still “contentious” issues for Senate Republicans.

Khanna, who sits on the conference committee for the defense bill, noted last month that he was more “optimistic” that the Yemen language would remain in a final legislation, “given an emerging coalition … in the House and Senate that shares the concerns of the Saudi action.” Nonetheless, he voiced concerns over Senate efforts “to water down” the language on the Yemen war.

“We cannot water down the part about taking away funding, otherwise the language doesn’t have the teeth it needs,” Khanna told Al-Monitor.

But Republican appropriators have proven more open to cracking down on the Yemen war — and some even sided with Sen. Chris Murphy, D-Conn., to pass similar language 16-15 in the defense spending bill. Specifically, the Senate’s defense spending bill would end US funding for Riyadh’s Yemen offensive unless Saudi Arabia and the UAE stop transferring US arms to their proxies in the war-torn country. The House spending bill also directs Trump to end US hostilities in Yemen.

Finally, House appropriators have added language to their spending bill that would repeal the 2001 military authorization that serves as the legal basis for counterterrorism operations throughout the region. Rep. Barbara Lee, D-Calif., has sought to pass the provision for several years. She argues that the repeal would take place after eight months, forcing Congress to finally debate updating the 18-year-old authorization that has expanded to cover myriad terrorist groups across the globe beyond al-Qaeda.

But if Congress fails to negotiate a compromise, all these provisions could quickly become moot.

“I will grant you that the House wants to assert itself a little bit more forcefully than the Senate,” said Smith. “But I don’t accept that the fall-back position is to assert ourselves not at all.” 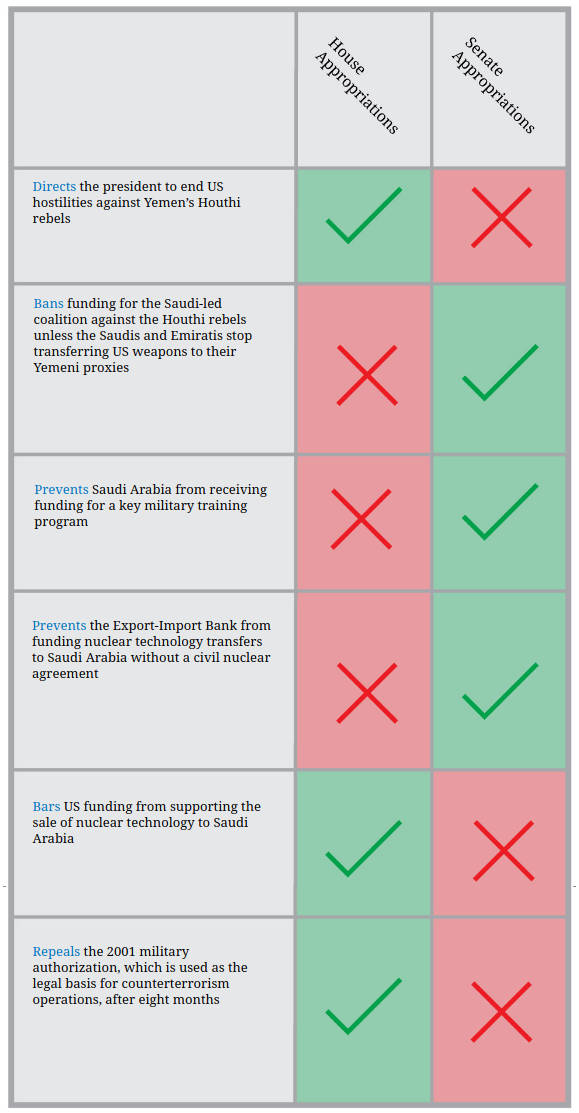