A far-reaching overhaul underway in Turkey’s educational system indicates that the government uses education as a tool to shape conservative and pious students. 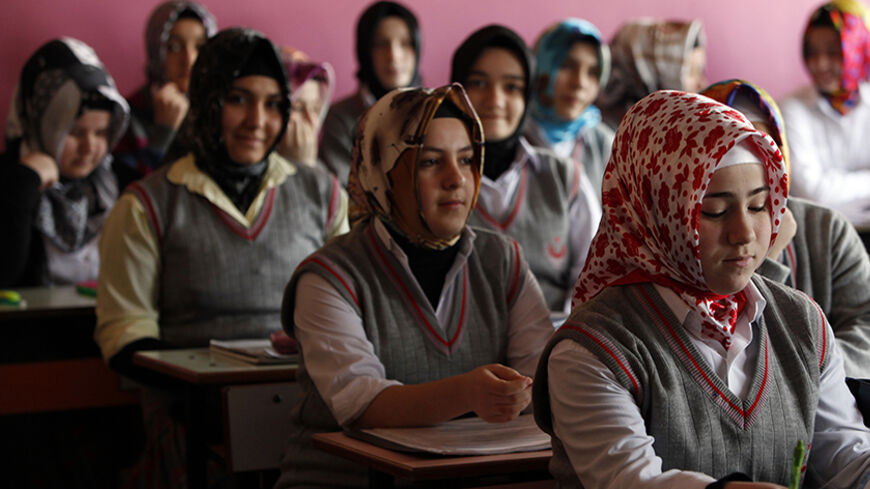 When a friend first voiced concerns over changes in Turkey’s educational system a couple of years ago, I didn’t take it very seriously. My friend, who had a son in primary school, argued that the changes were all aimed at installing a religious education. In 2012, the government introduced a 12-year, compulsory education system with four-year phases of primary, secondary and high school, replacing the old system where compulsory education consisted of five years of primary and three years of secondary school. My friend argued that the overhaul was designed to subject children to religious education at an earlier age. I thought he was exaggerating and being paranoid. But two years on, looking at the combined effect of developments since then, I see that my friend’s concerns were not paranoia, but an early warning.

The new school system — widely known as the “4+4+4 system” — might have seemed to have nothing to do with religion at first glance, but one of its main motivations appears to have been the opening of secondary sections in the imam-hatip (vocational schools to educate imams and preachers) schools, which offer full-fledged Islamic education. Those schools were previously limited to high-school level. Today, children can be enrolled in an imam-hatip school right after they complete four years of primary education. As their names suggest, the schools’ purpose is to train Muslim clergy. Yet, many students with no intention of becoming imams are sent to those schools by pious, conservative parents eager to give their offspring a sound religious education. Thus, the government’s introduction of secondary sections in the religious schools might be seen as a public service intended for families seeking better religious education for their children.

However, other fundamental changes the government enacted this year transformed the religious schools from a selective option to a central institution in the education system.

In the old system, students would sit exams only for admission in certain private colleges and vocational schools, while enrollment in a “regular” secondary or high school would be conditioned only on the number of vacancies a given school had. Today, the “regular” schools are being eradicated from the education system. School admissions will be determined through a centralized exam held by the Education Ministry. Students will have to choose from alternatives such as vocational, multi-program or private schools and get certain scores at the exam to win admission. Those who are unwilling to sit for the exam or fail to score the points required for the school of their choice will be left with only one option: the imam-hatip schools. That is, under the new system the government installed, the religious schools are the only one to admit students without an exam. An interesting coincidence, isn’t it?

The rising prominence of the imam-hatip religious schools is not the only factor increasing the weight of religion in the education system. Religion classes, a compulsory subject in the curriculum since the 1980 military coup, are also a contributing factor. Those classes were supposed to be removed from the curriculum under a judgment the European Court of Human Rights passed in 2007 in a case filed by an Alevi Turkish citizen, Hasan Zengin, and his daughter Eylem. The court ruled that imposing the Sunni faith on an Alevi family’s child through those classes violated freedom of religion.

Following the judgment, the government renamed the classes “religious culture and ethics” and said that, in line with the European court’s ruling, general knowledge about all religions had been added to the curriculum to transform the classes from an exclusive teaching of Sunni Islam to an impartial subject.

Yet, experts familiar with the issue maintain that the essence of the classes remains unchanged and that Sunni Islam continues to be imposed, with students required to memorize Islamic prayers and Quranic verses.

In theory, parents are entitled to have their children exempt from those classes. In practice, however, this seems to be no easy task. Education Minister Nabi Avci’s written reply to a parliamentary question on the issue indicates that courts routinely reject the complaints of parents who fail to persuade schools to grant their children exemption. From 2000 to 2014, 13 applications were lodged at administrative courts on behalf of students denied exemption from religion classes, and all of them were rejected.

Moreover, it appears that even students who manage to get exemption are still subjected to compulsory religion classes through other courses they are forced to choose. According to the Radikal daily, for instance, the daughter of Ahmet Guvener, the pastor of the Diyarbakir Protestant Church, was exempt from the compulsory religious culture and ethics classes, but was forced to take a “selective” religion course. The school system required students to take at least one selective course to complete a certain credit score. However, it offered only three selective subjects: basic religious knowledge, Quran studies and the life of Prophet Muhammad. When the pastor raised objections to the limited options, he was duly told he was free to enroll his daughter in another school.

The conservative Justice and Development Party’s attempts to reshape the educational realm does not end there. The teachers’ union Egitim-Sen argues that a new regulation, under which school principals will be selected on the basis of oral exams, is designed to ensure that all schools are headed by individuals who share the government’s political convictions.

In addition, a draft law currently on parliament’s agenda suggests that the government is poised for a major move to place universities under its control as well. If the bill is passed, even the administrators of foundation universities, which are private enterprises, would be appointed by the government-controlled Higher Education Board. It would mean that private universities, founded with multimillion-dollar investments, would be deprived even of the right to choose their own management and would virtually cease to be “private” institutions.

Not long after my conversation with the friend I mentioned above, Prime Minister Recep Tayyip Erdogan declared that he wanted to raise a “pious generation.” At that point, my friend’s conviction that the education reforms had to do with religion began to make sense. Today, judging by the combination of steps the government has taken, I understand that it sees education as a tool to shape a certain profile of people.

Turkey had spent decades striving to raise the “Kemalist” generations to which its secularist founder Mustafa Kemal Ataturk aspired. Today, the state and education systems are being redesigned to raise “pious generations.” In sum, the malady of imposing a certain worldview and religion on its citizens continues to plague the Turkish state.