As the popularity of religious vocational schools increases, the ban on the enrollment of imam-hatip graduates into military schools is being questioned. 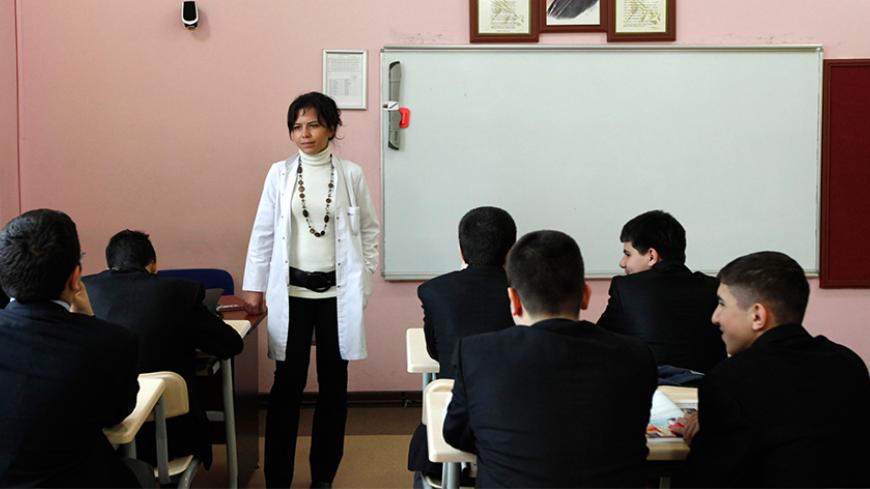 A teacher stands in front of a class of male students at the Beyoglu Anadolu Imam-Hatip School in Istanbul, Feb. 8, 2010. - REUTERS/Murad Sezer

Turkey's imam-hatip schools are vocational schools that educate state-employed imams and preachers. These schools offer primary school graduates the traditional secondary school curriculum in addition to vocational courses related to Islamic theology. The Justice and Development Party (AKP) government has been working hard to increase the number of imam-hatip schools. Over the past 13 years, the number of these schools went up from 450 in 2003 to 940 today, and the number of students rose from 70,000 to more than 500,000 in the same period.

The activities of the imam-hatip schools have been receiving more extensive coverage of late. President Recep Tayyip Erdogan, who is an imam-hatip graduate along with his children, called these schools, "The hope of Turkey and the entire Muslim nation."

Imam-hatip graduates can go to any university they want and become a police officer, doctor, lawyer, engineer or bureaucrat. But there is only one career that is off-limits to these students: the military. Military training regulations stipulate that imam-hatip graduates are not allowed to enroll in military academies to train as officers and noncommissioned officers.

In fact, the military academies that train officers for the Turkish Armed Forces (TSK) do not accept graduates of the imam-hatip schools, or any technical or medical schools.

The pro-AKP media, however, has undertaken an intensive campaign to promote the enrollment of imam-hatip graduates in vocational schools that train noncommissioned officers.

According to pro-AKP commentators, the current ban is illegal and reminiscent of the military era; many Turks believe this discriminatory policy has to be terminated.

The latest incident took place about a month ago, when imam-hatip graduates who passed the initial entry exams of the Gendarmerie Noncommissioned Vocational School were not allowed to take the advanced exam in health and physical education.

One student told pro-AKP daily Yeni Akit that he was not allowed to take the advanced exams. "Because I'm an imam-hatip graduate I cannot achieve my lifelong dream of becoming a noncommissioned officer. They didn't allow me take the advanced exams although I passed the written tests. If they were not going to allow me to take the final exams, then why did they allow me to sit for the written tests? Imam-hatip graduates can become president of the republic but not noncommissioned officers in the TSK. We want an end to this secularist discrimination," he said.

Ecevit Oksuz, chairman of Turkey's Imam Hatip Graduates Foundation, told Al-Monitor, "Not allowing imam-hatip graduates into military schools is an ugly heritage from a foregone era. The enrollment in the military of our children who are imam-hatip graduates will strengthen our army. Just as the students of other schools are children of this nation, so are the students of imam-hatip schools whose parents are dignified members of this country. Just as our graduates could serve as judges, deputies, prosecutors, prime ministers and even presidents, they should also be able to serve as captains, majors and generals."

But TSK's upper echelons still maintain their firm opposition to accept imam-hatip graduates. In 2012, when Vatan newspaper published an article with the headline "Imam-hatip officers are coming," the TSK chief of general staff issued a denial within minutes. Behind this rigid stance is the concern that enrolling imam-hatip graduates in military schools would be perceived as a major blow to the perception that the military is the defender of secularism in Turkey, as well as pave the way to spread religion in the TSK ranks.

On the other hand, the TSK has softened its firm stand on headscarves and now accepts women wearing a headscarf to enter military institutions.

The question now raised is why the TSK cannot ease its ban on the enrollment of imam-hatip graduates in the military, at least for noncommissioned officers. The pro-AKP media appears to be pursuing this stance, which eventually could put political pressure on the TSK.

How much longer can the TSK maintain its position on defending secularism? The answer lies in Turkey's focus on the current security issues related to the Syrian crisis, the increasing clashes with the Kurdistan Workers Party and the Islamic State and the public perceptions of close relations between the TSK, Erdogan and the AKP bureaucracy in general. There are those who fear that allowing imam-hatip graduates to enter military schools could force the TSK to make a choice between this close cooperation and secularism.

The question whether the TSK high command still continues to treat secular principles as vital or whether it will at least ease the restrictions on imam-hatip graduates' entry into the vocational schools that train noncommissioned officers for the sake of preserving good relations with the government may seem like a technicality. But in Turkey this is actually a question related to the future of the country. As long as the ban continues, for many it reflects the persisting sensitivity of the TSK to issues of secularism; rescinding the ban means the erosion of this sensitivity.

It will be interesting to see how the TSK command will navigate this minefield.