The Turkish government has suddenly moved to abolish a grueling standardized high school entrance exam without offering any plan to replace it. 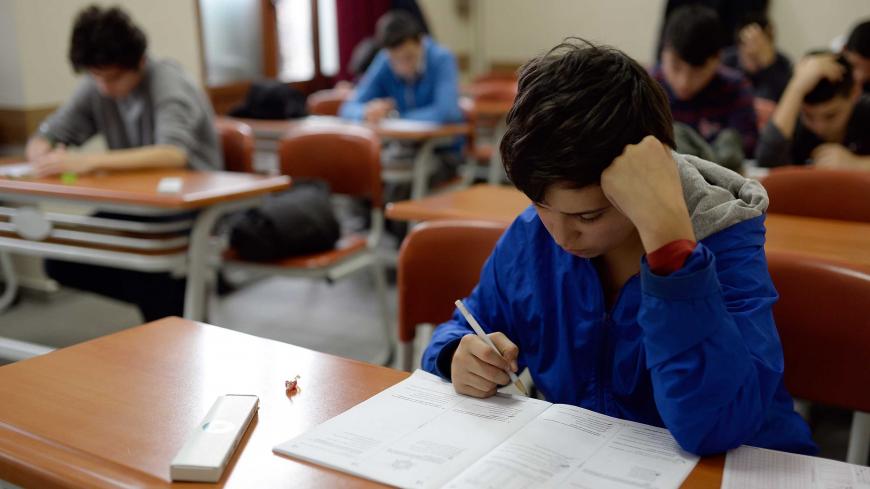 The demise of a grueling entrance exam might normally be cause for students to celebrate. But a sudden decision by the Turkish government this week to abolish the standardized test for high school admission has roused concerns children will be sent to religious institutions against their parents’ wishes.

Turkey will no longer implement the Transition from Primary to Secondary Education (TEOG) examination because it treats students like “racehorses,” Education Minister Ismet Yilmaz said on Sept. 19, just one day into the new school year.

The announcement followed President Recep Tayyip Erdogan’s surprise remarks that he wanted the TEOG gone. The rapid response by the Education Ministry underscores the sway Turkey’s leader holds over the minutia of domestic policy. Erdogan later went further, signaling that the university entrance exam may also be abolished.

Yilmaz did not offer an alternative plan, urging parents to “trust us" and saying, "Our aim is to carry Turkey into the 21st century.”

The lack of clarity has plunged Turks into confusion. Parents complain that the educational system has been revamped five times in 15 years under six different ministers, impacting scholastic quality.

The Organization for Economic Cooperation and Development’s most recent assessment of 15-year-olds showed Turkey had dropped to 49th out of 72 countries from 44th in 2012. Nearly a third of Turkish students underperfomed in mathematics, science and reading.

The Education Ministry has already faced a backlash over a new curriculum that removes evolution and introduces the concept of jihad. Observers also say textbooks offer sexist views on family life and give short shrift to Mustafa Kemal Ataturk, the founder of the secular republic.

The opposition Republican People’s Party holds that ending the TEOG is intended to push half of the students into theological institutions, called “imam-hatip” in Turkish, which ostensibly train religious clerics. The number of imam-hatip schools in Turkey jumped 73% between 2010 and 2014.

The ruling Justice and Development Party's overhaul of the system in 2012 that effectively created middle schools lifted imam-hatip enrollment to 10% of all students in 2014 from 3% in 2002 as more religious schools opened to fill the void, according to Education Ministry data.

That reform also ushered in the TEOG for secondary schools except vocational institutions, which include imam-hatip schools. The move has helped funnel students into religious schools when their test results failed to earn them a spot at a general high school.

Critics say encouraging more religiosity among the youth is part of an overarching mission by the ruling party, which developed from an Islamist movement, to erode Turkey’s secular constitution.

The government has said it is meeting public demand by opening more religious schools, in which girls and boys study in separate classes and most girls cover their hair. Erdogan, himself an imam-hatip graduate, has vowed to raise “a religious generation.”

“I contend that the prime minister, the education minister were caught unaware when the president said the TEOG would be ended,” People’s Democratic Party lawmaker Ahmet Yildirim said, according to an emailed statement.

Yildirim alleged that the president’s 36-year-old son, Bilal Erdogan, is setting education policy as a “parallel minister.” A Harvard University graduate, the younger Erdogan is not officially part of the administration but sits on the board of an education foundation and is widely thought to champion imam-hatip schools.

The TEOG, the cause for much sweat and tears, is by no means popular. Nearly 1.3 million children sit for the test every year, competing for fewer than 400,000 slots in public high schools.

Experts concur that the TEOG should be phased out, but they argue the real problem is a shortage of quality schools to educate a huge young population. Nearly a quarter of Turkey’s 80 million people are under the age of 15.

High-achieving schools, like Istanbul’s 536-year-old Galatasaray Lycee, may now have to instate their own entrance exams.

In the meantime, students are left pondering their fate. One 13-year-old girl who hopes to become a doctor said she has spent the last two years studying for the TEOG, skipping summer vacations and spending limited funds on preparatory books and courses. She told a newspaper, “This feels like an injustice.”