The latest changes in Turkey’s education system have resulted in chaos and comedy, with many students placed in remote schools and non-Muslim pupils assigned to schools training imams. 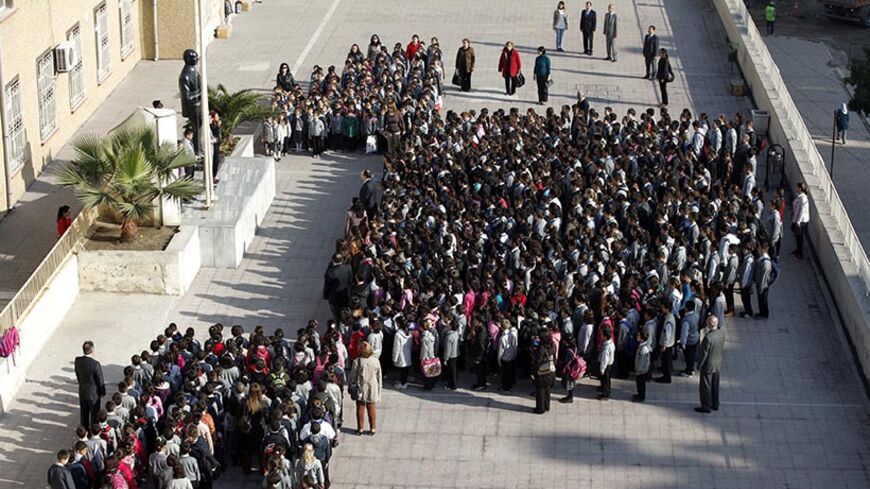 Turkish children sing the national anthem before their lesson at a school in Hatay, April 2, 2012. - REUTERS/Osman Orsal

The new school year in Turkey is scheduled to start on Sept. 15, and is already mired in chaos and controversy.

Since it came to power 12 years ago, the Justice and Development Party (AKP) has had five education ministers, with each rearranging the schooling system in their own way and coming up with the most controversial projects in the ministry’s 94-year history. Some have been accused of entertaining ideological motives and seeking to create backyards for the AKP, while others were slammed as tokens.

Yet, none of them has been as controversial as current Minister of Education Nabi Avci, who introduced the Transition from Elementary to Secondary Education (TEOG) system, which determines the high schools students attend after 8th grade and involves a nationwide exam. The system, which took effect this year, outraged both students and parents as thousands of pupils landed in schools dozens of miles away from home. And much to the amusement of Christian parents, a number of Christian students ended up in imam-hatip schools, which teach the Quran and train Muslim clergy. And while the public awaited an explanation from the Ministry of Education, a new scandal followed: The grandson of Turkey’s chief Rabbi Ishak Haleva was also placed in an imam-hatip school, in the district of Sile outside Istanbul.

Even before the TEOG results were announced last month, speculation was rife that the exam had been designed to promote the imam-hatip schools and lay the ground for a shift to a religious education system. The ministry statistics, revealed in the wake of the exam results, confirmed that students were placed in schools they did not wish to attend, namely the imam-hatip schools whose number has kept growing in recent years.

The ministry statement said that, out of the 1,291,851 students who sat for the exam, 1,136,546 submitted papers listing the schools they wish to attend based on their exam scores, while 134,000 pupils did not fill in the school preference forms.

According to Dilek Akagun Yilmaz, a lawmaker from the main opposition Republican People’s Party (CHP), the ministry placed 40,000 students who had not filled out the forms in imam-hatip schools against their will, while deliberately closing down regular high schools. “The constitutional principle that religious education is subject to the students’ and parents’ consent has been eradicated. A process is underway to convert all schools to imam-hatip schools, using religious exploitation,” the lawmaker said. “[Provincial] education directors have issued circulars demanding that bright students be canalized to imam-hatip high schools. Students and headmasters are under pressure. In Hakkari, even the regional school built by the [secularist] Association for Supporting Contemporary Life has been closed down and converted to an imam-hatip school. They are seeking to raise vengeful, docile and religious generations.”

Zuhal Topcu, deputy chairwoman of the opposition Nationalist Action Party (MHP), joined the outcry: “The education system is in complete chaos. The system has collapsed. The minister should acknowledge he has messed up and step down. There is no place for trial-and-error methods in education.”

In another major malfunction of the TEOG invention, 9,802 students have landed in schools outside the districts of their residence. Popular Turkish journalist Fatih Altayli, whose daughter shared the same fate, decried the “placement comedy” in his column: “My daughter, too, had the misfortune to be of an age that caught her in the TEOG scandal. We were told a few weeks ago that students who had not filled in school preference forms would be placed automatically in the school nearest to their home. I started teasing my daughter: ‘Since you didn’t submit a school preference form, they will now put you in the imam-hatip school in our neighborhood.’ And, lo and behold, my joke came true on Sunday. There was one difference, though. The school was not in our neighborhood. Not even in our vicinity. Not even in our district. Not even in a neighboring district. And not even on the same bank [of the Bosporus] where we live in Istanbul. I wonder if it even falls within the boundaries of Istanbul province. TEOG has sent our girl to a school in Sile, an imam-hatip school. After I got the news, I calculated the distance on Google Maps: 94.5 kilometers [58.7 miles] from our home. Barring any traffic jams, the journey takes no less than an hour and 32 minutes. In the meantime, readers, too, have showered us with complaints. I came to the office yesterday to learn that Naci from the graphics desk has broken my record. The Ministry of Education has put his child in a school 125 kilometers [77.7 miles] away. If they fail to resolve this affair, we’d better brace for some real motion in Istanbul’s traffic.”

Minister sees 'a bit of trouble'

As TEOG faltered and scandals broke one after another, Avci finally made a statement: “I’m asking parents not to panic. New contingents are being added to public schools. I know we gave them a bit of trouble, but the system is getting on track.”

The minister is aware of the problems befalling students and parents, but is the system really getting on track? Did any new project ever get on track as ministers kept changing? Never.

The AKP’s longest-serving education minister and another controversial “reformer,” Huseyin Celik, saw his grand project — the Level Evaluation Exam (SBS) — abolished by his successor, Nimet Cubukcu. Omer Dincer, who replaced Cubukcu and managed to retain his post for a year and a half, lowered the school starting-age to five, a project that parents protested with pacifiers. Even then-Prime Minister Recep Tayyip Erdogan could not resist the outcry and dismissed Dincer, one of his closest confidants and former undersecretary.

Turkish parents have now launched a campaign titled “Hands off my child.” Social media is awash with the desperate stories of frustrated families.

Education experts warn that the frequent changes in the schooling system could lead to irrevocable consequences. Nehir Sert, associate professor at Ankara’s Baskent University, told Al-Monitor, “Changing one element in the education system requires a comprehensive approach, based on scientific methods, that takes up all components of the system as a whole. It is a time-consuming and arduous process that does not allow for quick fixes. The current practice needs to be analyzed in depth, using the models and approaches of the 'program assessment' discipline. That’s the only way to correctly diagnose and resolve the outstanding problems. For instance, the reasons that prompted the abolition of the SBS system were not discussed on related platforms. And the TEOG system was introduced with no scientific evidence to justify it, which is against the [norms of] contemporary program development and assessment.”

Statistical data support Sert’s assertion that quick changes in the education system fail to produce positive results. The slew of new arrangements introduced by successive ministers has produced this outcome: Since 2000, Turkey has kept vacillating between 42nd and 44th place among 65 countries on the education quality ranking of the Organization for Economic Cooperation and Development.

With Turkish schoolchildren turned into guinea pigs, Avci’s TEOG invention, too, appears doomed to survive only until the next minister takes office.