Despite Ankara’s unrelenting drive to expand religious education, enrollment in religious schools has remained below the government’s targets. 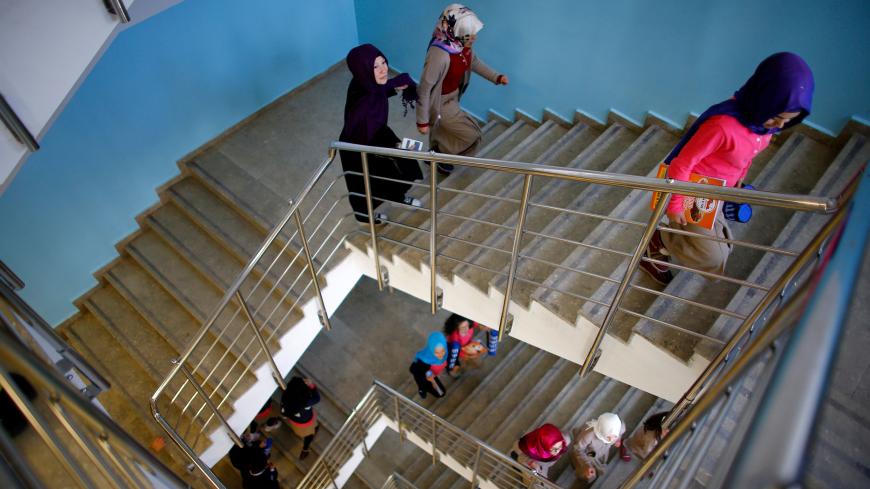 Students of Tevfik Ileri Imam Hatip religious school climb flights of stairs as they leave their classrooms for a break in Ankara, Turkey, Nov. 18, 2014. - REUTERS/Umit Bektas

The vast expansion of religious schools in Turkey — one of the hallmarks of the Justice and Development Party’s (AKP) 16-year rule — has become another point of ideological polarization in a deeply divided society. The public imam hatip schools — which offer extensive Quranic studies — are growing into a dominant element in the education system. But popular objection to their expansion is also growing.

According to Education Ministry figures, some 627,000 students are currently enrolled in 1,605 imam hatip high schools across the country. The ministry’s investment plans envisage a continued expansion of the schools, but whether this means a growing demand is an open question. Ministry statistics might give an idea.

According to Education Minister Ziya Selcuk, people have embraced imam hatip schools because “the state introduces truthfully the sources of Islam to students,” hence the increase in enrollment.

But not everyone agrees with this explanation. According to Feray Aytekin Aydogan, head of the Education and Science Laborers Trade Union, the AKP has reshaped the education system in a way that pushes students into imam hatip high schools. Referring to an annual nationwide exam that determines where middle-school graduates go on to study, she said that pupils who fail to enter language, science or vocational high schools “are left with no other option but to enroll in imam hatip schools” while “the well-off go to private high schools.”

According to Ministry of National Education statistics — which have made recent headlines — enrollment in the religious schools remains below Ankara’s target. The Education Ministry had allocated a 224,950-strong contingent for new imam hatip enrollments this year, but only 117,662 pupils actually enrolled. The rate suggests that despite the overall increase over the years, the appeal of the schools remains far from what the government desires.

Aydogan said that parents concerned about their children's professional and economic futures were steering away from imam hatip schools and turning to regular academic education. None of the imam hatip high schools managed to fill up its contingent in last year’s exam, she noted.

According to press reports last week, several imam hatip schools in the provinces of Batman, Bursa, Kocaeli and Sanliurfa were closed down due to lack of students. The pro-government press countered that the schools were not shut down but moved to new buildings.

This controversy aside, an open struggle is underway against Education Ministry moves to convert an array of existing high schools to imam hatip schools.

A case in point is the Ismail Tarman School in Istanbul’s Besiktas district, a secular stronghold. Parents have been holding protests outside the school since 2016, when a decision was made to convert the school into an imam hatip school. Upon the petition of parents, an Istanbul court suspended the decision, but the ruling was not implemented on the ground. The parents protested outside the school again on March 4.

Yildirim Kaya, deputy chair of the main opposition Republican People’s Party in charge of education policies, joined the protest in support of the parents. In remarks to Al-Monitor, Kaya argued that the underlying motivation in transforming the school was to erode the secular fabric of the area. “There are 13 other imam hatip schools in a 2-kilometer (1-mile) diameter around the school they want to transform. Only two regular schools are left in the area,” he said. “What could be the logic behind this desire to convert those schools to imam hatip schools? The only logic here is a desire to conservatize the area. There is no need for an imam hatip school, and they are acting on the basis of political motivations rather than educational needs.”

Parents in other corners of the country have been waging similar struggles against the conversion of existing schools to imam hatip schools. In converted schools, only a small number of students who do not want to stay can generally get a transfer to other schools, with some forced to opt for private schools. For Kaya, this amounts to “punishing those who oppose the conservative education policies.”

Not only the quantity but also the quality of imam hatip schools is a subject of debate. According to a 2018 activity report by the Education Ministry’s strategy development department, the year-end grade average of students in secondary education was 76 on the scale of 100, while the imam hatip average stood at 65.9, coupled with a notable absenteeism rate.

The government, however, continues to invest in these religious schools. The Education Ministry’s investment program for 2019 includes plans to open 162 new imam hatip high schools, with a budget of 460 million Turkish liras ($84.1 million) allocated for the purpose.

For Aydogan, the drive is not sustainable. “We did a survey last year and took a picture of Turkey on this issue,” she said. “We saw that parents concerned about the future of their children take a stance in favor of academic education, no matter how they vote in elections.”