Millions of students in Turkey have been effectively left out of remote learning by a lack of resources. 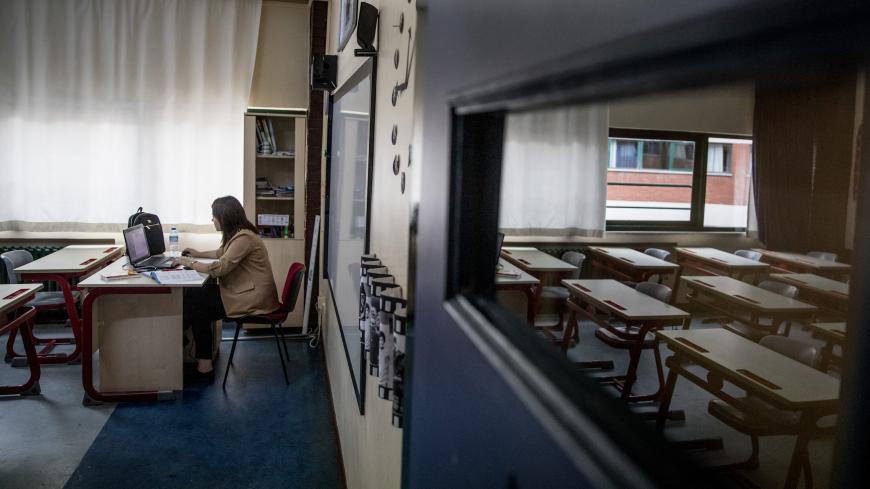 More than 30% of Turkey’s K-12 students are at risk of falling behind in their education due to a lack of resources and infrastructural difficulties while public primary and secondary education in the country relies heavily on remote learning. Many parents who consider the spring semester a lost term are hopeless about fall semester as well.

Turkey has expanded in-person education for primary and secondary school students on Monday, with second, third, fourth, eighth and 12th graders going back to school on a rotation basis. Still, millions of students are dependent on remote education as part of efforts to curb the spread of the novel coronavirus. In the seven months since the closure of the schools in March, the government seems to have failed to take necessary steps to secure education for those who don't have the means and resources to access online and remote learning, particularly in low-income neighborhoods and rural areas where even electricity can sometimes be a problem, let alone internet or television access.

The fall semester got off to a bad start in late September, when the online educational portal known as EBA collapsed in the first week of the online courses. Though the government said the crash was due to a cyber attack, many observers argued that the real reason was the high traffic. Aside from infrastructure failures, opposition parties and civic groups also say millions of students have effectively been left out of education by high internet fees or a lack of televisions, computers and internet access.

According to a recent report by Turkey’s main opposition Republican People's Party (CHP), some four million students could not access the remote learning system due to a lack of resources in the first week of the fall semester. While 3.5 million students have been having difficulty accessing the internet, some 750,000 do not even have televisions in their houses.

Feray Aytekin Aydogan is the head of Egitim Sen, Turkey's Education and Science Laborers Trade Union. He told Al-Monitor in September that some six million students do not have necessary resources to access remote learning, meaning that more than 30% of the total 18 million K-12 students are at risk of effectively being left out of formal education. The government’s efforts to meet the needs of the low-income households have achieved little since the schools were closed in mid-March after the first COVID-19 cases were officially confirmed in Turkey.

According to Aydogan, the government should have already identified the students who do not have access to remote learning and provided them with the necessary supplies in the past seven months.

The Education Ministry turned thousands of classrooms into online learning centers in rural areas where internet service is poor or lacking and announced in early September that it would distribute some 500,000 tablets for students in need, but these efforts have fallen short of solving the problems.

The CHP and civic groups have called on the government to expand services in rural areas and low-income neighborhoods by allocating a public contingency fund created in 2005 to expand internet access across the country, but the pleas seem to have fallen on deaf ears.

There have even been deaths as Turks have tried to resolve the problems for themselves. An eight-year-old student fell from the roof of his apartment building in Istanbul while trying to help his father install a line to their house to access online courses. A 50-year-old teacher died from a heart attack in southern Turkey while climbing a hill to get a better signal for his online courses.

Civic groups also believe that the Education Ministry’s decision to resume in-person education was premature due to public schools’ limited capacity to take the necessary measures to prevent the spread of the virus. Infection rates among teachers have been rising since classes resumed. According to Egitim Sen’s figures, some 600 teachers are currently in treatment for COVID-19.

The CHP says most of the public schools have failed to take basic steps. “No measures have been taken except masks and disinfectants. There is no social distancing, no cleaning or personnel to do that cleaning,” Yildirim Kaya, deputy chair of the CHP, told Al-Monitor, recounting his Oct 12. visit to an Ankara school that is only three miles away from the Turkish Parliament.

According to Ilknur Kaya, the head of the Students and Parents Association, some schools have asked parents to supply sanitizing products. “The parents were asked for money for sanitizing products. Those who didn’t pay were threatened with denial of admission,” Kaya told Al-Monitor. “In low income neighborhoods parents were asked to supply it: bleach for enrollment,” Kaya added.

Some municipalities, especially metropolitan municipalities under CHP administration, offered facilities for use as alternative classrooms and some 500,000 unemployed teachers say that they were ready to work. The government ignored both offers.

For now, primary, secondary and high school students are attending in-person education two days in a week on rotation. Schools remain closed on the third day for disinfection.

Meanwhile, many have accused the Education Ministry of placing the responsibility on parents’ shoulders by keeping classroom attendance optional.

“[Parents] who don’t have televisions or more than one television, computers, internet connections and who have to work and no one to leave their kid with send their kid to school,” Kaya told Al-Monitor.

Better-off families who have televisions, computers, internet access or childcare, meanwhile, can continue remote learning. “You are being dragged into a process in which the ones who have money can keep their kids safe; the ones who don’t cannot,” Kaya said.

The situation is worse in some provinces. Sadrettin Kaya, the head of the Egitim Sen’s Diyarbakir branch, said masks and disinfectants supplied for the schools are far from adequate as the number of students per classroom reaches 40 in many schools, including in the central neighborhoods of the pre-dominantly Kurdish province.

“Three packs of masks cannot be a solution to anything. Social distancing is out of question as students have to sit in pairs,” Kaya told Al-Monitor, adding that in some areas the number of students per classroom rises to 55 or 60.

Aydogan pointed out that there are students who have been left out completely during the pandemic. They include the children of seasonal agricultural workers, refugees and students whose mother tongue is not Turkish.