Iran is working out the kinks in its distance-learning process, which it launched on the fly when the coronavirus struck. 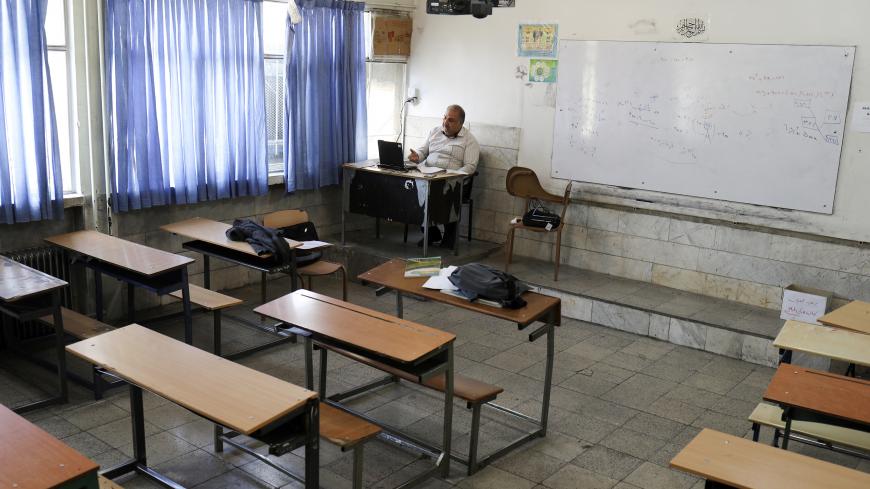 A teacher is seen while teaching online school classes to students at their homes, as schools are still closed, following the outbreak of the coronavirus disease (COVID-19), in Tehran, Iran, April 15, 2020. - WANA (West Asia News Agency)/Ali Khara via REUTERS

In response to Iran’s coronavirus outbreak in late February, one of the government’s first actions was to close schools and universities on March 5, leaving the education of millions of students in limbo. The prolonged shutdown has led to major challenges for students, parents and teachers.

Mahta is a fifth-grade student in Tehran who is trying to continue her education despite the challenges brought by the pandemic. “I’ve missed my school and my friends. Studying in school with my friends and along with my teacher was much better than studying online,” the 11-year-old told Al-Monitor.

With many instructors using popular messaging platforms such as WhatsApp and Telegram to communicate with their students, Mahta explained her experience with the methodology, which is new to millions of Iranian students.

“Our teacher shares recordings of herself explaining new lessons and assigns us daily homework, but unlike the teachings that were done in school, these are not done according to a specific plan,” she said.

Mahta talked about learning additional course material from her parents. “Learning from mom and dad is a bit harder because the teaching methodology is different from what we’re used to in school,” she said, pointing out that it’s also harder to concentrate on studying while at home.

These new challenges aren’t limited to students. Mahta’s mother, Fahimeh, described her hurdles over the past month and a half. “One is dealing with the difficulties of using local mobile apps that don’t have the features of their foreign rivals like WhatsApp and Telegram, and the other one is the added free time the kids have nowadays at home because of the coronavirus,” she told Al-Monitor.

To minimize the effect of the school closures on the education system, Iran’s Education Ministry introduced an online app, the Social Network of Students (Shad in Persian), and presents daily lessons for different grades on state TV. The Ministry of Information and Communications Technology ordered companies that provide home internet access to increase network speed fourfold. The government also prepared self-study packages and delivered them to students living in areas with poor communications services or those completely cut off from service.

The locally designed app can serve as many as 16 million students, including those with physical impairments, but its official launch was delayed to ensure security after recent incidents in which information of millions of Iranians was leaked.

Despite all efforts by the government, signs of the country’s unpreparedness for a complete shift to distance learning are visible, and raise alarms that digital gaps in parts of the country might further reduce the chances of equal opportunity for all Iranian pupils.

“We’ve been asked to install some specific apps so my daughter can continue her education,” Fahimeh said. She said that even in Tehran, not all children have smartphones. Some have to use their parents’ mobile devices to access course material.

“I know that even some parents don’t have smartphones. With the economic situation, which has even turned worse because of the coronavirus, many families can’t afford to buy a smartphone,” she added.

Many teachers have complained that current online teaching methods lack the interaction they used to have with students at school, which they said has decreased the quality of education.

The issue of “educational justice” has always been a topic of debate in Iran. Many Iranian students — mostly in less-developed areas — continue to study under harsh and sometimes dangerous environments, which on occasion has led to fatal incidents. With the high dependency of distance learning on digital technologies, some people have voiced concerns that, given some students’ lack of access to the internet and digital devices, focusing on online learning might further deprive many students of quality education.

Education Minister Mohsen Hajimirzaei recently tweeted that 6.9% of students (about 870,000 people) do not have access to the internet.

However, according to a March report by Iran’s Telecommunications Ministry, only 70% of Iranian families have internet access. The same report adds that access rates vary from one province to another. For instance, in the southeastern province of Sistan and Baluchestan — one of Iran’s least-developed regions — more than 53% of its 2.9 million residents don’t have internet access.

To learn more about the challenges of implementing distance learning, Al-Monitor contacted Saeed Yaghmouri, an academic affairs expert in Iran. Yaghmouri said some good work has been done to advance the process.

“The main factor that had until now stopped its full implementation is the central concept of in-person education in Iran. In our education system, distance learning is seen as a complementary tool to enhance education and training, not as a replacement,” he told Al-Monitor.

According to him, cultural factors and Iranian society’s willingness or reluctance to accept the “sudden switch from in-class education to online education” play important roles in how people perceive the quality of distance learning.

Yaghmouri, a co-founder of Iranian educational startup Classgram, a class management tool for primary-grade students, sees the coronavirus pandemic as a “big test” for the country’s educational system. He urged education officials to end their “monopolistic view,” explaining that distance learning won’t succeed “as long as the ministry continues to be both a decision-maker and implementer.”

“The ministry’s launching of the exclusive system [Shad] — which it wants millions of Iranian students to use — is a clear indication that it is continuing its old policy of keeping full control over the education system,” he said.

Meanwhile, schools will be closed until at least April 19, and students like Mahta have to continue studying at home.

“I’ve missed my friends and teacher a lot. I want to go back to school again, but I also understand that we have to stay home for now to be safe,” she told Al-Monitor.

More than 78,000 people have been diagnosed with the coronavirus in Iran. With 22,000 active cases and more than 4,900 deaths as of April 16, schools could remain closed indefinitely. 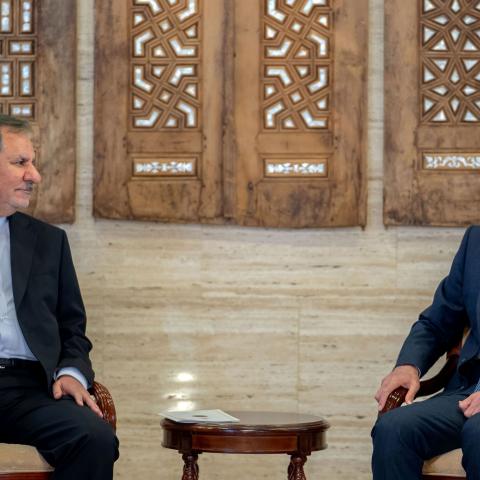 Race for reconstruction heats up as Syrian war winds down