The opposition-led government in Syria has activated distance learning for students in the areas under its control to help curb the spread of the coronavirus in schools and universities, though some students aren't able to benefit from the program. 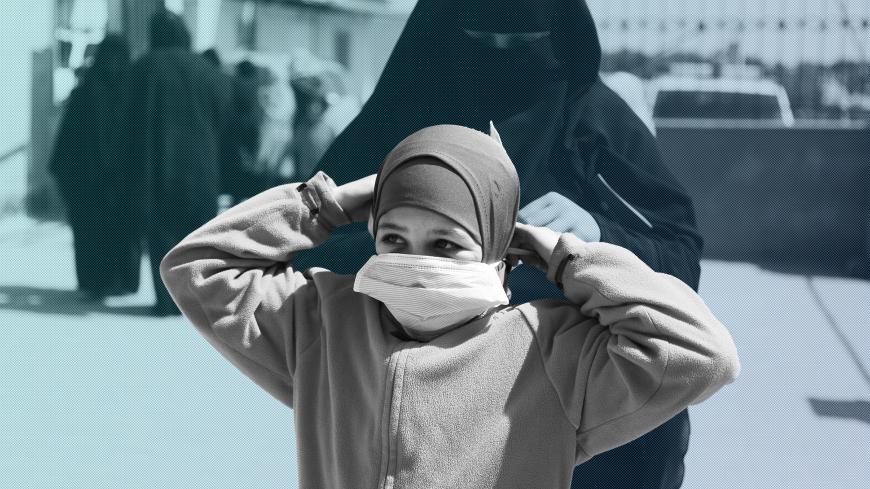 A Syrian woman sets a protective mask on a child's face after a lecture provided by staff from Turkey's Humanitarian Relief Foundation to raise awareness about the novel coronavirus epidemic at a camp for the displaced, Kafr Lusin, Syria, March 23, 2020. - AAREF WATAD/AFP via Getty Images

ALEPPO, Syria — In an effort to contain the spread of the coronavirus, the Syrian opposition-led interim government has authorized the use of distance learning at all levels of education until further notice.

The Ministry of Education in a March 29 statement gave educational institution leaders the go-ahead to activate virtual learning. Though the ministry didn't mention any specific plan, it gave the people in charge the leeway to choose the most appropriate learning method. Educational institutions have been closed since March 14 because of the virus.

“Such a dangerous epidemic will have disastrous consequences if it reaches the towns, cities and camps in northwest Syria, which are filled with displaced people. That's why it was absolutely necessary to close the schools preemptively,” Education Minister Huda al-Absi told Al-Monitor.

“We started working on the distance learning program March 29, and gave the executive officers at the ministry’s directorates and universities the freedom to opt for a method deemed easy and appropriate.”

The "Digital School" program, which seems to be the preferred option, has been launched in many opposition-held areas. It consists of an electronic platform involving 3,000 lessons based on the modified Syrian curriculum, which the ministry approved.

"Digital School seems to be a good e-learning platform for intermediate and secondary schools. It's an important option we suggested to the education directorates in opposition-held areas. Such a platform can ensure that the students continue to learn from home. Yet Digital School is not mandatory for the students for many reasons, most notably that many of them lack access to the internet, computers and mobile phones," Absi said.

“The ministry will be working to boost cooperation with Digital School, to adopt it as an e-learning platform and facilitate access to its content. That could be achieved by broadcasting the lessons and lectures on a TV station, for instance."

Osman Hajawi, dean of the pharmacy program at the University of Aleppo, noted how easily COVID-19 could have spread among schools teeming with students.

“The educational centers in Aleppo countryside were filled with students," he told Al-Monitor. "Subsequently, they could seriously have increased the spread of the coronavirus, which poses a threat to the lives of students and teaching staff. That's why it was decided to close them.”

"The Syrians have faced many challenges, notably that the learning process was interrupted by Syrian regime forces targeting the schools, and the country’s instability. The urgent need for education led to creation of Digital School, which can help during this epidemic and in other times as well, given the [general] circumstances under which the Syrians live in the opposition-held areas.”

Ali Bakkour, an eighth-grade student in northern Aleppo province, told Al-Monitor, “Distance learning is comfortable, and the lessons the Digital School gives are very useful. I'm able to understand the daily lessons and do the homework.”

Bakkour, who started using the online lessons April 1, said, “I am following two lectures per day and doing the homework after making sure that I understand the lesson. I can repeat the lesson when anything is unclear.”

Some teachers in the opposition-held areas use other distance-learning methods. Ahmed Abu Hamza, for example, opened a WhatsApp channel to follow up on his students’ learning process after the schools closed. He told Al-Monitor, "E-learning requires having the appropriate means and applications. There is an internet problem in opposition-held areas, and the children do not have their own devices. Also, the parents seem to have concerns about this new experiment.”

Ahmad al-Ali, a math teacher in northern Aleppo, told Al-Monitor, “Digital School is a tool to explain the curriculum. It can’t, however, test the students. Based on that, it can't be an alternative for regular schools.”

Abu al-Alaa al-Halabi, a news correspondent for Enab Baladi, told Al-Monitor, “E-learning requires that the students or families have in hand digital devices with a fast internet connection. But this isn't the case in northern Syria, as many families can't afford to provide such things to their children in light of the hard living conditions.”

It seems that for now the distance learning experience will remain limited in northwestern Syria, where a large number of displaced and poor people are crammed into camps without proper network access or equipment. Meanwhile, the opposition-led Education Ministry doesn't have the ability to remedy the situation.