Analysts believe the problem of public education can’t be solved through monetary means alone, but rather with reforms to the entire educational system. 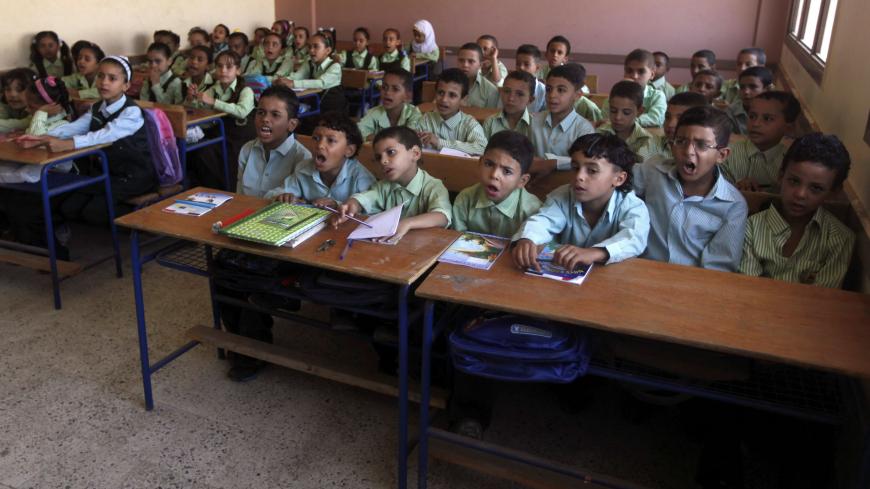 Students attend a class on the first day of their new school year at a government school in Giza, south of Cairo, Egypt, Sept. 22, 2013. - REUTERS/Mohamed Abd El Ghany

CAIRO — Classrooms that have more than 60 children, teachers who beat students and bathrooms that are rarely cleaned are part of the daily school experience for Mariam, a third-grade student in Cairo.

“We will get beaten if we don’t pay attention, if we are noisy or if we don’t do our homework,” Mariam, who goes to a public school in the extremely poor neighborhood of Manshiyet Nasr, told Al-Monitor.

Her sister, Sara, who is in fifth grade, said there are three students at each desk in all of her classes. “There are so many students,” she said.

For decades, Egypt’s public schools have been in a state of disrepair — class sizes with up to 100 students, crumbling infrastructure, poor student outcomes and badly trained and severely underpaid teachers are all the norm.

As such, families that can afford to pay for daily afternoon private tutoring do so, almost always using the same teachers from the school the children go to. For teachers, it’s also a necessity because of such poor wages, with the average salary at around $100 per month.

Because of class size, tutoring is often necessary because not much learning can be done in such conditions and students risk failure. The majority of high school students and a significant proportion of primary school students take private lessons.

Parents fork out hundreds if not thousands of pounds a month (it takes around 18 pounds to buy a dollar). It has been estimated that private lessons incur household expenditures totaling up to 1.6% of Egypt’s gross domestic product (GDP), which further disadvantages poor students.

According to a 2017-2018 World Economic Forum report, Egypt ranked 129th globally in terms of the quality of education.

According to a 2013 USAID report, one in five students in Egypt in grade 3 could not read a single word from a reading passage, 50% of students with five years of schooling were functionally illiterate and only 67% could do basic mathematics.

Ostensibly, Egypt is obliged to spend 4% of its annual GDP on education, as stipulated by its 2014 constitution, although critics have complained that the actual amount spent is lower.

Gamal Sheeha, the head of the parliamentary education committee, told a popular talk show host in April that the money being made available for the current education budget is lower than what is constitutionally acceptable.

One researcher at a leading private university in Egypt told Al-Monitor that the government has long tried to find ways around its spending obligations.

“Essentially, the problem is that the Ministry of Education and the government in general are trying to find ways, perhaps creative ways, to get around that obligation,” the researcher told Al-Monitor on condition of anonymity because of the sensitivity of the topic.

On April 21, the Egyptian government signed a deal with the World Bank to loan the country $500 million to reform the public school system.

The loan will go toward the Egyptian government’s efforts to expand access to “quality kindergarten” for 500,000 children, create 500,000 new teaching positions and make available over 1.5 million digital learning devices to educators and students. It would be carried out over a period of five years.

The loan is part of an overall $2 billion, with the rest of the money coming from the national budget and will take place over a period of 14 years, according to comments May 29 by Education Minister Tarek Shawki.

The current education system is shaped around extremely competitive exams taken at the end of the final year of high school, the Thanaweya Amma. These exams put extreme pressure on students to succeed, and they determine university entrance. The minister also said May 29 that the current examination period would be phased out by 2026.

Due to the pressure placed on students, the exams are often leaked ahead of time; this occurred again June 3.

The reform project by the government, if successful, would attempt to address many of the current problems and neglect. The plan would expand access to kindergarten, improve the exam system, enhance the capacity of teachers and provide modern technology for teachers and students.

“Our goal is to provide our students with the competencies they need to create a society that learns, thinks and innovates,” Shawki said at the time of the signing of the loan with the World Bank in Egypt on April 21.

However, there is skepticism about the government’s ability to carry out the project.

Ted Purinton, the former dean of the Graduate School of Education at the American University in Cairo, said that the minister possibly faces insurmountable challenges despite his repeated bold attempts at reform.

Referring to both Ministry of Education bureaucrats and teachers who would be tasked with implementing the practicalities of the reforms, he said that “10,000-12,000 people are going to have to be in the position of carrying out some of these things, and many of them are not even remotely aware of what the foundations are to do this successfully.”

The World Bank itself, at least implicitly, acknowledges the challenges of spending the money effectively: A risk assessment in the report outlining the spending objectives lists the loan as “high risk” overall.

Specific indicators, such as for political, governance and fiduciary (trust between the stakeholders), are also considered high risk.

Al-Monitor tried to contact the World Bank, but neither the country director nor a spokesperson was available for comment despite repeated attempts.

“This is not the first time we have had a loan from one of these financial institutions to improve education,” Ghousson Tewfik, a researcher at the Social Justice Platform, told Al-Monitor. “They are fixing the symptoms, but we are not considering how to take care of the failure of public education in Egypt.”

Little detail of the reforms has been made available to the public, Tewfik said. “No one has information, it’s all about press conferences, it’s all about talk shows,” she said.

Raed al-Husseini, the head of the Independent Teachers Union, told Al-Monitor that nothing would change unless teachers are paid more. “They can’t even look after their own children, and many of them work as drivers or serving shisha and don’t get enough sleep. How can you expect them to teach?”

“We would compete with each other so we didn’t get beaten,” Adham said.