How Egypt plans to build its next generation of scientists

While Egypt is investing in high schools specializing in STEM fields to promote innovation among future generations, the efforts will only pay off if higher educational institutions improve as well. 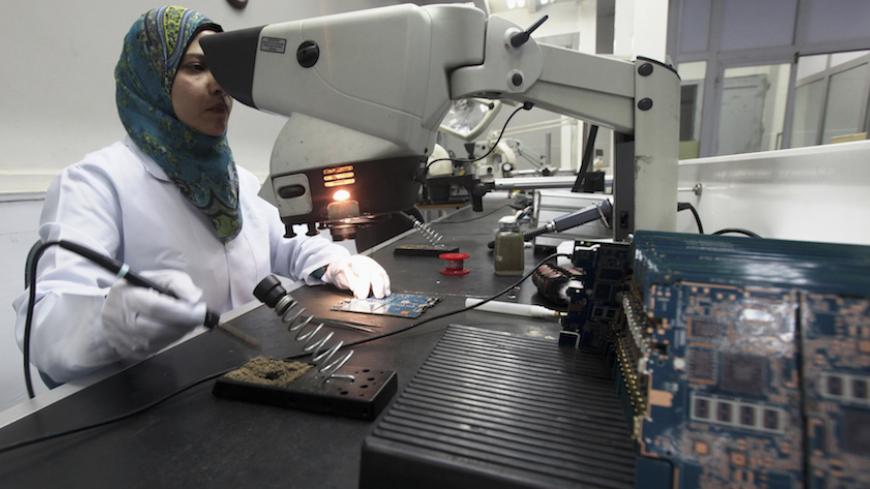 CAIRO — The educational system in Egypt is in a miserable state. In the World Economic Forum’s 2015-2016 Global Competitiveness Report, the country ranked 139th out of 140 countries in the “quality of the education system” index. The educational system has been criticized due to the rigidity of the curriculum, dependence on rote memorization instead of scientific research, classroom overcrowding, a lack of laboratories and a lack of competent faculty and staff. There is, however, some hope on the horizon for a better future for Egypt and Egyptians, namely STEM (science, technology, engineering and mathematics) schools.

These schools take in the country’s highest scoring students on the middle-school final exams after they also pass several admission tests. The curriculum is based on scientific research and requires students to complete one scientific project per semester. While Ministry of Education officials hope that these students would be Egypt’s future scientists, this project is colliding with the fact that no Egyptian university is at a high enough level for these students to attend after they graduate from the STEM schools.

Egyptian Minister of Education Al-Hilali Al-Sherbini told Al-Monitor, "So far we have established nine schools of this kind. The cost per school is 100 million Egyptian pounds ($11.3 million), even though each entering class has only about 150 students and each classroom has 25 students. This high cost is due to the sophisticated workshops, student housing and athletic fields. The ministry plans to have one such school in every province by 2018.”

Hilali explained that each of these schools is equipped with 12 sophisticated workshops, including workshops for electronics, chemistry, communications, biology, robotics and manufacturing. Regarding the tuition fees, Hilali said, "Students pay the schools a very small amount of about 3,000 pounds, including 2,000 pounds as a deposit for a laptop computer and only 1,000 pounds for tuition and housing for three years. Each student costs the Ministry of Education 30,000-40,000 pounds [$3,400-$4,500] a year.”

Hilali stressed that students who are admitted to these schools must have a grade of 98% for the middle-school certificate, must reach the final stage in two of three subjects — namely mathematics, science and English — and are subject to a number of intelligence and psychological tests as well as math and science tests to determine their academic ability.

The deputy head of the general secondary exams Mohammad Saad told Al-Monitor that the exam and assessment system in these schools is completely different from that of the public schools, whereby 60% of the grade is based on completing a scientific project that the student presents each semester, 30% on the course grades and 10% on discipline inside the school. Also, the curriculum is quite different from the general secondary curriculum.

Saad said that the ministry is responsible for helping these students come up with innovative ideas, and then others will care for them after graduation. Due to the ministry's role in caring for these students and providing them with better opportunities, cooperation procedures were established with the Military Technical Academy, the Marine Academy of Science and Technology and the Egypt-Japan University to supply these universities with students once they graduate.

The head of the public education sector, Dr. Reza Hejazi, told Al-Monitor that the teachers in these schools are selected from the highest educational and scientific levels through extensive tests in the subjects they teach. “They are also required to have computer and [foreign] language skills. Afterward, they are given courses by experts because these teachers are dealing with Egypt’s best students and must be better than the students they are teaching. Also, the student contributes to the educational process, and the teacher plays the role of a mentor. These schools do not use traditional educational methods. The teacher sets the topics and asks the students to go read the references. The student and teacher then discuss what was learned.”

Hejazi noted that these schools provide the students with all their scientific, educational, recreational and health needs. Their diets are set by specialists, and student housing is available.

While these schools provide students with many opportunities, challenges remain. The head of the Egypt School Students Union, Samir Abdul Aziz, told Al-Monitor that the problem facing students in such schools is after they graduate. “After having become accustomed to advanced learning systems, they must join Egyptian universities that still use traditional education methods that would kill creativity in these students and thus squander the millions of pounds spent on educating them. Thus, many gifted students are opting to go to foreign universities, and not benefiting their country.”

These schools are “thinking outside the box” to prepare a generation of scientists who would work to move Egypt out of its current state in all areas of life, but this requires that the Ministry of Higher Education complete what the Ministry of Education started and provide high-quality post-secondary education to these students.