Egypt, whose educational system is seen as widely lacking, is seeking to invigorate its school system by adopting aspects of the Japanese whole child educational model. 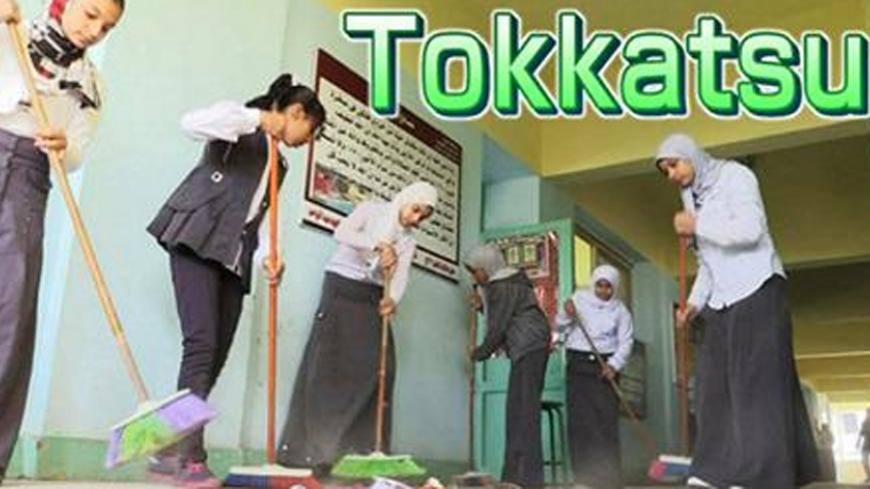 Some Egyptian schools are adopting Japan's Tokkatsu whole child educational model, which includes having students do cleanup duties. This photo from the Japan International Cooperation Agency Egypt office shows some of these practices at work. - Facebook/JICA-Egypt

Egypt is turning to the Japanese model in education to reform the school system, which has been suffering for years from government neglect.

The Egyptian Education Ministry said it had applied the Japanese “Tokubetsu Katsudo (Tokkatsu)” whole child education model in 12 Egyptian schools and would be applying the model in 100 others. The ministry also said it would establish 100 new Egyptian-Japanese schools, which will be completed in the coming academic year.

The Tokkatsu method is an essential component in the Japanese education curriculum, which seeks a balanced development of social, emotional, physical and academic aspects of children through various activities. The activities include cultural and sports events as well as interactive classroom discussion between teachers and children to promote active learning.

In Japanese elementary schools, students participate in special activities, including cleaning the classroom and being the class leader for a day (nitchoku).

In October 2015, the Egyptian Ministry of Education and the Japanese International Cooperation Agency introduced 10 activities on a trial basis in two elementary schools. These activities included washing hands, nitchoku, cleaning, a physical fitness test and a five-minute daily calculation drill.

Reda Hegazi, the head of the Education Department at the Education Ministry, said that Japan has a successful experience in education as the system fosters morals and discipline as well as boosts skills and activities. He said Egypt's application of the Japanese model does not mean that Egyptian curricula, especially in the humanities, will be discarded. “However, schools will be benefiting from teaching techniques used at Japanese schools, particularly in science and mathematics, as well as activities that develop skills and the spirit of teamwork,” he said.

According to the partnership, Egypt will use the Japanese education model Tokkatsu to develop school activities that address ethics, discipline and collaborative spirit among Egyptian students.

“The Japanese model creates a productive and attractive learning environment that boosts school discipline, supported by the latest technologies. It also has an assessment system that measures student understanding and critical thinking rather than memorization,” he told Al-Monitor.

The expert said that while the system pays special attention to developing the students’ character, their desirable attitudes and behavior, it also motivates them to learn and teaches them effective study habits. “The system also helps students learn subjects by themselves as well as depend on themselves to accomplish their daily duties,” Nour El Deen said.

Japan has one of the highest literacy rates in the world, with 100% enrollment in compulsory grades and zero illiteracy. While high school education is not compulsory, high school enrollment is over 96% all over Japan and nearly 100% in the cities. The high school dropout rate is about 2% and about 46% of all high school graduates go on to university or junior college, according to official data.

Ibrahim Farag, an education expert and a researcher, said Egypt is turning to the Japanese education model as it is moving ahead with major developmental projects, including the Suez Canal expansion, road networks and the new administrative capital and other housing projects. “And such projects need creative minds to make them successful and maintain their productiveness and benefits,” he added.

Farag also said that the Japanese education model will no doubt face criticism from parents and students because some activities carried out in the system include students cleaning their schools by themselves. “In Egypt, it is not known to have students clean schools instead of having custodians collect the trash. Some people may not accept such an activity,” Farag said.

However, he noted that Egypt can greatly benefit from Japan in integrating technology into education and having exams that measure student skills and teaching them to correlate academic subjects and reality.

According to a global report by education firm Pearson, Japan ranks fourth among the world’s developed countries with the best education systems. The rankings are calculated based on various measures, including international test scores, graduation rates and the prevalence of higher education seekers.

The study notes that while funding is an important factor in strong education systems, having cultures supportive of learning is even more critical — as evidenced by the highly ranked Asian countries where education is highly valued and parents have big expectation.

Egypt’s educational system has been wobbling for years due to government neglect as well as corruption. Overcrowded classes, outdated curricula and aging facilities are the main features of any public school nationwide.

Creating a free system of education was part of late President Gamal Abdel Nasser's socialist reform plan in the 1950s and the 1960s to acknowledge the aspirations of the masses regardless of their social class.

Yet, over the years, the educational system has been eviscerated by a crumbling, corrupt and bureaucratic civil service with untrained, poorly paid teachers, prompting students to take on private tutors to succeed. Educators also say that exams have become more about measuring memorization instead of critical thinking, analysis and innovation.

During the presidency of Hosni Mubarak, expensive private and language schools emerged as public education declined. He was ousted from office in 2011.

In the Global Competitive Index 2016/2017 released by the World Economic Forum, Egypt moved up one spot to rank 115th among 138 countries. Egypt scored 3.67 out of 7 in 2016/2017, up from 3.66 in the previous year, according to the index. The index ranks countries according to 12 factors, including infrastructure, institutions, education, labor market, technological readiness and business sophistication to determine overall economic competitiveness.