IS imposes new rules on education in Syria, Iraq

The Islamic State is leading a cultural revolution in Iraq and Syria, issuing new regulations to bring the educational system in line with Sharia and its Salafist ideology. 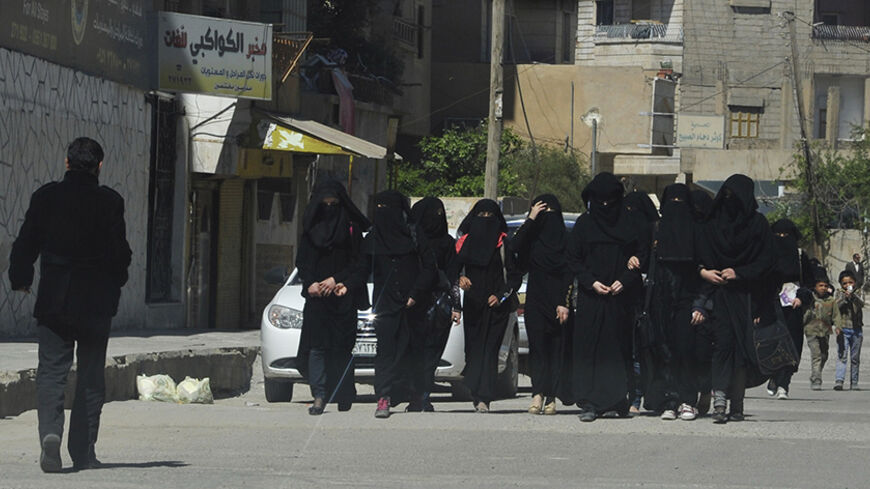 The Islamic State (IS) project goes beyond making a political change for the region’s map. The organization seeks a comprehensive and fundamental change at all levels, whether culturally, socially, economically or politically. It is a major ideological revolution akin to the communist revolutions in Russia and China.

Commonly, such ideological revolutions introduce radical cultural changes in the educational system, as soon as the groups that have launched them take up the reins of political power. Cultural goals are the main priorities of these groups, which view political power merely as a means to achieve these goals.

This has already happened in Russia, China, Iran and other countries that witnessed ideological revolutions and coups. The nature of the cultural changes differs according to the pattern and nature of these revolutions.

The communist revolutions sought to eliminate the bourgeoisie's power from educational and cultural systems. The Islamic revolution in Iran, on the other hand, aimed at the Islamization of science and knowledge by eliminating scientific and scholarly theories that are not in line with their religious visions, expelling teachers from schools and universities who do not abide by religious disciplines.

With the beginning of the school year in Iraq and Syria, IS started to circulate general regulations to reform the educational system to be implemented in schools and universities.

The new regulations included a wide array of reforms to impose a radical cultural revolution in the educational system, by eliminating or replacing some of the materials in the curricula. This educational revolution stems from the hard-line Salafist ideology of IS, which makes it much worse than the Iranian model at the beginning of the Islamic revolution in Iran.

The regulations were introduced within an official statement issued by IS titled, “A good omen from the prince of the faithful to eradicate ignorance and disseminate Sharia sciences.” The statement was made in the name of “Diwan of Knowledge,” which is the new label of the ministries of education and higher education.

Al-Monitor contacted by phone a number of teachers, professors and workers in education in the city of Mosul in Iraq and the Syrian city of Raqqa to check whether or not the information in the flyer is accurate.

Al-Monitor has learned that the reforms include general and basic issues. Labels such as the Republic of Iraq and the Syrian Republic were both changed to become the Islamic State. All topics related to the values of citizenship, patriotism and the like have been omitted, in addition to chants and anthems that might be in contradiction with the religious views of the caliphate state, according to IS interpretations.

This is not to mention gender segregation, banning male teachers and cadres from teaching in girls' schools, and taking all educational and administrative measures according to Sharia. This includes interrupting classes during prayer times, compelling students to wear Islamic garb for men and women alike, in line with the Salafist adherence to Sharia.

The regulations also stipulated canceling classes in music and art, the courses of philosophy, sociology and psychology, and banning the teaching of history and religious education on religious minorities. IS views some educational practices to be religiously forbidden, as they include ideas and theories that are contradictory to the Islamic vision, according to the organization’s Salafist interpretation.

Regarding religious education, IS imposed religious curricula that are already being taught in Saudi Arabia without making any major changes to them.

IS made copies of these curricula, which were distributed to schools and for all classes and grades under the title, “The official curriculum for religious education.”

The organization also distributed pamphlets and booklets on various topics related to Islamic ideology, Sharia and Islamic history under the title, “Additional sources to entice students to read and expand their religious knowledge according to the Salafist vision.”

The analogy between IS and Saudi Arabia religious curricula demonstrates that they are almost the same in terms of Salafist theological bases. This is reflected in the statements of a Saudi source quoted by British journalist Patrick Cockburn in the Independent newspaper. "It's normal: All our life we have lived with IS and its thoughts, its schools and its curriculum,” the source said.

IS preserved the same programs for physics, chemistry, mathematics, English and Arabic languages, but removed some sections such as Darwin’s theory, which is contradictory to the religious theory of creation, according to the organization’s views. New labels and titles have been added to science courses, such as “God’s Laws in Creation.”

Al-Monitor also learned from its sources that teachers and administrative cadres in these areas are greatly concerned. They consider what is happening as a major setback that they cannot confront, as IS has been threatening and terrorizing people while circulating the new regulations that are being imposed by force.

Teachers and school staff have been informed that they are to continue their jobs; otherwise they will face final dismissal and other sanctions that could apply to their families as well.

Moreover, all research works in universities have stopped due to the lack of financial resources, which have been previously provided by the Ministry of Education in Syria and Iraq. IS does not have any interest in supporting such projects.