The state curriculum in Iraq has long been subject to sectarian, political and religious pressure, but education quality is suffering now more than ever. 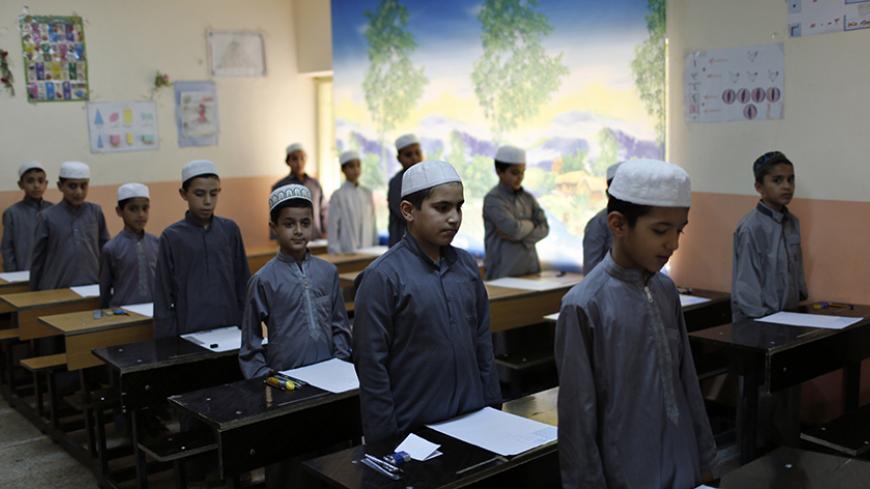 BAGHDAD — Lamia Hassan is a science teacher at a primary school in Babil. She explains natural phenomena in religious terms, such as “the science of God” and “the ability of the creator” when teaching topics such as rain and man’s journey to the moon. She told Al-Monitor that she works in accordance with “school directives, which focus on the role of religion in the school curriculum.”

According to Lamia, “Clerics randomly visit the school and give their thoughts about the need to guide the students to abide by the teachings of Islam.” As one result of the religious influence on education in Iraq, the school has segregated boys and girls since 2003. Before 2003, when Saddam Hussein’s regime fell, school segregation was less common. Clerics considered Saddam’s regime secular.

Observers of educational and cultural affairs in Iraq see a major struggle between two approaches: the religious education promoted by seminaries, councils, on TV and at home, and state education in public schools.

In an interview with Al-Monitor, social scientist Suad al-Khafaji said, “Social education directed by religious belief makes the citizen — since childhood and even before entering school — subject to accepting religious interpretations of events and phenomena, and makes his life conform with religious teachings. So the subject starts believing that every natural or social phenomenon should be subject to the religious gauge.” He added, “This automatic faith promoted by a religious agenda has Islamized education. [Religion] has succeeded in penetrating the state educational curriculum to a great extent.”

The rivalry between the two educational approaches is decades old. In the 1970s, as the leftists dominated the country, Saddam was considered the first secular leader to fight the religious movements. But with the rise of the religious tide in the Middle East following the Islamic Revolution in Iran in 1979, his efforts were in vain. After 2003, the religious influence dominated the state’s agenda. In a pluralistic society such as Iraq's, where there are various religious and ethnic minorities, religious education is a sensitive issue. Every sect has its own interpretation of historical events. History teacher Hatem Alwan cites the example of the death of Hussein ibn Ali.

In an interview with Al-Monitor, Alwan said Hussein’s “biography is taught in public schools in Shiite areas differently than in schools in Sunni areas. The same applies to events related to the rule of the 'rightly-guided caliphs.'”

Researcher and writer Rashid al-Khayoun, who holds a PhD in Islamic philosophy, told Al-Monitor, “The Iraqi state has had a civic, non-religious educational system since the 1920s. In fact, the director of education at the time, Sati al-Husri, tried to end religious education, but his project collided with religious Sunni and Shiite scholars. … During when Saddam joined the religious trend and launched a faith campaign in Iraq, contradicting the ideology of his Baath Party and calling for committing to Islamic teachings and the Quran — by virtue of which night clubs were closed — the latter introduced religion to the curriculum in a forceful way. Some Quranic verses became akin to math equations in terms of heritage. And men and women became separate.” He added, “Religious education has expanded in Iraq at the present time through the opening of Sunni and Shiite religious seminaries, as well as schools for Sunni and Shiite endowments.”

According to Khayoun, it is difficult today to “describe state education as secular or religious, especially since there are religious teachers, religious parties and religious curricula. The religious character has replaced the nationalist and Baathist character of the past.”

History teacher Hassan Sultan told Al-Monitor, “Studying history is very sensitive to Iraqi sects. Each seeks to interpret it according to its own beliefs. … The current sectarian debate is raising cultural barriers, which causes conflicts and disputes.”

Ali Hassan, a researcher at Sheikh al-Tusi University College, told Al-Monitor, “Religious schools in Iraq are nothing new. They used to be scarce, before they really spread after 2003.”

Activist and lawyer Umm Sana al-Hayyali told Al-Monitor, “The curricula of religious schools focus on sectarian beliefs” calling for “the abolition of all non-state schools and the formation of committees to supervise the curricula.”

Hamza al-Krishi, an academic at Babil University, acknowledged to Al-Monitor, “The competition rages between the religious and state approaches to education, because the person with a religious education has an Islamic approach that contradicts the state curriculum, which may contravene Islamic regulations. So they end up colliding.”

In an interview with Al-Monitor, writer and reporter Nassar al-Kriti called for “subjecting education to strict and centralized management so as to avoid the emergence of different curricula and means of [education].”

Kriti believes, “The emergence of institutes and schools with a religious orientation and others with secular trends creates chaos in the administration and sectarian differences in the curriculum.”

Kriti agrees with writer and journalist Riad al-Gharib, who told Al-Monitor, “Since 2003, religious thought has been seeking to dominate the educational system, which is trying hard, through its curricula, to be balanced and convincing to those who control the political power.”

There is no doubt that education in Iraq has become a means of consolidating sectarian identities. Although the official curriculum is supposed to be the same throughout Iraq, it is subject to various agendas, interpretation and analysis, each according to different sectarian, political and religious inclinations.