In Iran, institutional change in favor of women’s participation at seminaries is moving ahead at an exceptional pace. 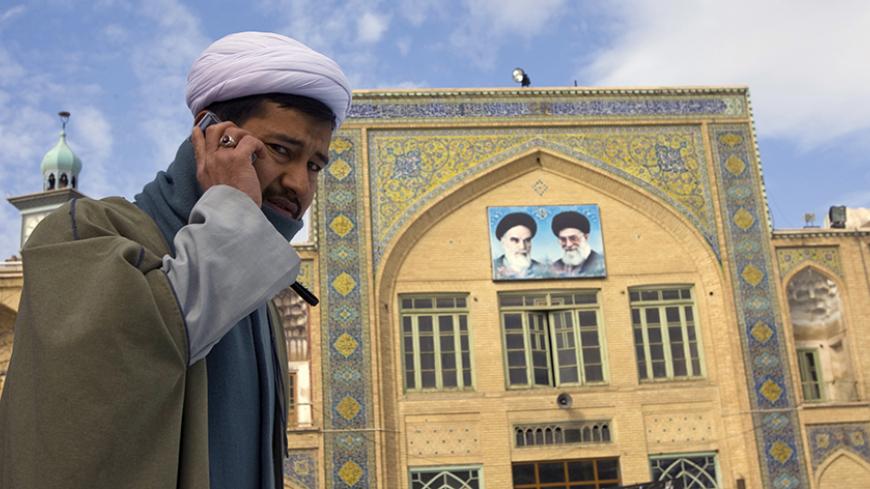 A cleric speaks on his cellphone on the campus of the seminary in Qom, Iran, Feb. 3, 2009. - REUTERS/Caren Firouz

In her book "Qur'an and Woman: Rereading the Sacred Text from a Woman's Perspective," pioneering Muslim feminist Amina Wadud writes, “What concerns me most about 'traditional' tafasir [interpretations of the Quran] is that they were exclusively written by males. This means that men and men's experiences were included and women and women's experiences were either excluded or interpreted through the male vision, perspective, desire or needs of a woman.”

For many who agree with Wadud, the active participation of women in the interpretation of Islamic scripture is necessary to transform the current patriarchal ambience in Islam. Throughout Islamic history, women have never been systematically trained in religious studies. The majority of Shiite religious scholars also consider masculinity an essential requirement for being a grand ayatollah or marja al-taqlid (source of emulation), which is the highest religious authority in Shiite Islam. Within the last few decades, however, things have changed in an unprecedented manner.

Perhaps the most extensive institutional change is underway in Iran. Its scale is stunning: In 2016, 70,000 women studied at more than 500 seminary schools nationwide. More than 90,000 women have graduated from these seminaries, excluding women who study various disciplines of religious studies at hundreds of other institutes of tertiary education. In Tehran province alone, more than 1,600 new students will be admitted into 52 seminary schools the next academic year.

But will these developments improve the situation of women in Iran and result in a more egalitarian attitude toward women in traditional seminaries?

A cursory look at the composition of members of the Policy-Making Council for the Women’s Seminaries — the highest authority overseeing women’s seminaries in Iran — attests to the contrary. Only three of the 16 council members are female. Moreover, many if not most of the managers of seminary schools are male. In addition, female seminarians are being trained in the same patriarchal views that have long been the norm. Therefore, graduates of these centers have hardly been involved in the activism or debates for women’s rights in Iran.

More importantly, the curriculum of the women's seminaries varies significantly from those of men; the women’s curriculum is designed for training preachers rather than scholars and, therefore, does not provide mastery of classical legal texts and other expertise required for being recognized as an independent Sharia authority (mujtahid) among the community of traditional jurists. Rather, women’s courses concentrate more on those materials that are considered necessary for women in the role of a mother or wife. Indeed, of the 90 textbooks used at intermediate-level studies at women’s seminaries, only two overlap with that of male counterparts.

The reason behind the differentiation of the curriculum is partly because men want to maintain their monopoly over the interpretation of holy texts as their own prerogative. This sense of ownership of legitimate readings of Islam has excluded other guilds of religious experts too. For example, while there are hundreds of Sharia experts at modern academic institutes, they have never been able to find their way into higher religious positions, which are normally occupied by those trained at the traditional seminaries.

This exclusionary approach has, however, proved to be unsustainable. Indeed, the very gender roles and ethics that have justified the differentiation of the curricula — including gender segregation — are in themselves instrumental in their failure. For instance, to avoid the intermingling of the sexes in the educational space, women have had to undertake the responsibility for teaching. Thus, the need for advanced courses to train teachers emerged. Only a few years after the establishment of the Women’s Seminaries in August 1984 did hundreds of students enroll in these advanced courses. Moreover, as there was heavy pressure from female graduates for more access to high-level religious knowledge, the ground was paved for the introduction of advanced materials.

At present, there are three different levels of admissions: the general level (equivalent to a bachelor's degree), the secondary level (equivalent to a master's degree) and the advanced level (equivalent to a doctoral degree). While in the early years of the establishment of women’s seminaries, less than 5% of the intermediate instructors were female, the figure has increased to more than 95%. At the 2015 National Research Festival of the Seminaries (also known as the Festival of Allameh Hilli), both the majority of the participants and the winners in all provinces except Qom were female. Furthermore, in October 2015, 15,000 graduates of women’s seminaries were employed by the Ministry of Education, 10,000 were working as instructors/tutors at seminary schools and more than 8,000 were employed as administrative personnel. There are thousands of other employment opportunities for women at other seminary-affiliated centers.

The extensive participation of women in seminary education in the last decade has been partly due to the fact that ultra-religious families have been increasingly avoiding enrollment in public, mixed-sex universities due to their relatively liberal atmosphere. These families also generally hold an unfavorable view of the employment of women in mixed spaces — meaning that even if secular training is pursued at universities, there are few opportunities at the increasingly liberal common workplaces. These considerations do not apply to single-sex seminaries, where not only is the overall space arranged in accordance with orthodox beliefs, but where graduates can also find employment in the same safe havens. In addition, regardless of career considerations, the very acquisition of Islamic knowledge is seen as valuable in itself.

Overall, considering the relatively short history of the institution of the women’s seminary compared to the almost 1,000-year-old men’s seminary, one has to avoid early judgment of the effects and capacities of the former. No matter how much female seminarians embrace or pronounce gender equality, they are already creating a parallel — and undeniably powerful — religious authority that is increasingly becoming independent of men’s intrusions and therefore reflects women’s empowerment.