The religious feminist movement has succeeded in improving the status of women in some parts of the Muslim world, while in others, there is resistance to any change regarding women’s rights. 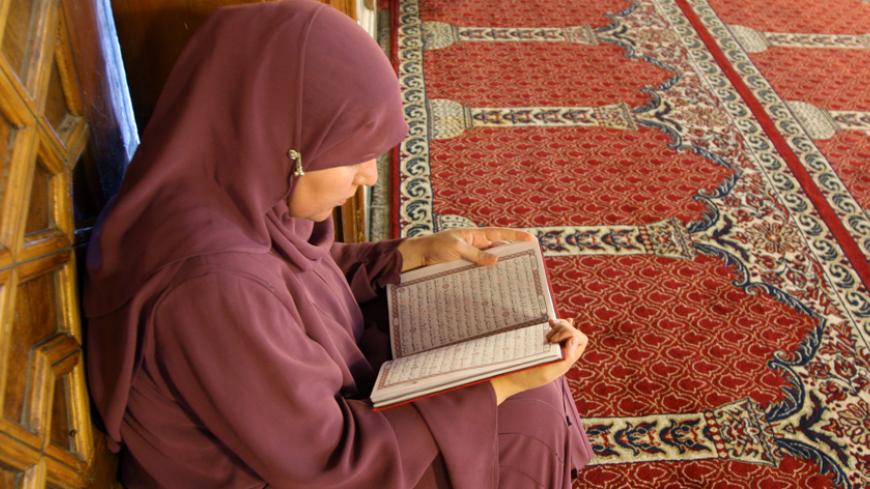 A Muslim woman reads the Quran before iftar, when Muslims break their fast, during the holy month of Ramadan at the historic Umayyad Mosque in Old Damascus, Aug. 26, 2009. - REUTERS/Khaled al-Hariri

In the 20th century and until its peak in the 1970s, religious feminist movements based on nonpatriarchal interpretations of holy texts started appearing in the world. These movements were different from the prevalent secular female currents in the West in that they opted for a religious discourse founded on the texts of clerics, using religious reasoning within the framework of theological and jurisprudential discourse.

This phenomenon, which was not limited to Muslims but included Christian and Jewish communities, among others, came to be known as feminist theology.

In the Muslim world particularly, although feminist theology remained controversial and dubious to secularists, it has left a positive impact on society in the past decades. The religious feminist movement's internal convictions and changes come from within Islamic thought and are not influenced by the West, which would stir sensitivities in non-Western societies. Some religious governments, like Iran's, adopted many reforms that stemmed from the religious vision of feminist movements for women’s rights; while other religious governments, like that of Saudi Arabia, showed strict resistance to any sort of reform to improve women’s position in society.

Islamic feminism aims to fulfill three objectives. First, it seeks to criticize the masculine discourse that dominates Islamic theology and literature in general. Second, it aims to present a suitable interpretation and explanation of the equal rights of women from the Quran and Islamic traditions. Third, it works to criticize and rectify Sharia interpretations that persecute women and undermine their rights.

The history of Islamic feminism was detailed by Amina Wadud, the Muslim researcher of American origin who published “Quran and Women” in 1992. In 2005, she famously led Friday prayers in the Anglican Church building in New York after mosques refused to host the event, sparking controversy among some Muslims. Although Wadud is the best-known figure in this current, she was preceded by a number of feminist researchers and activists with Islamist inclinations in the Muslim world.

Qurratu al-Ayn Tahirih (1817-52) is one of the oldest figures in contemporary Islamic history in the field of religious reforms in favor of women. Tahirih studied at Shiite seminaries in Iran and Iraq, and she memorized the Quran. She was also highly knowledgeable in Shiite theology and jurisprudence, but she believed that the road to reform was a complete departure from Islamic Sharia. She adopted Babism instead, a religious movement founded by Siyyid Ali Muhammad Shirazi in 1844 in Iran. She took off her veil publicly in 1848 and declared her rejection of the old rules and teachings. She later became a source of inspiration for several Western feminist movements.

Long before the Baha’i faith made its way to the West, Europeans were inspired and fascinated by Tahirih. Lord George Curzon described her life as “one of the most affecting episodes in modem history.” The gifted Austrian poet Marie von Najmajer heard of Tahirih in 1870 and was inspired to write her greatest poem on Tahirih ’s life. Marianna Hainisch, the mother of an Austrian president and founder of the New Woman Movement for Austria, claimed to have been inspired that same year. She stated in 1925, “The greatest ideal of womanhood all my life has been Tahirih. … I was only 17 when I heard of her life and her martyrdom, but I said, ‘I shall try to do for the women of Austria what Tahirih gave her life to do for the women of Persia.’”

Remarkably, there were several clerics in the traditional religious scene whose opinions about feminism formed the core of movements demanding women’s rights. In 1995, traditional cleric Mohamad Baqer Mojtahed Kamarei wrote several articles in favor of women’s participation in parliamentary elections in Iran since 1953, at a time when most political elites, even in secular circles, were opposed to this idea and considered it against social norms and virtues.

As for Najaf seminaries, Sheikh Ishac al-Fayad, one the four prominent religious authorities in Najaf, published a book two years ago about women’s rights in Islamic law, titled “The position of women in the Islamic system.” He recently defended women’s right to handle diverse political and leadership tasks in different fields and to drive vehicles. He noted that women’s testimonies are equal to men’s before the judiciary and strongly criticized religious stories according to which women lack men’s various humanitarian virtues, dismissing them as inaccurate historical assumptions.

These opinions left a gradual positive impact on Iranian society. The marriage of girls under the age of 13 was banned, and women were granted the right to divorce in some cases, like when the husband goes missing for four years, and a lot of Iranian woman currently take advantage of that right. Women are also able to demand half of the money they helped their husbands earn during their marital life.

Nevertheless, women’s rights activists from all secular and religious currents are working hard to make progress in various other fields to end all discrimination and persecution against women. According to several reports and studies, the situation of women in Iran is considered better than that in some Middle Eastern societies and even in some societies that are not governed by a religious system, like Pakistan. One of the main reasons explaining the lack of reforms in some Middle Eastern countries like Pakistan and Saudi Arabia is that reform and change never appeared in the first place or never had a remarkable presence in the religious system of these societies. Since Middle Eastern societies are still greatly affected by religion, any positive or negative change within the religious institution leaves a trail on their social, political and legal systems.

When comparing Iran to Saudi Arabia — since both follow Sharia — a pronounced difference appears. Women in Saudi Arabia are still fighting for their basic rights, such as the right to drive. It wasn’t until 2001 that they obtained the right to vote and run for the municipal council elections in a limited way.

The Saudi regime often tries to justify this situation by claiming that Saudi society is conservative and resistant to reform. However, Saudi activist Mai Yamani expressed an opposing opinion in her book “Feminism and Islam,” as she believes that persecution of women and discrimination against them comes from the Saudi religious and political institutions rather than society itself.