Islamic feminist challenges orthodoxy from within

Turkish academic Hidayet Tuksal has made a reputation as an Islamist feminist, studying religious texts and challenging Islamist notions that marginalize women. 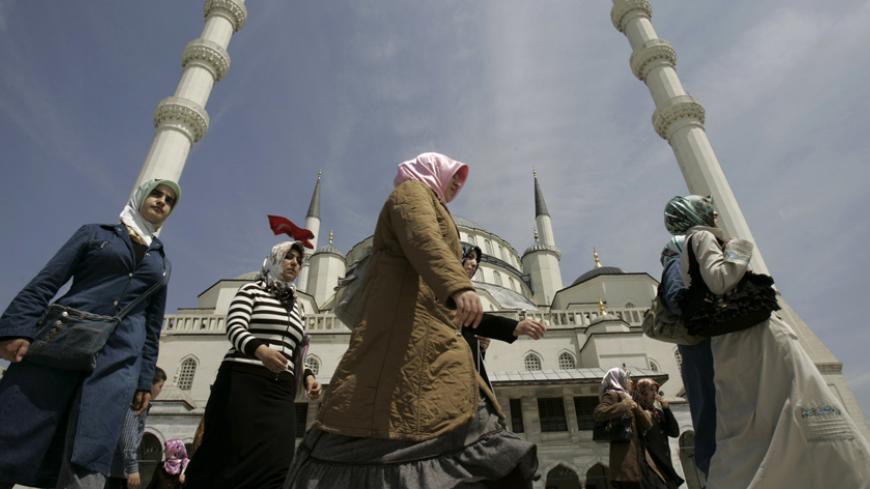 Turkish theologian Hidayet Tuksal, known as an Islamist feminist, is the author of academic studies questioning Islamic narratives about women, including notions such as Eve’s creation from Adam’s rib and the devil following women. While working on a doctoral thesis, she discovered how sexist and misogynistic mentalities shaped religious texts, doctrines and Islamic scholars. She is alarmed that the same mentality continues today.

Tuksal studied theology and is today a lecturer in the same realm at Artuklu University in the southeastern city of Mardin. She wears the Islamic headscarf, which makes her a conservative Muslim. Yet, she has another prominent feature — she holds feminist views. With her outspoken feminist attitude on women’s place in Islam, she has become a well-known figure in Turkey whose views often generate debate.

Born to a family of Muslim immigrants from the Balkans, Tuksal said she was raised in a Balkan culture in which Islam was “a constituent element of one’s identity.” She had a deeply religious mother as a role model. Her enrollment in a theology faculty in 1980 was the result of a combination of pressures. Turkish universities at the time were at the center of bloody clashes between rightist and leftist militants, which led to a military coup the same year. So, Tuksal’s father put a condition, saying, “The theology faculties are the only place free from clashes, I’m not sending you anywhere else.”

During her university years, Tuksal attended the meetings of various groups and joined a religious order, striving to adhere strictly to Islamic teachings. Yet, she also read a lot and sought to explore different points of view. “As my knowledge grew, I began to see that religious doctrine had developed largely on the basis of human interpretations. Hence, I realized I could well have my own interpretations regarding religious doctrine. That was the point of freedom, even if partial, for me,” she said.

While in university, Tuksal began to cover her head, a decision that marked the beginning of a difficult life for her. Veiled women may have acquired freedoms in Turkey today, but until the 2000s, they were the subject of myriad restrictions and bias, both in universities and in working life.

Tuksal had her share as well. She had to abandon her postgraduate studies in philosophy at Ankara’s Middle East Technical University after her headscarf made her the target of attacks and obstructions. As a veiled woman, she could not find a job to her liking either and ended up opening a store, together with her mother and sisters.

“The Islamic attire for women in those years was of styles and colors that one could describe as ‘old-woman attire.’ We opened a store, designing clothes of fresh styles and colors,” Tuksal said. “But this turned out to be a premature endeavor in those days. We eventually closed down the store, both because of my continuing interest in academia and my mother’s fears that [my sisters and I] would shy away from marriage and become spinsters if we were to earn good money.”

Tuksal worked for a while as a teacher in an imam-hatip school, a public school teaching Quranic studies, before she resigned to enroll in a doctoral program. Things, however, went awry again. On Feb. 28, 1997, the military-dominated National Security Council made a series of harsh decisions designed to clamp down on Islamic movements, which included strict bans on the headscarf in universities and public offices. Tuksal could neither do her doctoral studies nor return to her job as a teacher. After 18 years as a jobless woman, she returned to academia only last year as an assistant associate professor at Artuklu University, where she continues to teach today.

Many veiled women shared Tuksal’s fate. Thousands were forced to quit universities and jobs, refusing to take off the headscarf. Their plight became one of the driving forces and even a raison d’etre for the Islamist Justice and Development Party (AKP), which came to power in 2002. Many conservative people struck a strong bond with the AKP because of those grievances.

But Tuksal is also among the few Islamists who do not mince criticism of the AKP. Her brief stint as a columnist for the pro-government Star daily ended over an article criticizing the government. President Recep Tayyip Erdogan himself reportedly called the newspaper’s chief editor to dismiss her.

Yet, it is her attitude on women’s issues that makes Tuksal an outstanding figure in Turkey’s Islamic quarters. She says she decided to study hadith concerning women as a doctoral thesis after she saw how religion was used as a pretext to marginalize and oppress women in the days she taught in the imam-hatip school.

Recalling her work on the thesis — titled “The influence of patriarchal tradition on misogynistic narratives” — she said, “The research I conducted for the thesis made me realize the extent to which the sexist and misogynistic mindset influenced and shaped religious sources, Islamic scholars and doctrine. And when I began to speak publicly about my findings, I saw that this sexist and misogynistic mindset was not a matter of the past but was embraced and advocated as religious [teaching] in contemporary Islamic circles. The issue then grew into a public debate, and today the male-dominant understanding of Islam is something that we can discuss. I see this as important progress, which I personally experienced and witnessed.”

In her thesis, which has since become a book, Tuksal explains how narratives such as Eve’s creation from Adam’s rib, or notions that women should not be allowed to dress nicely and learn how to write were fabricated in time. She argues that such narratives became religious provisions as a result of patriarchal-minded Islamic scholars and rulers interpreting many issues in a way that serves men’s interests. Tuksal’s views on this issue often spark heated debates in religious circles.

And what is a woman’s place in Islam according to Tuksal? Does Islam dignify or degrade women? “To speak of a single Islam is impossible. Various understandings of Islam have existed throughout the years and continue to exist today. Some of them dignify women, others unfortunately degrade them,” Tuksal said. “This, however, is the case also in Christian, Jewish and Indian religious concepts. Hence, the issue of women is not an exclusively Muslim problem, but a common problem for believers of almost all religions.”

Tuksal’s attraction to feminism began during her doctoral research as well. “While working on my thesis, I began to read feminist-minded books to analyze the findings I had compiled,” she said. “Those books opened up my mind, widened my horizon and untangled my tongue.”

She believes Islam and feminism can coexist. “There is no single feminism, just as there is no single Islam. Given this diversity, I can say I feel close to feminism based on the common denominator of rejecting and fighting mentalities that view the male as the essential human being and secondarize the female,” Tuksal said. “As a matter of fact, I believe the real issue we need to discuss is not the coexistence of Islam and feminism, but the coexistence of Muslims and feminists. In Turkey and in many other countries, Muslim women and feminist women struggle side by side. The issue is not about religions but about people.”

In comments on Erdogan’s assertion that male-female equality is against nature, Tuksal says it represents an “obsolete and archaic” rhetoric, but believes it could still be voiced within the scope of freedom of thought.

And what about Erdogan’s calls on university students to marry quickly and have children, his general rhetoric on women and the government’s policy on women?

“Erdogan advising girls to marry and have children is not something that conservative minds will find odd. I think that’s the reason why he speaks so comfortably on the issue. Yet, a huge gap exists between the female profile in his rhetoric and the profile of the women who work for the AKP on various levels. This gap alone could be seen as an indication that his rhetoric does not and cannot have much impact,” Tuksal said. “The model woman in Erdogan’s mind may be in line with his own understanding of Islam, but it is certainly not in line with mine and many other women's. If he does have an intention to impose this model on the whole country, I don’t think he can succeed or make an impact.”