Erdogan vs. Gulen: Who has God on his side?

Political secularism may be the best path to moderation. 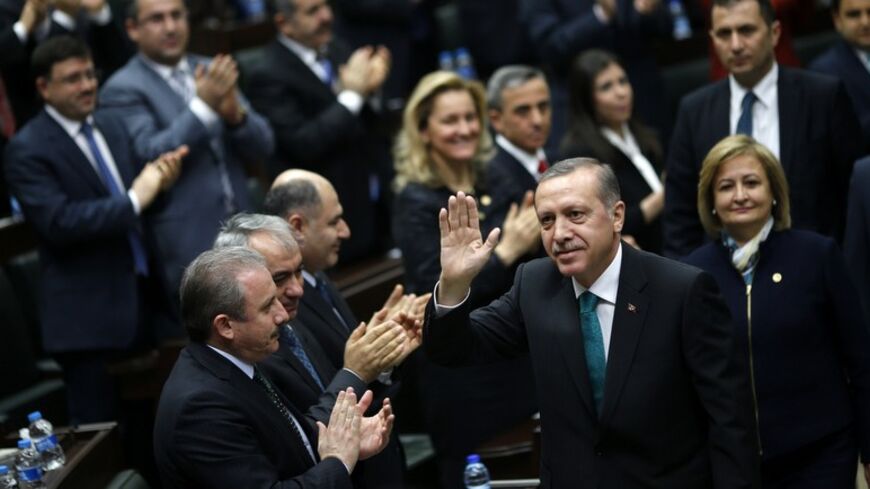 Turkey's Prime Minister Recep Tayyip Erdogan greets his supporters as he arrives for a meeting at the parliament in Ankara, Jan. 14, 2014. - REUTERS/Umit Bektas

In today's Turkey, a single issue dominates the public agenda: the political battle between the government of Prime Minister Recep Tayyip Erdogan and the religious community of Fethullah Gulen. Every recent dispute — the corruption probe against the government, an investigation of an alleged arms-carrying truck crossing the Syrian border, the raid on al-Qaeda — is interpreted as being a part of that big war. Many seem to agree — but not able to prove — that the prosecutors who play an active role in these probes are motivated by their membership in the Gulen movement. They passionately disagree, though, on whether this political motivation should delegitimize the investigations as “coup attempts,” or whether the evidence for corruption and other misdeeds should be the real focus.

For sure, all this is politics — and politics by other means. However, the religious commitments of both sides also bring a theological element to the fore. Both sides believe they are on the right path, not just politically but religiously. Both sides, in other words, seem to believe that God is on their side.

This is somewhat visible in the rhetoric of Gulen — and perhaps not too surprisingly considering he's a religious leader. During the heat of the political tension, for example, he gave an emotional sermon in which he called on God to punish the unjust in this drama. “Those who don’t see the thief but go after those who chase the thief ... may God bring fire to their homes,” he said in a video message to followers that was widely broadcast on Turkish TV. And when Erdogan vowed to go after Gulen movement members in their judiciary “lairs” — likening them to wild predators — Gulen responded, “God sees who is in a lair.”

To be fair, Gulen has never explicitly said “God is on our side,” but some of his followers seem to believe as much. A common argument is that the attacks on the Gulen movement will inevitably “touch Gayretullah,” literally meaning “effort of God” and implying that God can interfere in human affairs to prevent or punish wrongdoings. For example, when the 1999 earthquake shook the headquarters of Turkey’s ultrasecularist military, it was rumored among conservatives that “Gayretullah” might have targeted the anti-Islamic generals.

Meanwhile, the Justice and Development Party (AKP) seems to believe that divine will is on its side. Since the beginning of this latest tension with the Gulen movement last November, Erdogan refered to God dozens of times during his tirades against the movement. In a Jan. 17 speech to the graduates of religious Imam-Hatip schools, he quoted Prophet Muhammad: “Do not fear, worry or get sad; God is with us.” In one of his earlier outbursts against the Gulen movement, he said, “Whatever you do, you will not be able to harm this religion. It is an exalted religion, our Book [Quran] is protected” — as if the issue was Islam or scripture.

Besides these religious themes, both sides in this battle use moralistic arguments. According to voices in the AKP camp, the Gulen movement is a “traitor” to Turkey and Islam, which has engaged in an “unpatriotic” alliance with Zionists, US neocons and others who arguably want to see a “weaker” Turkey. But according to voices in the Gulen movement, the AKP has become a cadre of corrupt politicians — if not “thieves” — along with their lackeys who plunder state resources while using hypocritical rhetoric of claiming to serve Islam. They add that many prominent names within the AKP camp got suspiciously rich, while the members of the Gulen movement still lead modest, honest lives.

However, in the midst of all these religious and moral arguments, there is a third view aired by other religious figures. The writings of Hidayet Sefkatli Tuksal, an Islamic feminist, often combine liberal views with Islamic values. On Serbestiyet, a liberal opinion website, she recently wrote an emotional piece titled, “Leave God alone, and fight your battle on your own!” She wrote, “I am sad and unhappy that both sides try to portray God as on their side, that both sides exploit the name of God in their struggle for power and that they make [other] people feel cold about religion, faith and the faithful.”

Another female Islamic pundit, Sibel Eraslan, wrote an article for the conservative, pro-AKP daily Star, in which she suggested an interesting solution to this intrareligious political conflict: secularism. She wrote:

“The [Gulen] community-AKP conflict invites us to think more seriously about 'secularism' ... [because] the fight for political space and power among the pious, forces us to look for a new referee.”

The term “referee” (“hakem”) is a powerful word in Islam, referring to a neutral and fair judge who can settle disputes. Hence, it is notable that Eraslan, a pious, headscarf-wearing Muslim, thought this “referee” could be secularism, a principle that similarly pious Muslims have often seen as anathema to Islam.

Such theoretical deliberations surely don't top Turkey's political agenda these days, but they should still be considered as significant, at least for the future. Because in addition to Tuksal and Eraslan, other third parties with religious commitments look at this conflict with grief, hoping for a solution that will “build peace among Muslims.” They see the conflict as mainly political, but the religious themes on both sides increase its passion. Why not consider putting religious arguments aside for a moment and discuss temporal issues only as temporal issues?

Of course, this is a burning need, not just in Turkey but also the rest of the Muslim world, for self-righteous Muslim factions to sometimes fight with each other believing that God is on their side. In Syria, for example, most of the current warring factions have claims of Islamic righteousness. If considered wisely, the lesson from these conflicts is that Muslims might use a form of political secularism (or just secularity, to use a more neutral term) to help build peace and moderation among themselves. If considered wisely, in other words, this is a good reason to see secularity, which has often been regarded as a Western-imposed and thus anti-Islamic scheme, as an Islam-friendly principle.